The Meaningless Concept of Ethical War 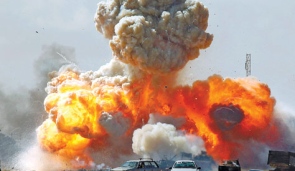 The Case against Intervention

Now, who wouldn’t be heartened to learn that mechanized forces being used against civilians, civilians whose only demand was freedom from tyranny, were destroyed?

One might easily regard intervention, limited strictly to such targets, as both ethical and desirable, but the truth is that intervention is never limited to such targets, and the realities motivating it are loaded with error and, most importantly, with intentions at odds with high-sounding public statements.

The record for intervention is one of greater death and destruction than the threats it is supposed to stop where it is used and of allowing monstrous crimes to go unchallenged where it is avoided. Indeed, it has been avoided always where monstrous crimes are involved; the very situations in which its human costs might be more than offset by what it prevents. Nowhere in the record is there any consistency with regard to principle despite the press releases accompanying every new bombardment.

The glimmer of moral satisfaction we feel at the first instance of an event such as the French jets destroying some of Gaddafi’s armor about to attack a city is badly misplaced, for if ethics or morality is to mean anything, it must absolutely be consistent in application. You cannot meaningfully speak of selective ethics.

At the very time of the events in Libya, we have the same civil unrest and demands for an end to absolute and unaccountable government in Yemen and Bahrain, and they have been met with fairly large-scale abuse and killings by police. Literally scores have been shot dead in the streets. In the case of Bahrain, we have troops from Saudi Arabia – an absolute monarchy much resembling something from the 14th century – entering the country to assist Bahrain’s government in stopping its people seeking freedom.

Now, anyone who knows anything about the Mideast knows that Saudi Arabia would not march a single platoon of soldiers across its border without explicit approval from Washington. It just cannot be otherwise because America keeps an intensely close watch on matters affecting its client-state, Israel, and because Saudi Arabia’s advanced weapons come from America, and also because, following 9/11, most of the perpetrators having been Saudi nationals, Saudi Arabia has had to work long and hard to gain some trust back from Washington.

So where is the moral or ethical balance? Help the tyrant in Bahrain and attack the one in Libya? Why is only Libya a target?

There are many reports, not carried in the mainline press, about Israel supplying the African mercenaries who have been doing most of the bloody work in Libya. They are said to have been supplied by an Israeli military contracting firm connected to Mossad at the kind of high per diem rates which Gaddafi’s oil wealth allows. One of Gaddafi’s sons also made a visit for private talks in Israel in the early days of the rebellion’s repression. Such events, we can be absolutely sure, also do not happen without approval from Washington.

It appears America has both indirectly helped the tyrant while directly, albeit belatedly, fighting him. I don’t see any evidence of ethics in that situation.

Gaddafi certainly has grown into an unpleasant figure, displaying signs of deteriorating mental health while commanding the powers of a fairly rich small state. His early days as a rather dashing and intelligent revolutionary figure – few people recall he was featured in a cover story of the New York Times Magazine decades ago portraying him in rather flattering son-of-the-desert terms, the kind of article about a foreign leader which always has the imprimatur of the CIA – are lost in the reality of a mumbling old tyrant who has proved ready to strike down civilians to maintain his position. Naturally, people feel exhilarated to see him lose some military advantage.

Most humans do appear to be programmed by nature to cheer in situations where there is a clear bad guy and a good guy going after him. That is why blockbuster Hollywood movies and professional wrestling generate billions of dollars in revenue by repeating endlessly the same simple plot with only changes of costume. But world affairs are never so simple.

Just consider Israel’s assault on Gaza a few years ago, a place which is essentially a large, fenced-in refugee camp possessing no serious weapons. Israel killed something like 1,400 people, including hundreds of children, estimated at 400 young souls, and its soldiers committed such barbarities as using children as human shields. One saw pictures on the Internet of blood running like sewer overflow in the streets of Gaza. Yes, hundreds of children killed and with no rebuke from Washington or Paris or London and certainly no threat of having a no-fly zone or other violent measures imposed.

Up to the point of intervention, information from Libya suggests nothing on quite that scale of barbarism had occurred; rather there was the beginning of a conventional civil war with one side having better resources. So why the immense difference in response between the two situations? Why did we see Libyan victims on television, but the worst of what Israel committed could only be found on the Internet? Selectivity is at work always in these matters from the very start.

Not long before the Gaza atrocity, we had yet another invasion of Southern Lebanon by Israel. More than a thousand people were killed in their own land, and here we had the added horror of hundreds of thousands of bomblets from that cruelest of weapons, American cluster bombs, being showered over civilian areas, destined to kill and cripple for years to come. Along the way, Israel showed its contempt for international law by deliberately targeting a group of United Nations’ observers who died bravely doing their duty.

Yet there was no effort to punish or even restrict Israel as we see today imposed on Gaddafi. How can anyone claim that the response in Libya is ethical?

Libya is now being so heavily bombed that some Muslim states which joined the “coalition” are making loud noises about the United Nation’s mandate being exceeded. If you read newspapers from Britain as well as North America, you will know that there is disagreement between the public statements of the British and American governments as to what constitutes legitimate targets.

But when it comes to bombing, America never does anything by halves.

Shortly after the French attack at Benghazi, 124 cruise missiles, mostly American, began destroying targets in Libya. Reports say four B-52s flew from Europe, each with 30 tons of bombs, and three B-2 stealth bombers, carrying a total of 45 two thousand-pound, “bunker-buster” bombs, flew from the United States. And that was just the start.

Despite protestations, American targets certainly included sites associated with Gaddafi himself, his own compound having been destroyed.

And there you have another of many problems with intervention, or, as some like to call it, ethical war: it depends upon the Frankenstein military of the United States because no one else has its destructive capacities, forces which we have seen, again and again, not only kill in great excess but which typically are directed to dark tasks not featured in the propaganda leading up to the effort.

Recall the American “humanitarian” mission in Somalia in the early 1990s, the one that ended with “Blackhawk down.” We were all conditioned by endless pictures of starving Somalis to welcome efforts at their relief, but the American military, instead of serving the roles of distributing relief supplies and guarding those distributing relief supplies – the ostensible purposes of the mission – almost immediately went after what they regarded as “the bad guys.”

They attempted to kill one of the major local warlords with special planes equipped with modern Gatling guns, circling the sky and spraying large-caliber shells in built-up areas, at the rate of thousands per minute, much of that indiscriminate firepower killing innocent people and destroying property in a poor region. Hundreds of Somalis were killed by the American efforts, and some reports put the number at 10,000.

But we will never learn the truth from the American government, which, since its debacle in Vietnam, always suppresses the numbers it kills. It did so in the first Gulf War where tens of thousands of poor Iraqi recruits sitting behind sand walls in the desert were carpet-bombed by B-52s, their bodies later bulldozed into the ground. It did so in Afghanistan, where it regularly has killed civilians for ten years. And it did so in that pure war crime, the invasion of Iraq.

America’s effort to get the “bad guy” in Somalia was an act of complete arrogance and sheer stupidity, clearly reflecting America’s ingrained streak of hell-and-damnation Puritanism and its Captain Ahab obsession with chasing the white whale over whole oceans. All Americans achieved was to make a deadly enemy, as they shortly learned. They ended up, pretty much leaving the country shamefully and forgetting their first purpose in going there, distributing relief to the starving, something Canada’s soldiers and others routinely do without creating such aggression and such violent results.

Recall again President Clinton’s launching a large salvo of missiles in 1998 towards targets in the Afghan mountains and at a Sudanese plant in Khartoum. They were said to be aimed at terrorist targets, but the public was given no detailed information. We do know the plant in Sudan proved to be just what it was claimed by locals, a pharmaceutical plant. Dozens of innocent people were killed and property worth many millions of dollars was destroyed to no purpose, based entirely on incorrect information.

Clinton also launched 23 cruise missiles towards targets in Baghdad in 1993, supposedly in retaliation for an Iraqi-sponsored attempt on former-President George Bush when he visited Kuwait, although the public was given no details of the supposed plot. Even granting there was a plot, if you are entitled to hurl thousands of pounds of high explosives at a distant city owing to a faulty dark operation, what are we to say of the many countries and millions of people who have been victims of America’s many dark operations? What principle is at work here other than might makes right?