Can America Get Away With Murder? 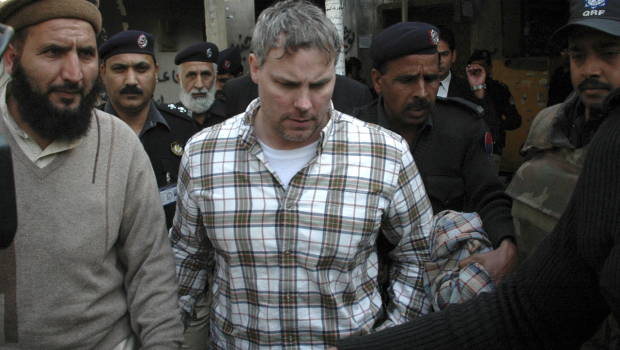 An American Consulate security guard commits cold-blooded double murder and Pakistan is denounced for investigating it. What Does America have to hide?

On the crispy afternoon of January 27, in crowded downtown Lahore, a guy who later identified himself as Raymond Davis, a technical advisor at the US Consulate, Lahore, created a furor by fatally shooting two young motorcyclists riding ahead of his car. He fired 9 bullets from his Beretta with deadly accuracy of a trained marksman, belying the geeky description that he gave about the nature of his job. He fired five bullets through his windshield and pumped four bullets into the boys as they lay on the ground breathing their last as he existed from his car. He called the US Consulate for back up, calmly photographed the bodies with his cell phone but panicked when he saw the crowed turning hostile and fled in his car, losing his way in the downtown area.

The police soon caught up with him, took him into custody along with his belongings and his car, which was found to be locally rented.

The backup consulate vehicle driven by another American, which got stuck in the crowd at the scene of the shooting, crossed over the road divider and drove at high speed against the traffic, in the process running over and killing another motorcyclist. Finding that Davis was gone, it took a U-turn and sped away. 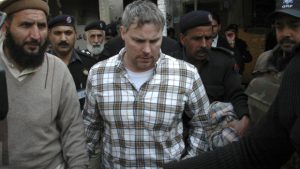 A Diplomat, Security Guard, or a Rambo?

Items recovered from Davis’s car included, in addition to the unlicensed Beretta he was holding, a loaded Glock handgun along with a bucket load of bullets for both guns, three full magazines, a load of M16 shells, GPS tracker, several mobile phones, a satellite phone, wireless sets, a survival kit small telescope, mask, military-grade knives, a wire cutter, a collection of batteries and a mutually exclusive array of business cards. One of these cards listed him as working out of the Peshawar Consulate, another listed him as a defense department contractor and yet another as an employee of a (unregistered and nonexistent) security company called Hyperion-Protective Consultants LLC, with its address as 5100 North Lane, Orlando, Florida. Later, upon inquiry this premise was found to be a closed clothing store in a rundown mall that has been vacant for several months and whose telephone numbers did not respond.

Profoundly puzzling and disturbing was the camera recovered from him loaded with pictures of dozens of madrassas (religious schools) and other sensitive buildings in and around Lahore. Such places have been in the past or are likely to be the targets of terrorism and his interest in such locations, when viewed in conjunction with his demeanor, dubious credentials and questionable items recovered from his car, including a bundle of cash drawn from ATM and all those cell phones that are generally used as bomb detonators by terrorists, point to his possible involvement in some kind of covert US program to finance or orchestrate subversive activities that have recently resulted in the spate of bomb blasts in the country.

Davis was arrested on two counts of murder, and despite protests by the US Embassy and the State Department which insisted that he  is a “consular official” responsible for “security,” he continues to be held pending trial.

Davis initially told the police that he shot the two men in self-defense because they had pointed their guns at him to rob him. This statement was splashed by the State Department and the US media. The statement was later changed and he said he shot them because “he believed that the men were armed”, believing that his life was in danger.

Having completed its investigations, the police have submitted a provisional charge-sheet in the court for proceedings under Section 302 of Pakistan Penal Code. The trial has already begun.

Punjab police chief Tareen told the media last Friday: “We have proof in the form of eyewitness accounts and forensic reports that it was not a case of self-defense. Rather it was a clear murder. He gave no chance of survival to them.” He further said that although the motorcyclists carried loaded weapons, there were no bullets in the chamber and no fingerprints on the trigger, which showed that the gun had not been pointed at Davis. One of the boys was shot in the back as he tried to flee, Tareen said.

Davis is reported to have told the police that he was a technical advisor at the Consulate and this was his 10th visit to Pakistan. Tareen did not answer questions about the purpose of Davis’s visit to the congested area of Mozang and Davis has reportedly not so far explained why he was driving alone and so heavily armed. One US official said he was not authorized to carry any weapon.

Who is Raymond Davis?

The real identity of Raymond Davis became a mystery. The embassy and the State Department first said he was a security advisor at the Lahore Consulate but then on second thought called him a US Embassy employee with diplomatic immunity. The mystery deepened when the Americans later refused to confirm or deny his real name and identity, to confirm his actual station of duty and explain the nature of duties he was performing to justify the immunity they claimed.

They also refused to identify and hand over the driver and the vehicle that crushed the motorcyclist.

How Dare You Arrest our Man?

Apparently concerned that Davis’s continued detention and interrogation might blow his cover and expose his dubious activities, attitude of the State Department became extremely arrogant, harsh and bullying. It stonewalled the police investigation into three deaths, refused to accept the writ of the Pakistan government over a criminal of American origin and refused to recognize the jurisdiction of Pakistani courts to try him for double murder. Their only demand, he should be released without trial.

Despite repeated demands by Punjab government, the Consulate refused to hand over the vehicle and the driver that killed a motorcyclist for investigation. Reports are now emerging that he was smuggled out to the US in violation of the Pakistan’s law.

The attitude of the American administration and the embassy was also inhumane. No regrets were expressed over the brutal killings, no condolences were conveyed to the families of the deceased and no concern was shown for public sentiment. The only sentiment it showed was anger at the delay, murder or no murder.

The Americans conveyed a feeling as if the three dead persons were no more than partridges bagged in an afternoon hunt.

Whatever happened in the span of those 30 minutes on January 27 led to a diplomatic standoff between the US and Pakistan. In an internal exercise to determine Davis’s case, Foreign Minister Shah Mahmood Qureshi was advised by experts in his ministry that there were no grounds for grant of diplomatic immunity to Davis. Accordingly, Qureshi apprised both Zardari and Hillary Clinton. According to leaked information, the Americans hinted that the documentation be ‘adjusted’ for grant of backdated diplomatic status. While Zardari was inclined to oblige and assured them that a suitable solution would eventually be found, Qureshi refused.

Clinton was enraged. In an unusual move, President Obama intervened by calling for Davis’s release. Although this was not officially linked to Davis incident, Washington suspended all high level contacts with Islamabad, called off crucial trilateral talks of Pakistani, Afghani and the US foreign ministers and called off a planned meeting between Clinton and Qureshi on the sidelines of a security conference in Europe. It was conveyed to Zardari that his upcoming visit to Washington was now uncertain and that Obama’s planned visit to Pakistan might not go through. Veiled threats of suspension of economic aid and future cooperation were given amid indications that the strategic alliance between the two countries was at risk.

What Is America Trying To Hide?

For a low ranking contractor — a mere security guard (that is what his title actually translates into) who had admitted having committed the capital offence of killing two people, this is pretty heavy pressure. The Americans were engaging in a lot of sound and fury.

This, therefore, raises a lot of questions. Why is the State Department so nervous and jittery with Davis being held in the custody of Pakistani authorities? What secrets are the Americans afraid of being revealed by him? Why is this man so important that they are ready to sacrifice a 60-year old relationship and a strategic partnership? Do they want to block his trial at all costs because of the risk of his confession that he killed those boys in his line of duty, an admission that would implicate the State Department, CIA and other US agencies?