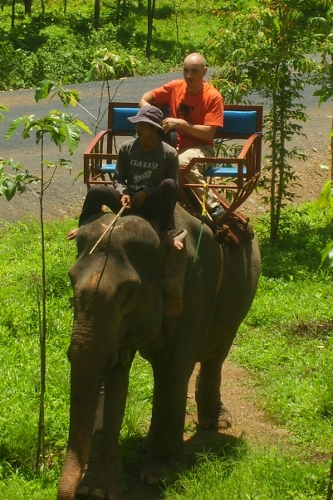 Although the Central Highlands city of Buon Ma Thuot is not on every visitor’s list for destination, it has a reputation of being Vietnam’s national caffeine capital. In March 2011, the city will host an international coffee festival. It is also home to some of the tastiest rice paper rolls. Buon Ma Thuot’s tourism slogan may well be “You’re In Flavor Country.” But there is a greater attraction more addictive than the region’s coffee and rice paper rolls – Yok Don National Park.

Slightly larger than Hong Kong, Yok Don National Park is a popular destination for domestic and international visitors wanting to experience elephant riding and overnight stays with ethnic minority groups such as the E De and Jarai, who live in the nearby hills and farm the land according to traditional practices, Huang, my guide for the day, told me. He also mentioned that grounds near the elephant tracks may become home a resort to cater for wealthy holidaymakers.

Having met several individuals committed to becoming tour guides in cities such as Hanoi and Hue, there was something different about Huang. He admitted to being a regular gambler, unafraid of wagering large sums of money on sports. When I first stopped by his small office, he did not launch into a sales pitch outlining why only he could deliver the perfect tourist package. His first question was, “Which country should I bet all my money on to win the 2008 European Football Championship?”

As a non-gambler, I confessed to not having the slightest idea. An unknown large quantity of money could be riding on what I say. I ended up suggesting Italy. Huang immediately disagreed.

“HA! They cost me 600 dollars last night because they lost to Holland.” At least I knew where he stood on the matter. To make things even worse, Huang explained that he also had to buy everybody drinks for all 20 of his friends. “I regret being popular,” he added.

Before becoming a tour guide in 2003, Huang taught mathematics at a high school between 1997 and 1999 on the outskirts of Buon Ma Thuot, earning $USD50 per month; “standard rate,” he says. While he received lots of respect from his colleagues, students, and their parents, his mind was distracted by the lure of Vietnam’s steadily growing tourism industry, making more money by chaperoning middle-class families from Saigon and international visitors on short-term stays. Flush with extra money, he participated in card games and eventually found sports gambling. “I could never go back to the classroom,” he said. “Imagine if the school found out if I gambled. I would lose face, no more respect.” Being a tour guide helps to cultivate his entrepreneurial spirit. It has also fuelled his desire to improve his English.

“What about France? You think they are good, David?” Huang asked me.

“Why would you support a former colonial power?” I said quizzically.

“Because I love the color and smell of money,” Huang said with a grin. “You know, in the 2006 World Cup, my gambling losses were so bad, I had to sell my Yamaha motorbike. I loved that bike, it was like my identity. But gambling is a hard habit to break, like drinking and smoking.”

Gambling is illegal in Vietnam, but motorcycle (xe om) drivers play card games avidly during their down time, especially when shop closes for their lunchtime siesta. When it is time for large scale football tournaments like the World Cup, football fans are not scared to bet large sums of cash. They adopt a team, wear replica shirts, paint their faces and sing along to the tune of pounding drums. Huang says that he sometimes gets into the face-painting activities, because it makes him feel like he is at the ground, just meters away from where all the action is taking place.

“Are you as passionate when Vietnam is playing?” I asked.

I really was fascinated by Huang’s love of football. He was certainly more into the sport than me. But I was also keen to speak about where we were heading today. Huang said that Yok Don was home to domesticated elephants, buffaloes, monkeys and the elusive white tiger.

“When the park had lots of trees, it was not rare to see the white tiger. But deforestation, logging and more tourists has sent the tigers and wild elephants west towards the Cambodian border,” Huang said to me.

Before we left the city bound to take the bus, I received a warning not to be shocked at the condition of some of the elephants. All sorts of gruesome possibilities entered my head at that point, and I could only hope that he was exaggerating.

The bus arrived to take us into the countryside that would stop near a dirt path leading to an entrance for the Yok Don National Park. It was full of city dwellers going home to spend time with their families and help plant rice for the upcoming wet season. I could feel 40 pairs of eyes scanning me; their prolonged glares, combined with the stifling humidity, make me feel like a roast pig on a rotisserie. To my right was a vacant seat, but since a lady was breastfeeding her young baby, I opted to stand. An elderly person was more deserving of the seat. Passengers of all ages and occupations – police officers, businessmen, farmers, mothers, and students – were on board.

We soon left the center of Buon Ma Thuot, the symphony of buildings, orderly traffic, outdoor food stands, and war statues quickly replaced by an endless sequence of dirt roads filled with holes, farmers riding bicycles, and rice paddies. Suddenly, the driver slammed on the brakes to avoid hitting a runaway calf, and I hurtled forward. I avoided colliding with the mother nursing her baby, but still felt a thud. Fortunately, it was my hands which hit the window. It startled the child, and as his wide brown eyes passed glances with mine as I attempted to regain my composure, I thought this would send him into a crying fit. Thankfully, it did not. Students in neatly pressed uniforms of white and blue giggled as I straightened myself and offered a sheepish grin.

Huang, who was standing in front of me, whispered, “Try not to stare directly at people. They look scared of you because you are different.”

I urged for somebody to break the ice. Then a female student sitting behind me stood up. I assumed that she was about to get off the bus, so I moved aside as far as I could. Instead, she smiled and spoke a few words in Vietnamese to Huang as I looked on.

“David,” Huang said, “This girl would like to practice speaking English with you.”

The girl sat back down again and asked me to sit next to her. Looking at Huang for assistance as if to ask for help, I initially stood next to her seat, but out of fear of offending her, I sat down. Her skin was darker than most people I had met in Vietnam, a sign that she may have been a member of one of the ethnic groups from the region.