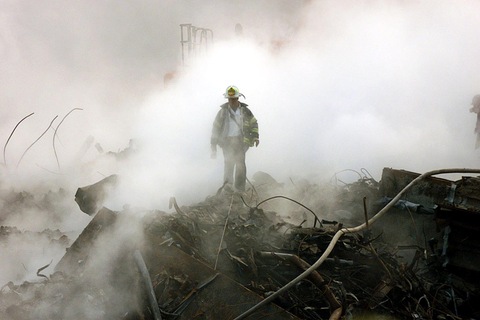 The tragedy at the World Trade Center (WTC) on September 11th, 2001 continues to affect many thousands of first responders who sacrificed their own health while restoring lower Manhattan and attempting to recover survivors and victims’ remains.  Recently, H.R. 847, otherwise known as the James Zadroga Bill, was signed by President Obama in an effort to provide services and compensation for those whose health was compromised through exposure to the toxic dust and gases at Ground Zero.  However, these first responders also need help to understand how their illnesses originated so that improvements in treatment can be made.  In response to this need, concerned citizens should consider the possible correlation between evidence for energetic materials at the WTC and the environmental exposures which appear to have caused so many illnesses in the first responders.

The 9/11 first responders suffer from a range of different illnesses, some of which are rare in the general population.  Some of the illnesses can be attributed to the high pH of the WTC dust.  We know the extent of the pH problem thanks to EPA whistleblower, Dr. Cate Jenkins.[1] The very high pH of the dust inhaled by 9/11 first responders is a probable cause for the general deterioration of lungs and their function, due to the dust’s corrosive state.  As Dr. Jenkins wrote, “Corrosivity would have acted directly to cause respiratory chemical burns, and also would have increased the toxic properties of other pollutants from the WTC by facilitating their entry into the body through the respiratory system.”

Commonly observed conditions among first responders include reactive airways dysfunction syndrome (RADS), caused by exposure to high concentrations of irritants such as caustic and metallic dusts; upper respiratory illnesses such as sinusitis and laryngitis; and lower respiratory disorders such as asthma and what is known as World Trade Center cough.

Less understood, and requiring further study, are unusual illnesses of the immune system commonly observed in the WTC first responders.  These include various types of interstitial lung disease, such as eosinophilic pneumonia, granulomatous pneumonitis, and bronchial obliterans.  Environmental triggers for these illnesses include aluminum silicates, which have been found in the lungs of WTC first responders at high levels in “unusual platy configurations.” [2]

These findings have, until now, lacked an adequate scientific explanation.  But recent research suggests a correlation with the causes of the destruction of WTC buildings 1, 2 and 7.  Aluminum oxide – a potential cause of the observed pulmonary fibrosis – is a product of the thermite reaction, and there is now considerable evidence for the use of thermite in the destruction of WTC buildings 1, 2 and 7.[5] Additionally, aluminum and silicates – potential causes of the observed illnesses of the immune system – are components of nanothermite formulations.

Thermite is a mixture of aluminum powder and a metal oxide that, when ignited, exhibits an extremely exothermic reaction producing aluminum oxide and the metal in molten form.  The thermite reaction has been utilized for welding railroads rails and for cutting metal as with anti-tank grenades.  Thermite has also been used to develop patented devices for the demolition of structures.  One such device allows for demolition of a concrete structure “at a high efficiency, while preventing a secondary problem due to noise, flying dust and chips, and the like.”[6] A recent experiment shows that thermite can cut structural steel efficiently.[7]

Sulfur is often added to thermite mixtures to improve the burn qualities and it is then called thermate.  Nanothermite, or superthermite, is a more recently developed variation on thermite in which the aluminum and metal oxide are mixed on the nanometer scale, allowing for more rapid energy release.  Nanothermite can be a simple mixture of nanometer-scale powders or it can be made in a silicon matrix, through a solution-based technique, resulting in “sol-gel” nanothermite.  The sol-gel process allows for the use of organic materials which expand during the reaction, providing more explosive power.

A review of WTC environmental testing results produced by EPA and the University of California was published in 2008.[10] That review showed that air and aerosol emissions of sulfur and silicon compounds at Ground Zero provided evidence that energetic materials such as thermite and nanothermite were present.  The silicon compounds (i.e. silicates) were indicative of the sol-gel variety of nanothermites, and the sulfur compounds suggested the presence of thermate, a sulfur containing derivative of thermite.

EPA also found very high levels of volatile organic chemicals (VOCs) that, like the aluminum, sulfur and silicon compounds, were discovered to be present in unusual spiking patterns.  These spiking patterns suggest that extremely violent, explosive or incendiary events were occurring within the pile at Ground Zero over a period of months.  If fires were the cause of these events, they would have had to have been fires that were driven by an agent that contained its own oxidant, as a thermite or nanothermite mixture does.  This is because extensive efforts were made to put out the fires at the WTC site, including the use of millions of gallons of water and chemical fire suppressants, with little or no effect.  In addition to the tons of dust from the buildings’ destruction and the rainfall events that occurred, these firefighting efforts ensured that normal fires would not have continued.

The presence of thermitic materials explains why the fires lasted for so many months, deep within the oxygen-poor pile, and why the fires were resistant to the extensive, but ineffective, efforts to extinguish them.  In this scenario, the extreme levels of VOCs would be the result of the complete thermal degradation of all plastic materials in the thermitic (incendiary) fires.  In normal structural fires with limited ventilation, plastic materials often burn incompletely.

The pattern of energetic events at Ground Zero, indicated by the spikes in emissions, was different than the expected trend of emissions from a typical structure fire.  As was the case for other structure fires, particulate matter (PM) emissions at Ground Zero were high at first and then died down completely.  However, VOC emissions occurred for a longer duration, and the extreme, spiking emissions of VOCs, and components typical of thermitic mixtures, continued for many months after the particulate matter had died down.

Other unusual results from EPA monitoring included a compound called 1,3-diphenylpropane (1,3-DPP), which had never been seen before in any EPA studies yet was said to be abundant and pervasive at the WTC.  Further investigation is called for due to the fact that 1,3-DPP is used to functionalize nanostructured silicas that are similar to nanothermite materials.[11]

Related to these environmental findings is the fact that first responders have been getting cancers at elevated rates.  Many types of cancers have been reported including leukemia and the rare disease called multiple myeloma.  The most prominent environmental cause of leukemia is benzene, which is one of the VOCs seen prominently in energetic spikes of emissions at Ground Zero.  Benzene was detected at the WTC at levels that were dramatically higher than ever seen before in structure fires; even higher than what was seen at a large fire in a plastics factory.[12]

As for multiple myeloma, researchers associated with the World Trade Center Medical Monitoring and Treatment Program at the Mount Sinai School of Medicine examined many sick first responders.  One result was that they found eight times the expected level of multiple myeloma in people below the age of 45.[13]

Environmental factors that cause multiple myeloma include phenoxyacetic acids, which are compounds that are structurally similar to 1,3-DPP.  Another causal factor is DDT, a highly chlorinated diphenylethane.[14] Diphenylethane is structurally very similar to diphenylpropane (DPP).  This suggests that the observed presence of 1,3-DPP could be a causal factor of the multiple myeloma seen in WTC first responders, in that derivatives of 1,3-DPP might be responsible for the illnesses.