What’s Behind the Tumult in Egypt? 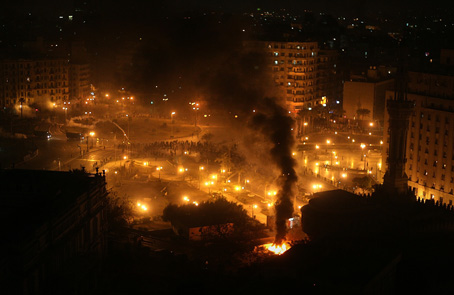 Of course, this US backing for such revolutionary upheaval does not accord with America’s cultivated image as a defender of reactionary regimes. This is the image maintained by both mainstream and alternative media, one such example, stating that: “Egyptian officials know that because their country is an official ‘friend of the US’, Cairo’s undemocratic behavior always gets a pass in Washington….”[5]

However, the public image of the USA is far different from the reality, and the USA has embarked on a world revolutionary mission since the time of Woodrow Wilson. The US Establishment, far from being the epitome of conservatism, has been up to its neck in subversive activities throughout the world, which were often misidentified by conservative commentators as “Soviet” plots. The “color revolutions” are a continuation of a process that has been going on since Woodrow Wilson expounded his revolutionary manifesto for remaking the world in America’s image: The Fourteen Points.

US Secretary of State Clinton has been less than helpful to America’s supposedly great friend President Mubarak, whom the media tells us the “West” is propping up, when she stated:

We’re trying to promote an orderly transition and change that will respond to the legitimate grievances of the Egyptian people, which the protests are all about.

We are urging the Mubarak government, which is still in power, we are urging the military, which is a very respected institution in Egypt, to do what is necessary to facilitate that kind of orderly transition.[6]

This is a blatant call for Mubarak to go, and an openly stated declaration that the USA is aiming to secure “regime change” through revolution. Why should it be up to the Secretary of State of a corrupt, failed and bankrupt state to dictate what political course another state should take?

The Hand of Soros – Again

The above-cited UNFree Media ridicules allegations that George Soros, the currency speculator and patron of the world “color” revolution is a factor in the current turmoil, dismissing such claims as “conspiracy theory.” Yet the same article quickly goes on to state that a new monthly opposition magazine Wasla, which is widely distributed to strategic quarters such as the military and academia and has an electronic edition read throughout the Arab world:

[A]ims to link Arab bloggers with politicians and it was in fact launched at the initiative of a women’s group backed by Soros. Wasla — or “The Link” — is being touted as a first for the Arab world, with plans for articles by bloggers as a way of giving them a wider readership. It is published by the Arabic Network for Human Rights Information and financially supported by the Open Society Institute created by Soros, said ANHRI director Gamal Eid. “We want to challenge our audience, and open its eyes to the changes society is experiencing, particularly through youths and blogs in which they appear,” he said.[7]

It might be recalled that Soros’ Open Society Institute funded the primary opposition voice in Tunisia, Radio Kalima.[8]

The Soros network has been working extensively in Egypt. The Egyptian Initiative for Personal Rights has the aura of a Soros front about it, and at the least works in tandem with the Open Society Justice Initiative,[9] and is an “OSI grantee.”[10]

The Open Society Foundations will consider projects from domestic and international NGOs or civil society groups active in Egypt. Coalitions of NGOs are also encouraged to apply. …[11]

As one would expect, NED, the Congressionally-funded neo-Trotskyite Establishment Bolsheviks that work in tandem with Soros to ferment America’s version of “world revolution,” have been very active in Egypt, as they have in Tunisia.[12] NED’s 2009 report for grants to Egypt includes, but is not limited to:

Andalus Institute for Tolerance and Anti-Violence Studies (AITAS)
$48,900. The description of the purposes for this grant again, as in Tunisia, points to NED’s activities in funding and training revolutionary cadres in precisely the techniques that are being used in the current strife:

To strengthen youth understanding of the Egyptian parliament and enhance regional activists’ use of new technologies as accountability tools. AITAS will conduct a series of workshops for 300 university students to raise their awareness of parliament’s functions and engage them in monitoring parliamentary committees. AITAS will also host 8 month-long internships for youth activists from the Middle East and North Africa to share its experiences using web-based technologies in monitoring efforts.

Arab Foundation for Supporting Civil Society (AFSCS)
$25,000. “…AFSCS will conduct four training workshops for a total of 100 journalists and representatives of civil society institutions on monitoring violations against civil society organizations, and extend its outreach on these efforts through a web site and newsletter focused on civil society issues.”

To promote youth expression and engagement in community issues through new media. BTRD will train youth between the ages of 16 and 26 in the use of new and traditional media tools to report on issues facing their communities. BRTD will also create a website for human rights videos and new media campaigns in Egypt. The website will host trainees’ completed projects and provide a blog-like forum for them to engage in an ongoing dialogue on their projects.

To engage civil society organizations to participate in the democratic process by strengthening their capacity to advocate for free market legislative reform, and to build consensus on needed changes to the Egyptian legal environment to remove impediments to competition in a free market.

Again, the above is telling. NED’s global propagation of the virtues of “free market’ economics is more likely to indicate the real purpose behind these “color revolutions” than the touted slogans about democracy.

To expand the use of new media among youth activists for the promotion of democratic ideas and values. EULY will train 60 youth activists to use filmmaking for the dissemination of democratic ideas and values. The Union will lead a total of four two-month long training workshops in Cairo to build the political knowledge and technical filmmaking skills of participating youth involved in NGOs. Each participating NGO will then produce and distribute a short film about its organization’s mission or about an issue for which they are advocating.

Ibn Khaldun Center for Development Studies (ICDS) $65,000 “To disseminate information on civil society and democratization in the Arab world and promote democratic ideas and values…”

Lawyers Union for Democratic and Legal Studies (LUDLS) $20,000 “To support freedom of association by strengthening young activists’ ability to express and organize themselves peacefully within the bounds of the law…”

Our Hands for Comprehensive Development $19,200 “To engage Minya youth in civic activism and encourage youth-led initiatives and volunteerism…”

Project on Middle East Democracy (POMED) $45,300 “To explore the feasibility of establishing a Cairo-based policy center to support Egyptian civic organizations’ and activists’ ability to advocate for policy reforms.”

To expand and maintain a network of youth activists on Egyptian university campuses and to encourage the participation of university students in student union elections and civic activities on campus. Youth Forum will conduct a civic and political awareness training program for 150 university students in the Gharbeya, Suez, Minya, and Assiut governorates.[13]

Given the nature of the funding by NED, of its focus on “youth activists” and their training into cadres, and the use of new technologies, the portrayal of the Egyptian riots as “spontaneous” seems implausible. They have been, like others around world, well panned, for years in advance, waiting for a catalyst.

One of the common aspects of the “color revolutions ” in whatever part of the world they “spontaneously erupt” (sic), is that there always seems to be an internationally-respected figure waiting in the wings, ready to assume leadership; and it also seemingly always happens that by coincidence, this respectable leader has been associated with George Soros. Mohamed ElBaradei fits the role. ElBaradei, as is now widely recalled, achieved his eminence on the world stage as a Nobel Laureate and as Director General of the UN International Atomic Energy Agency.

In February 2010 ElBaradei helped form a non-party movement, the National Association for Change. ElBaradei is on the Executive Committee of the International Crisis Group, yet another globalist think tank promoting the “new world order” behind the facade of “peace and justice,” or of the “open society,” as Soros terms it. ICG was founded in 1994 by Mark Brown, former Vice President of the World Bank. Soros is a committee member, along with such luminaries of peace and goodwill as Samuel Berger, former US National Security Adviser; Wesley Clark, former NATO Commander, Europe; and sundry eminences from business, academe, politics and diplomacy of the type that generally comprise such organizations.[14]

“Senior advisers” of the ICG include the omnipresent Zbigniew Brzezinski, former US National Security Adviser, and founding director of David Rockefeller’s Trilateral Commission, an individual up to his neck in seemingly every globalist cause and think tank going, and a de facto foreign policy adviser for Pres. Obama; and Lord Robertson of Port Ellen, former Secretary General of NATO.[15] Financial backers of the ICG include the Ford Foundation and Open Society Institute.

The tumult in North Africa could conceivably backfire on the globalists terribly and create a quagmire of the Iraq variety. At the moment however, the indicators seem to be that the “spontaneous” regional tumult has been carefully planned and funded for a long time, and that the “revolutionary” potential of the bourgeois “youth activists” is about as phony as that of their 1960s American forebears in the “New Left,” who were created sand sponsored by the same types of plutocrat and for similar reasons.

[14] “Crisis Group Board of Trustees,” http://www.crisisgroup.org/en/about/board.aspx