Egypt: The Day of Reckoning 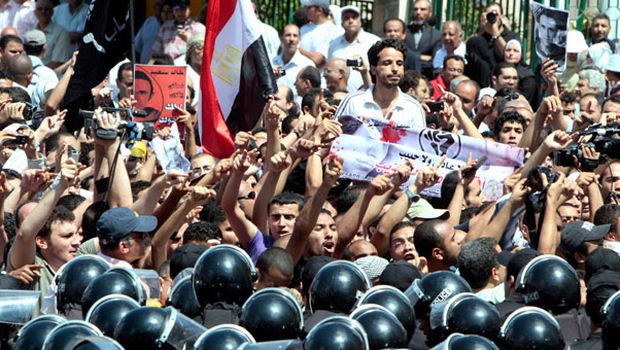 No one anticipated that an internet campaign for a “Day of Wrath” in Egypt would have a turnout beyond what the organizers would have hoped in their wildest dreams. No one expected that a day of wrath would turn to continued days of fury.

Protesters spilled into the streets in an unprecedented display of anti-regime rage. Throngs in the sprawling city of Cairo marched without being deterred by the oppressive state apparatus. They broke police cordons and encamped large squares. The demonstrators called the day of Wrath an end to an era of silence, acquiescence, and submission. A wave of protests erupted and swept through other cities in Egypt as well. 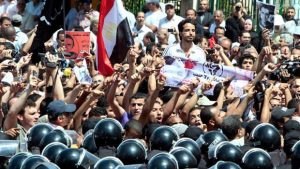 The stunning spectacle of crowds surging into the streets, singing the national anthem, and chanting angry slogans to express ire toward the regime took everyone by surprise. The security forces were taken aback by the anger of the defiant demonstrators.

Police were relatively restrained in the outset, allowing the demonstrations to swell. Then, security forces came down with a heavy hand before things got out of hand. Rows of riot police holding protective shields, equipped with clubs and armored carriers, tried to suppress the demonstrations. They thrashed protesters with batons, firing rubber bullets and tear gas, and dragging away demonstrators. Security reinforcements, however, still cannot contain the Egyptian fury.

Egyptians lost their fear of retribution, and the regime has been rattled by the scale of the demonstrations. This is considered the most serious social unrest in recent memory in a country where the regime ruled with little toleration for dissent. The protesters expressed their pent up frustrations. Their concerns were distilled into one overriding demand: an end to Mubarak’s regime. This is the day of reckoning for a regime that lost touch with its populace; a regime that continued its utter disregard for the national will.

These events unfolded against a background where the world watched the Tunisian revolution that overturned the regime of Ben Ali. Observers have unanimously wondered if Egypt could be taken by contagion, if Egypt is teetering on the brink of a revolution, and whether Mubarak will face a similar fate to that of Ben Ali?

Some have argued that the Egyptian regime is not likely to crumble in a domino fashion. The proponents of this point of view argue that there are unique features of Egypt that would prevent it from falling into the same fate.

First, Egypt does not enjoy a high level of education, which suggests that the level of political maturity and social awareness is not high.

Second, the significance of the Islamist presence in the political landscape is a usual scarecrow. That would allow the regime a free reign with the blessings of the West.

Third, the Egyptian military and armed forces are likely to interfere in favor of the regime, as Mubarak has been assiduous in courting military circles.

Fourth, the Egyptian regime, despite its ruthless grip on power, created a vent for fury as it tolerated some form of freedom of expression to fend off possible fury and absorb discontent.

Fifth, Egypt’s strategic significance implies that international forces will not allow chaos and turmoil in Egypt.

Finally, the Egyptian regime is a quick learner when it comes to its survival and can adapt easily when challenged.

The latest developments have proven all these analyses short of insightful. The Tunisian revolution gave an unimaginable momentum to the cause for change in Egypt. The revolution eliminated the psychological barrier and punctured the fear factor that usually impedes Egyptians from standing up for themselves. Egyptians have shown political maturity, calling for their demands even without any clear political leadership. The slogans brandished are patriotic, and not ideological.

In addition, the regime proved it did not learn the lesson of the Tunisian precedent. Despite these developments, the Egyptian officials were nowhere to be found. Mubarak and his Prime Minister, until this moment, did not bother to address the people. The regime did not declare any significant changes to absorb the discontent — not that it would change anything at the moment. This only reflects the inability of those in power to provide any concessions in fear that it might embolden the protesters. Not surprisingly, the lack of concessions caused the fury to escalate. Besides, any cosmetic changes will not be acceptable by Egyptians, who believe they have given the regime a huge chance for decades.

The regime cannot ask for further forbearance. The legitimacy of the regime, if it had any to begin with, is over. The days of wrath are the beginning of the end for the Egyptian regime. This will open a new chapter in Egypt and the entire region.