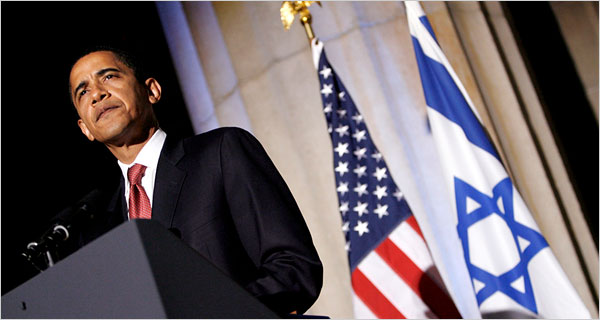 Even those familiar with the long and shameful history of America’s appeasement of Israel were taken aback by the Obama administration’s extraordinary offer to Netanyahu.

In exchange for a paltry one-off 90 day freeze on illegal settlement expansion in the occupied West Bank (excluding East Jerusalem), Israel will get 20 F-35 stealth fighter jets worth $3 billion and a slew of other goodies. Yet Secretary of State Hillary Clinton reportedly gave up to eight hours with Netanyahu trying to persuade him to accept “one of the most generous bribes ever bestowed by the United States on any foreign power.” Praising the Israeli Prime Minister for eventually agreeing to put the offer to his security cabinet, President Obama took it as “a signal that he is serious.” 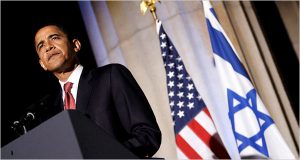 But is there any reason to believe that Netanyahu is any more “serious” about consenting to the creation of a viable Palestinian state today than he was in 2001? In a video aired on Israel’s Channel 10 this summer, Netanyahu was seen during the second intifada bragging to West Bank settlers about how he had sabotaged the Oslo Accords. “I’m going to interpret the accords in such a way that would allow me to put an end to this galloping forward to the ’67 borders,” he told them. In that secretly filmed conversation, Netanyahu also revealed his dismissive attitude toward the United States. “I know what America is,” he said. “America is a thing you can move very easily, move it in the right direction. They won’t get in the way.”

And there is good reason for the Israeli leader’s arrogance. In a pre-midterm election interview with the Jewish Daily Forward, Congressman Gary Ackerman stressed that “Israel’s best bet for addressing any concerns about Obama’s policy” was for the Democrats to retain power. As evidence of their pro-Israel influence, Ackerman and other Jewish Democrats cited “the forceful criticisms they conveyed to the White House when they thought that Obama was leaning too hard on Israel.” Ackerman, who chaired the subcommittee on the Middle East and South Asia of the House Committee on Foreign Affairs, said that if Israel wanted “positive influence on the White House” it needed what he called the “first-class team” of Howard Berman, Barney Frank, Henry Waxman, Sander Levin and himself to continue chairing key House committees, because “we are all pro-Israel and we all have major, major, major influence in the executive branch.”

The Republicans’ subsequent gains in those midterms, however, are only likely to boost Netanyahu’s confidence in his ability to move America “in the right direction.” On the eve of his November 11 meeting with Hillary Clinton, the Israeli Prime Minister had what has been described as an “unusual, if not unheard of” (read: illegal) one-on-one meeting with incoming House Majority Leader Eric Cantor. According to Cantor’s office, the Congressman assured Netanyahu that “the new Republican majority will serve as a check on the Administration.” It wouldn’t be the first time that Cantor— set to become the highest ever ranking Jewish member of Congress—has attempted to undermine official U.S. policy in Israel’s behalf. Last year, while leading a delegation of 25 Republican congressmen to Israel, Cantor publicly criticised the Obama administration for interfering in such internal Israeli matters as the eviction of Palestinian families from their East Jerusalem homes and the ongoing 43-year Jewish colonization of the West Bank.

Given who has been shaping Obama’s Middle East policy, his administration may not require that much checking though. Since 2002, he has been advised by Lee Rosenberg, a key member of “a close-knit network of Chicago Jews,” who, in the words of the Chicago Tribune, “nurtured and enabled” Obama’s political career. According to Rosenberg, the then U.S. Senate hopeful “reached out” to the jazz recording industry entrepreneur and venture capitalist “to learn more about the issues affecting Israel and Middle East, and the U.S.–Israel relationship.” Later, when Obama’s Chicago backers made it clear to him that Israel was an issue “he had to get educated on,” Rosenberg accompanied the then-senator on his first trip to Israel, where he learned “an appreciation of the security needs.” A longtime board member (and currently president) of AIPAC, Rosenberg also introduced the presidential candidate at the pro-Israel lobby’s 2008 conference, when Obama, in contradiction of international law, vowed that Jerusalem “will remain the capital of Israel, and it must remain undivided.”

Dennis Ross, one of the principal authors of that speech, is also the originator of the incentive package. Having convinced Obama of the need “to come off as friendlier” to Netanyahu, the president’s current top adviser on the Middle East worked closely with Ehud Barak and Yitzak Molho, Netanyahu’s adviser, on preparing the original proposal which Netanyahu subsequently rejected. Ross, dubbed “Israel’s lawyer” for his over-solicitousness to Tel Aviv’s interests as President Clinton’s chief negotiator, was accused by an American government official earlier this year of being “far more sensitive to Netanyahu’s coalition politics than to U.S. interests.” A fellow at the AIPAC-sponsored think tank, the Washington Institute for Near East Policy, he also served, until his government appointment, as founding chairman of the Jerusalem-based Jewish People Policy Planning Institute, which views intermarriage with non-Jews as an “insidious” challenge. On hearing that Ross had joined Obama’s team, one Chicago-based pro-Israel activist commented, “now … we have no concerns whatsoever.”