A day visiting Uncle Ho and my new Hanoi family 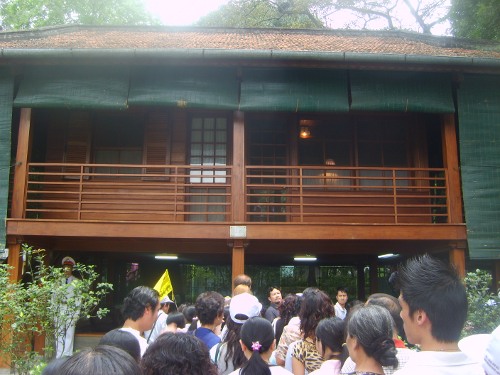 Hanoi at 7am is abuzz. The narrow streets near Hoan Kiem Lake are alive with the sound of civilian life revving at full throttle. Motor scooters zip down the street; street sweepers keep everything in order; and men and women ride their bicycles, inviting the neighborhood to get their fresh produce of eggs, fruits and vegetables. Tables at eateries are crammed with people slurping delicious soup noodle dishes. I could really see myself fitting in here quite nicely.

After spending 15 minutes sipping my ca phe sua da (Vietnamese coffee) and perusing through the French-language newspaper Le Courier De Vietnam, this seemed my definition of heaven. Then I looked at the notes I had written down on a piece of paper the night before and realized the promise I had made to devote part of the day to Vietnam’s modern father, Ho Chi Minh. His cult-like status is a major drawing card for visitors, and regardless of how one feels about his leadership, a visit to Vietnam, especially Hanoi, is not complete without understanding the man’s impact as a guerrilla leader, president of North Vietnam and figurehead. To locals who revere him, he is known as ‘Uncle Ho’. 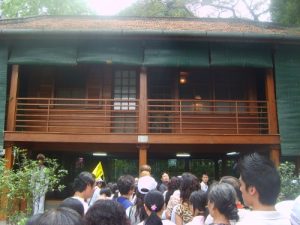 The Ho Chi Minh Museum, mausoleum and residence provide an excellent insight into the man who provided inspiration for individuals whose lives were interrupted by conflict. However, attending on Saturdays, the busiest day of the week, was probably not a wise idea. The mausoleum closes before midday, so you have to get in there quick and be prepared to wait. From the moment my motorcycle driver dropped me off at the wrong end of the mausoleum’s perimeter, I could tell that my patience would be tested. After rounding one corner and seeing that the queue’s length stretched for nearly one kilometer, I nearly considered calling over a motorcycle to take me back to the cool surroundings of the café where I had felt so relaxed, but I decided to press on.

People of all ages were standing in line, waiting for their opportunity to enter the grounds of Uncle Ho; families, businessmen in suits, and a crew of Russian bodyguards. Citizens who were once youths or young parents themselves when Ho Chi Minh delivered speeches in person stood next to children and teenagers who may become the first generation to have their history lessons delivered online and be able to read Ho Chi Minh’s books in electronic format one day.

As I glanced ahead, two kids holding their parents’ hands giggled and smiled when they saw me. The older of the two children asked for my name in English, giggled in their attempts to pronounced “David” properly. They introduced themselves, smiled and asked how much I liked Vietnam. Their Mum and Dad looked at me and grinned proudly that their children could converse in English with a native speaker, which is more than what I could say about my own efforts to talk in Vietnamese. One of the girls told me that they visited ‘Uncle Ho’ every year. The conversation was abruptly halted, however, when three tattooed tourists, two females and a male, walked past us, heading in the opposite direction. The lone guy, singlet thrown across his shoulder, shouted, “Don’t go to see the commie bastard! It’s a f—-ng rip-off!”, belching or swearing every fourth or fifth word. My first impression was that their clothing attire – or rather lack of it, may have contributed to being turned away.

After what seemed like the longest morning possible, I reached the ticket booth where I handed over all of my personal belongings. They would be returned to me after I left the Mausoleum. The family with whom I had recently become acquainted were already ahead of me in the queue because I was slow in getting everything together. With only one more corner to round before reaching the front door of the mausoleum, everybody ceased talking, a sign that we were all near Ho Chi Minh’s body. Two guards brandishing rifles and stone cold looks on their faces stood at the entrance keeping an eye on proceedings. I would learn later in the day that they had thrown out the three foreign individuals for being disrespectful by laughing in the queue, not for their dress standards. Regardless of one’s personal opinion of Ho Chi Minh, it serves as an important reminder to obey the following set of rules:

The process of viewing Ho Chi Minh’s body is a somber affair. Behave in the same manner as if paying respects as a funeral, otherwise you will offend the local population and risk being thrown out of the premises.  Great care should be taken in stepping in unison with the crowd. The room housing Ho Chi Minh’s body is rectangular. From the right-hand side, it is a 60 second walk upon first view of the body and exiting the room, with eight guards keeping their eye on everyone. When I raised my eyes to look at Ho Chi Minh’s body, I caught a glimpse of how other people reacted. Younger Vietnamese took slow deliberate steps while elderly civilians shed tears. Other foreigners were more anxious not to be singled out. I was fascinated to learn that for 3 months of the year, Ho Chi Minh’s body is flown to Moscow where it receives a touch-up to prevent the corpse from going off.

While I cannot describe how I felt when walking around his body, only when I had left the building altogether did I feel more comfortable in looking around me and start making eye contact with other people. Thus I was relieved when the Vietnamese family who I had become briefly acquainted with earlier that morning recognized me, and smiled and waved for me to accompany them. This time, the group was larger, with aunts and uncles now joining in. The father introduced me to everybody and asked about my experience of viewing Ho Chi Minh’s body.

“I cannot remember, I just did not want to break the rules,” I responded. He laughed and suggested that I come back next week for a chance to redeem myself, but in the meantime, was adamant that I enjoy my time with them for the day. “Please join us to see Ho Chi Minh’s house. We will pay for your ticket, you don’t pay foreigner’s price,” he said. With this gesture, I was granted the privilege of entering with my newly adoptive Hanoi family. 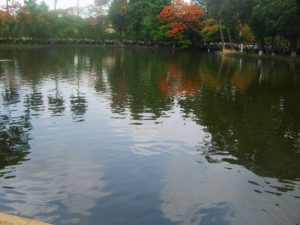 Ho Chi Minh’s presidential house is surrounded by a lake, which along with its picturesque parks and trees, makes the extensive waiting time worth it. As expected, everything can only be viewed from the outside. The house showcases Ho Chi Minh’s collection of cars, his study-room, bedroom, and dining room. Everything had been neatly preserved. I spent my time chatting with the male members of the family as we looked around and made small talk about how great it would be to hire Ho Chi Minh’s car for a day and see the countryside. The older females giggled when I talked, maybe because of the strange sound of my accent.

I began to learn more about the family; the men all worked in the Department of Defense and also had their own catering business servicing western visitors for tour guests, having started out running a soup and noodles stand. It became clear that they were middle-class when the father said that he sent his two children to an international school in Hanoi because it would increase their chances to get into a Western university. “I want them to learn and speak English well,” he added, an implication for me to tutor his children.