The Russian Extreme Right and Its Researchers

Over the last 20 years, the small community of researchers of post-Soviet Russian ultra-nationalism has repeatedly become the target of verbal and non-verbal attacks, by their objects of research — Russian fundamentalists and racists. This is not an unusual phenomenon in the contemporary study of international right-wing extremism. Across the world, researchers of ultra-conservative and neo-fascist groups have been commented on in the most derogative ways by their “clients.” Sometimes, academics and journalists had to defend themselves in the courts. Such conflicts have become part and parcel of doing research and publishing on extremist political groups.

Peculiarities of the Russian lunatic fringe 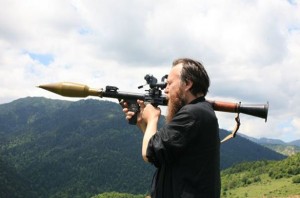 During the last decade, Russian extreme rightists have become especially fierce, in their assaults against researchers of ultra-nationalist politics and civil society actors with an anti-fascist agenda. The extreme right’s behavior has been a reflection of both the generally high aggressiveness of the post-Soviet ultra-nationalist movement and the low development of the rule of law under Vladimir Putin. Numerous researchers, including for instance Galina Kozhevnikova and Aleksandr Verkhovskii, the directors of Moscow’s “Sova” Center, a xenophobia monitoring NGO, have been threatened repeatedly and unequivocally by a variety of radically right-wing groups. In 2004, St. Petersburg ethnologist Nikolai Girenko, like a number of other anti-racist activists before and after, was killed. Girenko had been working as an analyst of the rising Russian neo-Nazi movement, and was obviously shot by one of its members. Many other journalists, scholars, and officials involved in the observation, analysis and containment of right-wing extremist activists in Russia have been scolded, defamed and intimidated, over the years.

Being a researcher of the post-Soviet extreme right, I too have been the object of numerous defamations over the last years. While that was nothing special, more recently, I have become the target of a campaign that is peculiar in terms of its origins and methods. On September 29th, 2009, the Russian news agency Beta-Press.ru reported that I had been arrested the day before in Ukraine in connection with a pedophilia case (in fact, I was in Germany at that time). Beta-Press.ru claimed that I was arrested because, in 2007, I had allegedly attempted to rape a 13-year old girl. Beta-Press.ru also reported that BBC and Associated Press had allegedly found out that, in Germany, I am under scrutiny for child pornography trading. Supposedly, I was and am hiding from both Ukrainian and German law enforcement agencies. Several other Russian patriotic websites, including “Ruska Pravda” (Russian Truth) and “Malorossiia” (Little Russia), have since taken up these allegations and repeated them as well as related stories, a number of times. Every over month, a new report on my various “pedophilic” dealings as well as hiding in various places across Europe appears in the Russian internet. Thus my name was mentioned in connection with the infamous Crimea pedophiles scandal — a particularly filthy part of the generally dirty 2009-2010 presidential elections campaign in Ukraine. By now, “pedofil+Umland,” in Cyrillic letters, produces dozens of hits on the Internet.

There is indeed a link between the website Beta-Press.ru, where the campaign started, and me. According to information provided in 2009 and, in the meantime, changed, by the software developer Robtex.com, the site Beta-Press.ru points to the same IP address as the sites Dugin.ru, Vehi.tv and Eurasia.su. According to current information from Robtex.com, “Evrazia.org shares both name servers and mail servers with [the domain Beta-Press.ru].” All of these websites, including Beta-Press.ru and Evrazia.org, are closely linked to Aleksandr Dugin, leader of the International Eurasian Movement, ideologue of the Eurasian Youth Union administering the “Malorossiia” site, and host of the TV show “Vekhi” (Landmarks) transmitted by the Russian Orthodox cabel channel “Spas” (Savior). The biography, ideology and activities of Dugin were the subject of my second, 2007 Cambridge PhD called “Post-Soviet ‘Uncivil Society’ and the Rise of Aleksandr Dugin: A Case Study of the Extraparliamentary Radical Right in Contemporary Russia.” Out of this dissertation project grew a number of academic and journalistic articles in English, German, Russian and Ukrainian published in several academic journals as well as numerous newspapers and websites. My papers and columns analyzed Dugin’s political activities and writings of the 1980s-2010s. Among others, they pointed out that Dugin has repeatedly and openly expressed his closeness to fascism, and even to some representatives of the Nazi movement including SS-Obergruppenführer Reinhard Tristan Heydrich — the main initial organizer of the Holocaust.

Apparently, Dugin and his entourage noticed and did not like my publications. Dugin’s “neo-Eurasians” and other Russian ultra-nationalists started writing about me, calling me a US agent, Russophobe, Orange provocateur, liberal racist, rootless cosmopolitan and various other things. Dugin’s main website Evrazia.org wrote in March 2008 that, allegedly, I “was dismissed from Stanford, Harvard and Oxford [where I indeed once studied or/and held PostDocs – A.U.] because of homosexual harassment of colleagues.” The “neo-Eurasians” most recent strategy has been to spread – via Beta-Press.ru and some other outlets close, but not immediately recognizable as related to the “neo-Eurasians”, as well the through so-called WWW “trolling” – the slander that I am a pedophile and child pornography trader. In an April 2010 interview for the East Ukrainian website “Donetskii informatsionnyi resurs” (Donetsk Information Ressource), Dugin himself commented on the “pedophile Umland” and stated: “Andreas Umland, I would like to underline, spit most of all with hatred on the Russian-Ukrainian relations. Earlier he worked towards a separation of the Baltics from Russia, and was engaged in the rehabilitation of Nazi criminals in Ukraine. He put forward the most unbelievable lies and libels against all Russian patriots. That person was later involved in pedophile scandals in [the Crimean child holiday resort] Artek – this information is absolutely open and accessible to all.”

This could be dismissed as the ramblings of a lunatic maniac who should not be granted too much attention. However, Dugin is not a marginal figure. In spite of holding academic degrees from obscure Russian provincial institutions, he recently became a Professor at Russia’s most prestigious higher education institution, the Moscow State University named after Lomonosov, where he currently holds the Chair of International Sociology and is the Director of the Sociology Faculty’s Center for Conservative Studies. Although Dugin has, because of his affection to fascism, a tainted reputation since the 1990s, he is a frequent commentator in Moscow’s mass media including the main TV channels ORT and NTV. During a 2005 visit to Washington, DC, Dugin enjoyed private meetings and being photographed with Zbigniew Brzezinski and Francis Fukuyama.

Moreover, Dugin is a well-connected political actor with a number of high-ranking unofficial friends as well as some influential official allies in various Russian power branches and social organizations. The so-called Highest Council of Dugin’s International Eurasian Movement included, during various periods of time, for instance, the Deputy Speaker of the Federation Council Aleksandr Torshin, the former Minister of Culture of the Russian Federation Aleksandr Sokolov, or the Head of the Federation Council’s Foreign Affairs Committee Mikhail Margelov. Among the close political collaborators of Dugin today are Mikhail Leont’ev, an influential journalist working for Russia’s most widely watched First TV channel, Ivan Demidov, an employee of the Russian Presidential Administration as well as former Ideology Department Head of Putin’s “United Russia” party, as well as Talgat Tadzhuddin, the High Mufti of the Central Spiritual Directorate of the Muslims of Russia and of the European Countries of the CIS. More examples of Dugin’s links into Russia’s high society could be listed.

How to protect the reputation (if nothing else)?

The above is also the reason that I have not followed the advice of many colleagues to lay information against Dugin with a Russian court. Given Dugin’s deep links into top echelons of the political elite, the poor state of the rule of law, and lacking division of the branches of power in Russia, the outcome of such a libel trial would be uncertain. It could backfire, if a manipulated court finds some pretext to reject my lawsuit — a fact that would then be cited by the “neo-Eurasian” in support of their allegations against me. In addition, there are now so many restatements of the above allegations on a variety of websites and blogs that I would have to conduct dozens of libel cases simultaneously to get the slur fully deleted from the world-wide web.  The prospects of ever getting my name cleared by a Russian court (not to mention receiving compensation for reputation damage) look dim. Moreover, a well-informed Moscow researcher advised me not to initiate a direct confrontation with Russian ultra-nationalists as that could jeopardize my physical security. It seems that articles like this one (awkward to write and publish) are the only method to counterpose the growing tide of libel, on the Russian internet.

(All websites were accessible, through the listed hyperlinks, on 10 November 2010.)