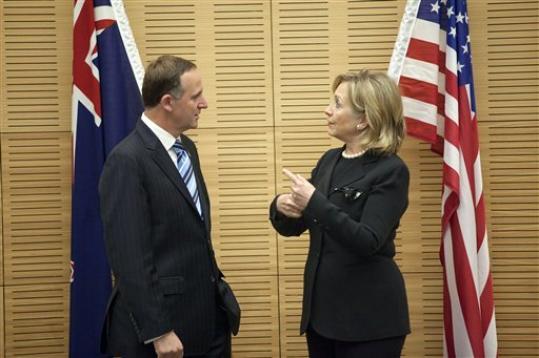 Since 1840, the year of the signing of New Zealand’s “founding document,” the Treaty of Waitangi,[1] New Zealand has seldom pursued an independent foreign policy. Naturally being a British Crown Colony, New Zealand followed British interests (as well as interests that were not so “British” but nonetheless undertaken in the name of the Empire[2]) across the world, including participation in the nefarious wars against the Afrikaners for the sake of Alfred Beit, et al. At the start of World War II, Prime Minister Joseph Savage (a conscientious objector during World War I) asserted, “New Zealand goes where Britain goes.”[3] New Zealand passed the Statute of Westminster Adoption Act in 1947, affirming New Zealand’s status as a self-governing Dominion within the “British Commonwealth.” The residual powers of the British Parliament were not removed until the Constitution Act of 1986. 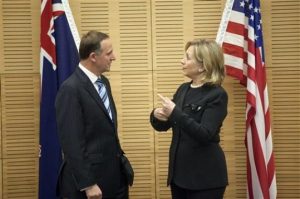 The British identity, for better or worse, provided an anchorage; constitutional, linguistic, legal and cultural foundations — a unifying factor among New Zealand’s two primary ethnic groups, the Maori and those of British descent, in order to shape “one people” according to the Treaty of Waitangi, regardless of how that is now interpreted differently by dubious interests.

However, with the conclusion of World War II, the British Empire and Commonwealth were in eclipse, a process that had been accelerated by the war but that had begun well before. All the European colonial empires were in the process of being dismantled, as the USA and the USSR pursued an agenda that happened to coincide with the interests of both: global European decolonization.[4] The final vestige of the British-NZ tie was broken when Britain entered the Common Market. Brian L Crowe, First Secretary of the British Embassy in Washington, was to state in relation to the burden of World War II and the impending joining of Britain with the Common Market that, “… we continued to bear a combination of burdens that were too much for us. The burden of debt was a crushing one. To finance the war we had liquidated most of our very considerable foreign assets…”[5] His view seems to accord with those unorthodox historians and commentators who maintained that the biggest winner of the war would be international finance.[6]

New Zealand as an economy that is based primarily on exports was pushed into the US orbit. The foundation for this relationship had already been established as early as 1952 with the Pacific Security Treaty, between Australia, New Zealand and the US (hence ANZUS), New Zealand and Australia having been fearful of a resurgent Japan. It is notable that the USA insisted that Britain be excluded from the alliance,[7] thereby indicating that the USA was no ally of British world interests, as genuine conservatives sought to expose at the time; a fact little understood by today’s pro-American so-called “conservative” cheer leaders in New Zealand and the other former Dominions and indeed in Britain herself.[8]

As paradoxical as it might seem to many, including this writer, it was the Labour Opposition in the New Zealand Parliament at the time that expressed concern that ANZUS was subverting New Zealand’s relationship with Britain. The Labour Leader of the Opposition, Walter Nash, stated in the House: “There is a keen disappointment and surprise throughout New Zealand that Britain had been exclude from the [ANZUS] meetings.” Prime Minster Holland (of the “conservative” National Party, the significance of which will be apparent later), replied that the question itself was nonsense, that “nothing could weaken the bonds that attach us with Britain.”[9]

S F Newman commented on this news item of the time: “Despite pressure from New Zealand to extend membership to Britain, the point of view of the senior partner in ANZUS, the United States, prevailed.”[10]

A year later, the USA reaffirmed that Britain would not be permitted into the ANZUS alliance. Despite New Zealand Prime Minister Holland’s assurance the year before in regard to New Zealand’s relationship with Britain, in 1953 all three states agreed that “the tripartite Anzus Pacific Pact” would not be broadened … by admitting Britain or any other country.”[11] Sir Winston Churchill expressed regret in the British Parliament that membership of ANZUS would not be extended to Britain;[12] hence it can be seen that New Zealand followed a flagrantly anti-British line by the USA which sought to displace Britain and all other colonial powers, and inaugurate its own post-war era of neo-colonialism.

These events were taking place at a time when 96% of New Zealanders were of British decent, a situation that is today difficult to imagine, but can still be recalled by this writer when a child. Pro-British sentiment was innate and the most conservative sections of New Zealand society were also the most dubious about New Zealand’s relationship with the USA to the detriment of British ties. For example: “The exclusion of Britain from the Anzus Pact was deplored in a motion passed by the Wellington branch of the Royal Society of St. George [which] also decided to ask the Prime Minister why Britain had been excluded, and whether the British Government had been consulted before the Pact was signed.”[13]

This relationship with the USA via ANZUS within the first decade of the end of World War II, shows the place of the National Government in leading the way towards New Zealand’s pro-US orientation. From thereafter, it was no longer a matter of “where Britain goes …” but “where the USA goes…”

The New Zealand military relationship with the USA and ANZUS collapsed in 1984 when the Labour Government adopted a policy of not allowing nuclear powered or armed ships to call at New Zealand ports, and New Zealand’s “nuclear-free status” was formalized and defined in 1987.[14] However, this process had previously been set in motion by Norman Kirk’s Labour Government, which sent two frigates to Mururoa Atoll in 1973 to protest French nuclear testing, accompanied by Cabinet Minister Fraser Colman. Whatever one might think of this action – and this writer is an admirer of France’s own determination to maintain her national sovereignty – it set the basis for the subsequent de facto exclusion of US ships from New Zealand ports. The USA in return stated that it was suspending ANZUS treaty obligations until US nuclear powered ships could be admitted, now describing New Zealand as “a friend, but not an ally.” While subsequent National Governments, including the present, have had no choice, by force of public opinion, but to maintain the “nuclear-free policy,” a new accord has finally returned New Zealand to the US fold.

While New Zealand seemingly pursued from the time of the “nuclear free” position an independent foreign policy, the eagerness of a small state to play a big part on the “world stage” by talking big at world forums and clinging onto the coattails of the United Nations Organization as a part of New Zealand’s a supposed duty as a “good citizen of the world community” has resulted in both Labour and National governments sending troops all over the world often in accordance with US interests, albeit whether done in the name of the UNO or some alliance. Hence, US Administrations have been noting with quiet approval New Zealand’s commitment to pro-US causes which seem to have started under the Clark Labour Government, (Helen Clark being duly rewarded with a high position at the UNO), which has laid the foundation for the current re-formalization of the NZ-US relationship. For example, in 1994 New Zealand sent “the first of three reinforced rifle companies to Bosnia Herzegovina.

After being farewelled in an emotional street parade throughout Palmerston North, a 250-strong rifle company deployed and although it was attached to a British Regiment it took with it an impressive (at the time) assortment of kit – 25 armoured personnel carriers, Unimog trucks, land rovers, field kitchens and containers of equipment.[15]

Whether one calls such a New Zealand military presence “peace keeping, “ “reconstruction,” or whatever, and whether undertaken under the guise of the UNO or some ad hoc alliance of forces, such a military presence is nonetheless still assisting in the maintenance of US globalist adventures, and has been praised as such by the USA. In particular, the presence and role of New Zealand’s elite SAS force in Afghanistan has only recently become publicly understood:

The SAS is on its fourth deployment, which started in September last year and a commitment has been made to maintain about 70 personnel for up to 18 months, in three rotations. The Government intends over time to withdraw the Defence Force’s 140-strong provincial reconstruction team (PRT), which has been in Bamyan province since 2003.[16]

The SAS presence was acknowledged by US Secretary of State Hillary Clinton on her visit to New Zealand this month (November):

“They are very highly regarded,” she told TV New Zealand in an interview. “They work extremely professionally.” “We have a high regard for New Zealand and the troops that you deploy there, of course we would like them to stay as long as you have them stay,” Clinton said. She said she had discussed New Zealand’s military presence in Afghanistan, both the special forces and a 140-strong provincial reconstruction team of troops in Bamiyan, in talks with Prime Minister John Key in the capital of Wellington on Thursday. She would not say if she had asked him to keep the troops in Afghanistan.[17]