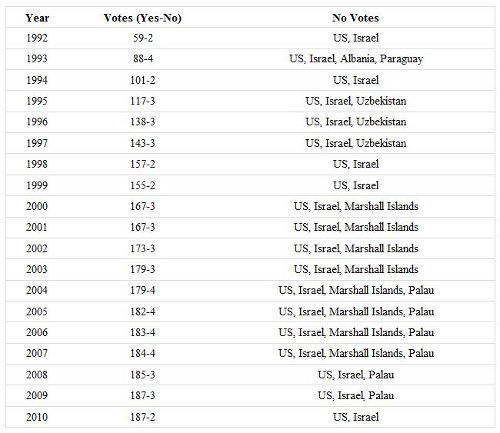 For years American political leaders and media were fond of labeling Cuba an “international pariah”. We don’t hear that any more. Perhaps one reason is the annual vote in the United Nations General Assembly on the resolution which reads: “Necessity of ending the economic, commercial and financial embargo imposed by the United States of America against Cuba”. This is how the vote has gone (not including abstentions), this year being the strongest condemnation yet of Washington’s policy:

Is the United States foreign policy establishment capable of being embarrassed?

Each fall, however, the UN vote is a welcome reminder that the world has not completely lost its senses and that the American empire does not completely control the opinion of other governments.

How it began: On April 6, 1960, Lester D. Mallory, Deputy Assistant Secretary of State for Inter-American Affairs, wrote in an internal memorandum: “The majority of Cubans support Castro … The only foreseeable means of alienating internal support is through disenchantment and disaffection based on economic dissatisfaction and hardship. … every possible means should be undertaken promptly to weaken the economic life of Cuba.” Mallory proposed “a line of action which … makes the greatest inroads in denying money and supplies to Cuba, to decrease monetary and real wages, to bring about hunger, desperation and overthrow of government.”[1] Later that year, the Eisenhower administration instituted the suffocating embargo against its eternally-declared enemy.