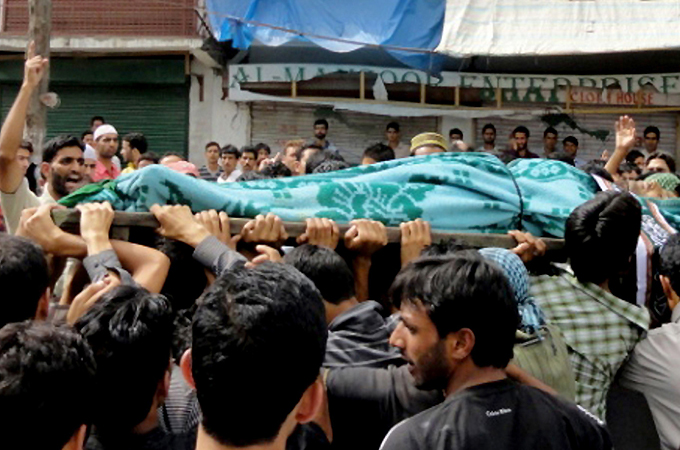 15 Kashmiris were killed in an incident in September when Indian security forces opened fire on demonstrators protesting Indian rule. (AFP)

Obama Should Nudge India Towards Early Resolution of Kashmir Issue

Even though the US has come to exercise considerable political influence over India in recent years, it has shied away from using it to play an active role to help find a solution of the Kashmir dispute that has undermined relations between India and Pakistan ever since the two countries became independent in 1947. The issue continues to bedevil peace in this region.

India increasingly relies on the US for its technology, nuclear collaboration, investment and upgrading of its defence arsenal. The US for its part eyes India as a huge market and a key partner in its future regional geostrategic framework. The US has even being trying to create a role for India in Afghanistan where none exists and which the Indians love to have in order to promote their regional power status and keep Pakistan cornered. This has brought the two countries much closer than ever before. 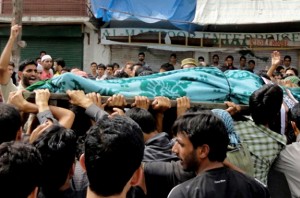 15 Kashmiris were killed in an incident in September when Indian security forces opened fire on demonstrators protesting Indian rule. (AFP)

Candidate Barack Obama was convinced, and rightly so, that the US regional interests would be better served in South Asia if the major cause of conflict – Kashmir, could be removed, thus eliminating the possibility of the two nuclear armed neighbors coming to blows again and encouraging them to devote their energies and resources to development. Upon taking office, President Obama went on to float the idea of naming an American special envoy for Kashmir to explore a US role in facilitating a settlement.

Showing aversion to third party arbitration or mediation, India has consistently refused Pakistan’s proposals in this regard. This time too, India’s noisy protests caused Obama to back off for fear of upsetting the Indians. Ambassador Holbrooke was subsequently confined to overseeing American interests in Afghanistan and Pakistan, or AfPak as the State Department preferred to call it. The pity is that India adamantly refuses to settle the dispute bilaterally either.

India’s Refusal To Reach A Settlement With Pakistan

Pakistan’s offer for a paradigm shift in considering new proposals acceptable to India, Pakistan and the Kashmiri people did not draw a positive response. President Musharraf’s plea for out-of-the-box thinking fell on deaf ears. In the sporadic and inconclusive bilateral dialogue that India has held with Pakistan over many decades, its leadership has been taking one step forward and two steps backwards. As a consequence there remains an impasse.

Although of late a realization seems to be emerging in the senior Indian leadership for the need to explore common ground in search of a solution, weak decision making at the prime-ministerial level has stood in the way. There has been a lack of will, so to say, that is attributable to the very nature of coalition governments that have ruled at the center in recent times. Major coalition parties have had to make substantial concessions to smaller partners who have espoused an extremist anti-Pakistan agenda.

This resulted in a lost opportunity to move towards the resolution of the Kashmir dispute in July 2001. After a joint declaration about the solution of the Kashmir dispute had been worked out between Prime Minister Vajpayee and then Pakistani President Musharraf after secret back-channel talks and both of them were about to sign it on conclusion of  the Agra summit, the whole effort was scuttled at the last moment by the hawks within the Indian prime minister’s camp. In retrospect, perhaps the Indian prime minister must now be regretting his inability to seize that historic moment and bring peace.

Therefore, what is needed in this historical constellation is strong leadership that can decisively act, not shirk from bold and timely decisions and move away from traditional enemy stereotypes and attitude of deep mistrust. It is important that mainstream Indian leadership should refuse to succumb to Hindu extremists who, in spite of being a small minority, have historically held Indo-Pakistan relations hostage to their agenda of hate and animosity. It is time that the will of the people of Indian Occupied Kashmir is given preference over positions taken by extremist quarters, for the future of South Asia is at stake.

It might be of help if India’s friends could play a supportive role. The dispute that has been hanging fire for 63 years cannot be swept under the carpet and will continue to threaten peace. It would be in the interest of all parties to the conflict and the US which has a geo-strategic interest in this region that India moves towards reconciliation.

Why Is Settlement Of Kashmir Dispute In the American Interest?

The upcoming visit of President Obama to India in November presents him an ideal opportunity to pick up the thread of his efforts to help secure a deal on Kashmir. There are cogent reasons why President Obama should renew his interest.

Kashmir has been on his agenda from day one and now the need for a fair solution is increasingly felt by the Congress too because of concerns about human rights violations, the arms race in South Asia, and the fear of nuclear conflict.

“During the presidential campaign, President Obama pledged … that solving the ‘Kashmir crisis’ was one of his ‘critical tasks’. So far, this has been a promise unfulfilled,” said Congressman Dan Burton, a Republican from Indiana who believes that this has direct impact on the global war against terrorism in Afghanistan and Pakistan. He said he believed that “an end to the violence and uncertainty in Kashmir would be widely welcomed in India and Pakistan as well as by our military commanders in Afghanistan.”

That the people of Kashmir want independence from Indian rule has been established by independent polls conducted by international agencies time and again. The people have voiced their will loud and clear and have shown determination to gain independence even in the face of atrocities perpetrated by the state and unbelievable violations of human rights for the last six decades. India unsuccessfully tries to suppress it with a 700,000 strong army and police force brutally garrisoning the valley.

“Grave breaches of humanitarian law continued unabated in Indian-Occupied Kashmir. Civilian casualties which include women, children and people of all ages have reached over 100,000 since January of 1990,” said Dr. Ghulam Nabi Fai, Executive Director, Kashmiri American Council, while lecturing on, “The Humanitarian Crisis in Kashmir” at Wilmington, Delaware.

This unrest is assuming troubling dimensions, getting out of hand and promising to tarnish the image of the world’s ‘biggest democracy’ with the stone-throwing Kashmiri youth now engaging the Indian army and getting killed in the process – a Kashmiri version of the first Palestinian intifada of the late 1980s. With negotiations between Karzai government and the Taliban likely to succeed one way or the other and with the Americans forces getting ready to withdraw, the Jehadis in Afghanistan would most certainly be free to turn their attention to Kashmir in response to calls for help. India would then find this Jehadist Frankenstein impossible to deal with.

This spread of terrorism in Kashmir, and possibly in India, would prove counterproductive for US interests in South Asia. To be able to face up to China in the long term as America’s proxy power, India has to grow economically, overcome pervasive poverty and gain strength militarily. An India at risk of getting involved in another conflict with Pakistan and Jehadis knocking at its door in aid of the Kashmiris is not what the US wants to see.

Besides, by keeping the issue alive, India does not even help Pakistan to isolate and neutralize extremist elements that seek to gain control and destabilize the region through terrorism.

Therefore for the success of the US policy framework that encompasses Afghanistan, Pakistan and India, the Kashmir component is more urgent and critical today than it ever was and hence the need for Obama to nudge India towards a settlement. And this does not amount to mediation or arbitration.

Obama Can Do It

President Obama has the image, the ability and the leverage to do this, and the Indian top leadership would listen to him when he meets it in November. He will have to push the issue firmly without being fearful of annoying the Indians, something that has been holding him back.  They cannot really afford to derail their cooperation with the US.

By working behind the scenes, he could subtly lead New Delhi to complete the unfinished agenda of Manmohan Singh and Musharraf, on which a great deal of home work is already done and which Pakistan should also welcome. If successful, this would open a new chapter in the history of relationship between these old rivals and bring relief to the people of Kashmir, who have suffered long enough.

Kashmiris Have Goodwill For America And The United Nations

It would be worthwhile for President Obama to know that Kashmir happens to be one of the few places in the Muslim world that still has considerable goodwill for the US. Even the Kashmiri hardliners like Syed Ali Shah Geelani have repeatedly appealed to the US to use its influence for resolving the Kashmir issue. Unlike Palestine, where a similar struggle for independence is underway, one does not hear anti-American slogans in Kashmir.

And despite the fact that the UN has failed to deliver on its resolutions on Kashmir or rescue the Kashmiri people from the brutalities of Indian security forces, they still repose confidence in this world body, while the rest of the world dismisses it as only a debating club. This was visible during the 2008 non-violent uprising in Kashmir when people carried banners and placards reading “Ban Ki Moon, Come Soon, Come Soon.”

Will you then, President Obama, please listen to these people, for they are in misery and stand in need of your help? Let not their faith in your leadership be in vain.

Correction appended: A previous version of this article incorrectly stated that Indian Prime Minister Manmohan Singh met with Pakistani President Pervez Musharraf at the Agra summit in 2001. The Indian Prime Minister at the time was Atal Bihari Vajpayee, and it was Vajpayee who met with Musharraf. The error has been corrected above.