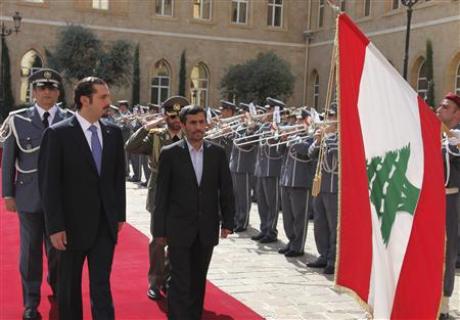 “The only solution to the Palestinian issue is for the invaders (Israelis) of the occupied Palestinian land to leave, and give the Palestinians their rights and return all the Palestinian refugees to their original land.  Iran supports Lebanon’s bitter struggle in confronting Israeli assaults. We demand with all seriousness and insistence the liberation of all occupied land in Lebanon and Syria”. — President Mahmoud Ahmadinejad, Bint Jbeil October 15, 2010

Shatila Camp, Lebanon — In the days since Iran’s president Ahmadinejad completed his visit to Lebanon, and given the continuing lively discussion across the local and international political spectrum evaluating the impact of his historic appearance, one thing appears fairly clear.  US State Department official Jeffrey Feltman, who came to Beirut quick from Saudi Arabia on orders from the White House to “do something!” to offset the Iranian’s unprecedented  reception, may have been a bit wide of  the mark in his evaluation. Feltman repeated this past weekend the March 14 pro-US and Saudi prediction that: “I don’t think Ahmadinejad’s visit will have a lasting effect.  It’s not something extraordinary. Its impact will remain for a couple days and that’s it.” 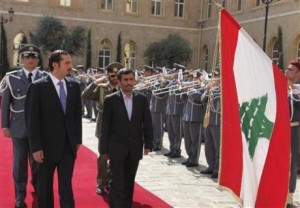 One largely unnoticed achievement of the Iranian President’s visit remains among the Palestinian refugee community in Lebanon.  Close to a quarter million of whom are “living in cages”, to borrow President Carter’s description during his meeting this week with Hamas leader Khaled Mashall in Damascus of how their sisters and brothers are forced to exist in Gaza.

Apart from the Shia community, the largest number of the approximately 750,000 who waited at various events to greet and hear Mahmoud Ahmadinejad, were Palestinian refugees. It is the Lebanese Shia, living in south Lebanon, in the Bekaa and Dahiyeh, who are the primary beneficiaries of the more than one billion dollars in recent reconstruction aid from Iran.

This infusion of funding contributed to Hezbollah’s increase in political power and its ability to achieve public services in its neighborhoods which were previously ignored by the state.  The massive rebuilding projects created pockets of thieving construction economies, mainly in the Hezbollah areas of Ghouberi Municipality, Bir Abed, and Haret Hreik, near the  Palestinian refugee camps of Burj al Barajeneh, Mar Elias, and Shatila. This area saw, since the 2006 war, the rebuilding of 235 multi-unit apartment buildings (80% completed as of October 19, in probably the most efficient building project of its kind in history according to the Organization for Economic Co-operation and Development).

The Iranian largess has quietly benefited thousands of Palestinians in these areas, even though they are forbidden by law to travel to south Lebanon to visit or work and must remain north of the Litani River on penalty of arrest and imprisonment.

During an October 18 morning tour of nearly completed Waad (Promise) residential buildings, bombed into smoldering mountains of rubble during the 2006 war,  this observer interviewed several Palestinian laborers and craftsmen working side by side with equally skilled and hard-working Syrian workers.  What was learned is what Hezbollah officials have revealed, regarding Waad and Jihad al Bina (Struggle Construction Company), both now firmly on US Terrorism lists solely for political reasons. Both organizations have discretely hired, in addition to laborers, hundreds of Palestinian engineers, craftsmen, architects, and “syndicate professionals.” These job offerings go to Palestinian refugees despite being forbidden to them by Lebanese laws enacted by a government that does not even pretend to comply with internationally mandated civil rights for refugees.

Nearly a week now since Ahmadinejad’s departure, the 12 Palestinian camps and two ‘gatherings’, especially among the young people, are still abuzz with often excited discussions of his visit.

This reaction, despite much that is being erroneously reported these days about the current “lost” generation of Palestinians in Lebanon resulting, so it is said, from the devastation that beset this community following the August 1982 departure of the Palestine Liberation Organization. These are legitimate concerns with sociological studies on the subject often presenting shocking indices of social decline, ennui, passivity, and hopelessness. It is well known that Lebanon’s camps have deteriorated and that the quality of life continues to disintegrate. But the young people still appear resolved to follow the spirit of their elders who founded the Palestinian Liberation Organization. Discussions among many in the camps here inevitably turn to questions of “What went wrong?”, “How can we fulfill our parents dreams and take up the mantle of Liberation and Return that we heard from our elders?”, “How can we unite Hamas and Fatah?”, and “How to confront the expanding apartheid regime in Palestine?”

What President Ahmadinejad brought to the under-30 generation in the Palestinian camps is more hope, energy, and self-confidence.

Lacking unified leadership of their own, many Palestinians in Lebanon have been looking to Hezbollah and Iran as a model to revive the Palestinian liberation movement.  The veteran American journalist Jonathan Randel, in Lebanon this week finishing a book on Palestinians in Lebanon, suggests that Hezbollah’s 1985 removal of Israeli occupation forces from one-third of Lebanon’s southern villages was likely one of the factors that gave those under occupation in Palestine confidence to achieve the first intifada, 1987-93.

Iran’s President easily connects with young people and is unquestionably committed to the full refugees’ right of return to their country. In a side meeting with representatives of the refugee camps community and some of their allies, Iran’s President could not have been more emphatic and clear about this.  Included in his counsel to young Palestinians during his visit were the following:

Mohammad, a young Palestinian dentist allowed only to practice inside Shatila Camp due to Lebanon’s discriminatory labor laws explained:  “President Ahmadinejad has been a hero to many of us here in the camps since he first became President of Iran.  Unlike most Arab leaders, he is committed to the liberation of Palestine as if he were himself a Palestinian. He encourages us and speaks like our leaders used to speak before they seem to have given up our national struggle.  If fact, he is more Palestinian than many Palestinians I know. We trust him and feel we have someone to support and protect us. Like Hassan Nassrallah, he has bolstered our confidence to struggle to return to Palestine. Both of these great men are like uncles to the Palestinian generation now becoming adults.”