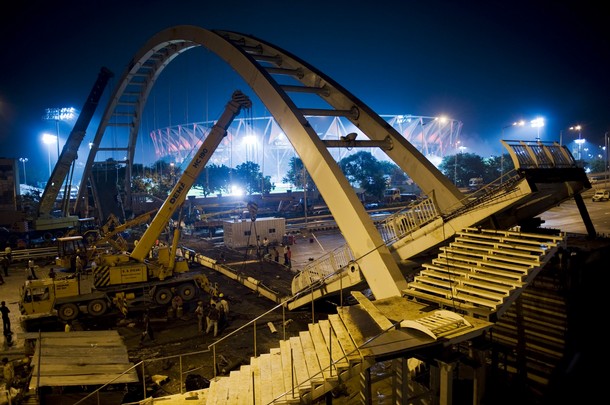 Debris of the collapsed bridge removed near the games arena. (Manpreet Romana/AFP/Getty Images)

Debris of the collapsed bridge removed near the games arena. (Manpreet Romana/AFP/Getty Images)

What: An important footbridge near the Commonwealth Games arena collapsed, injuring at least 19 people. Team heads of different countries have also raised questions over the preparations of the event. The Commonwealth Federation chief Michael Fennell has expressed his ‘shock’ and urged the Indian government as well as the games organisers to take immediate action.

Where: The Commonwealth Games are being held in the Indian capital of New Delhi.

When: The games officially open on 3 October, however, the athletes start arriving in two days time.

Why: The organising committee has been accused of corruption and mismanagement for a long time. Critics say the tender bidding process was not transparent to start with. They also allege construction deadlines were frequently missed, substandard building material was heavily used and poor arrangements for the participants safety and security are in place.

How: Officials from different countries visiting the venues and accommodation say the situation is really grim and unfit for human habitation. Reports also add that only 18 out of 34 athletes village buildings are complete with less than 10 days to go. A shooting incident in the city on Sunday has raised question marks on the security arrangements of the participants.