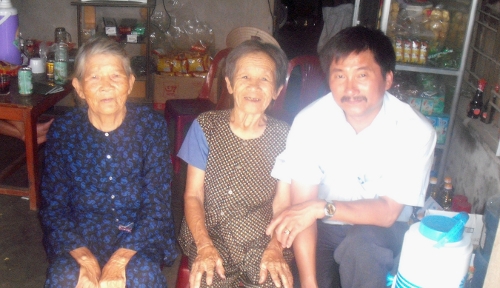 As soon as the American troops moved out, my older sister and I searched for our mother and found her. She was seriously hurt, having been shot in the head and I knew nothing could be done to save her. However, she still had enough energy to give us one last instruction: “Hug your sister Ha, and take her to Grandma’s house. Don’t stay here any longer or they may come back and shoot you.”

These were the last words I heard my mother speak, and whenever I think about that day, it causes me great pain because I loved her very much. It saddens me to accept that among the numerous dead corpses littered the path between the village and my Grandma’s house, one of them was my own mother.

There is a famous panoramic picture of corpses amidst a green rice paddy taken by U.S. Army photographer Ronald Haeberle. But it does not include a shot of the dead women and children behind him. This is because of his position inside the helicopter where the photograph was taken.

When we were far away from the tower, a low-flying helicopter appeared, preparing for landing. I was very scared and hugged my sister. We lay down on the ground out to escape overhead bullets being fired in our direction. When I looked up, I saw helicopters quite clearly and there were a few American soldiers. One unarmed soldier was sitting outside the door, taking photos of the scene. If he had fired bullets, my sister and I would have been hit because the chopper was flying close to the ground. Only when the helicopter disappeared, I embraced my sister, Ha, and headed for Truong Son, in search for the road to Hoi An. We came across several dead bodies of local men on their way to work or the market.

From a distance we heard the sound of the American soldiers’ heavy gunfire. Houses were also being burned, and thick black smoke rose in the sky. I sensed that the helicopters were still patrolling the region. But all I could think about was why the inhabitants of My Son, especially innocent children, were attacked and killed. Many good friends and relatives of My Lai had their roots here, yet the village was now destroyed, and what was once a happy village was now gone. In grieving for the people who once lived here, I repeated “Why were they to blame? Why did you kill her?” over and over again.

Before my sister Ha and I reached our grandmother’s house, we arrived in Gia Hoa to greet my uncle, and asked for drinking water. He saw that we were covered in blood, from hiding in between bloodstained bodies in the ditch before our mother directed us to run away. He cried, a sign of being frightened for our well-being, and then immediately called over a village nurse, Mr. Hung. Our injuries were obvious; I was wounded in the forehead and my sister Ha in the abdomen.

It was in this time we discovered that my older sister, My, survived the slaughter by falling into a ditch and covering herself with dead bodies of people shot in rice fields. She too was covered in blood, but none of us knew the other was still alive. In fact, confusion reigned as to the fate of our mother. Although she was laying in the ditch when I last saw her, another village woman had told My that my mother had in fact escaped and began looking for her other children in the fields.

We listened to My’s story. She shared with us how she wandered the path of other adults taking a wounded child to the village of Truong for emergency treatment at a makeshift clinic. The baby was near death, having lost a lot of blood. Seeing a lost child in the village, a local family invited My to stay with them overnight. This is how Ha and I came into contact with our sole surviving older sister. I was excited to see her, but my first question was about the fate of my other two sisters, Thi Hong (11 years old) and Thi Hue (5 years old). My relayed the news I did not want to hear — they had been shot by American soldiers.

I tried to imagine how my father would react upon hearing all of this. His working commitments in Ty Vinh Tinh Hiep saved his life on that day, but with Quang Ngai province in South Vietnam, not the North, the South Vietnamese government had labelled him “a revolutionary”, meaning that he would be killed on the spot if caught by either American soldiers or members of the Army of the Republic of Vietnam (ARVN).

It turned out that he had been informed of the massacre the day after it occurred and hurriedly set about returning home, but was too late to see his wife and two of his children get buried by his own cadremen. He concentrated on gathering information concerning the day’s events which led to their deaths. A few days later, he braved the drizzly conditions to see his mother (my grandmother), buoyed by the slim prospect of seeing two of my sisters and myself. Our reunion was emotional, and every month he returned to visit us and check on our condition. He dedicated his life to ensuring that his surviving offspring could have a better life and a chance at receiving an education. The task would have been impossible if some of his closest friends did not act as our guardians in his absence.

My grandmother was poor — very poor. Her bamboo house with painted walls in a village on the River Son Hoi did not feel like a permanent home. I used to have fond memories of coming here with my sisters and swimming in the river, but something seemed peculiar now. Maybe my soul had died. Grandmother was old and frail, and she relied on buying and selling fish in the market in nearby Loc. It was her main source of income, but not enough for all of us to live upon. My sisters and I asked Mrs. Bon Thuong, a family friend, to stop working at the markets and assist with making food. Since we experienced regular food shortages, I grew rice and wheat. For what was left of our family, this was the new life — no school, no fun, just struggle.

Every morning, my sisters and I would rise early to commence working on the farm and came back late. There were days when we had no food. Our skin was black and broken from toiling in the sun, and we were thin. I wore a torn hat and rags for clothing. My meager possessions included a pick-axe and a discarded Korean-made bag, which I used to hunt and gather food and anything else deemed edible. My aunts and other locals scavenged for rice, wheat, corn and fluorescent tubes. Any payment came in the form of Oi, a Vietnamese fruit, and some corn.

When I worked in the fields, my little sister Ha accompanied me. She was undernourished and cried a lot, for she missed breast milk. My grandmother improvised by getting the neighborhood children to find somebody who could provide some breast milk in the village. We struggled to survive and were avoiding starvation, but once again tragedy struck our family.

On December 19, 1969, we were informed that lines of communication with our father had been cut off because the country needed him. All I knew at that stage was that he had “been sacrificed for our nation.” I did not know what to think or do. His financial and emotional support, no matter how infrequent, is what kept our household going. The one message I recall him telling me is to always listen to my grandmother’s teachings, for she educated us in times when we had no money to attend school.

This changed in 1970, for I was accepted to attend my local school. What a bittersweet moment for me — my dream had been achieved, but at a cost. How I longed for my parents to see me attend class, even though our hunger pains became inexcruciable. The worst times occurred when we literally starved because there was no rice to be found. Eventually, we resorted to stealing wheat bulbs, a kind of sweet potato, from the garden of a local resident, Mrs. Ran.