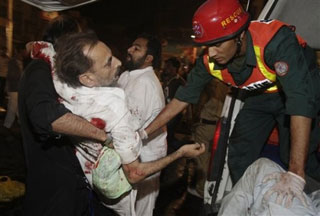 What: Two suicide bombers blew themselves up amidst a procession of thousands of Shia faithful. At least 25 people died in the blasts and 170 others were injured. Reports said 35 people sustained critical injuries.

Where: The attacks took place near a Shia mosque in the eastern Pakistani city of Lahore.

When: The fedayeen struck the holy procession just before sunset on Wednesday, September 1.

Why: Analysts and government officials blame elements allied to the Pakistani Taliban for inciting sectarian violence by attacking Shia worshippers and mosques with suicide bombers. Sunni extremists term Shias as heretics and are waging a war against them.

How: Lashkar-e-Jhangvi (Army of Jhangvi, an anti-Shia cleric) is said to have claimed responsibility for the brazen attack. Intelligence agencies believe many of the suicide bombers are trained in the lawless region of Waziristan, where Pakistani Taliban are in control. Suicide bombing is the weapon of choice of the sectarian groups, exploiting the weaknesses of intelligence and security agencies controlled by the Pakistani government.