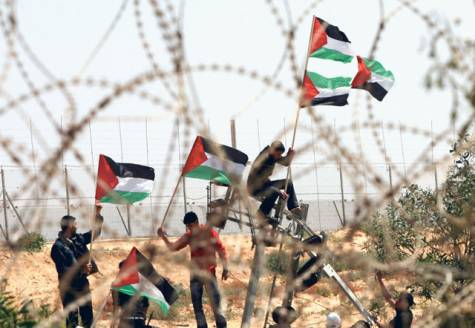 says that anti-Israeli militants operate from the border areas in question, planting explosive devices, firing at Israeli military vehicles and shooting rockets and mortar rounds at civilians. But it argues that Israel has an obligation under international law to protect civilians and civilian structures.

Bronner devotes the first part of his article to noting the impact on a Palestinian family, whose “trees and wells were bulldozed”, noting “destroyed houses” surrounding the family’s “desolate fields”. He notes that, according to the report, 12 percent of the population “have lost livelihoods or have otherwise been severely affected by Israeli security policies along the border, both land and sea, in recent years”, and that “the restricted land comprises 17 percent of Gaza’s total land mass and 35 percent of its agricultural land”, but this is about the extent of his discussion with regard to the content of the report. Most of the rest of the article is dedicated to offering the Israeli point of view and response to the release of the report:

Lt. Col. Avital Leibovich, a spokeswoman for the Israeli military, said that Hamas, the Islamist group that has ruled in Gaza for the past few years, knowingly endangers the civilians living near the border by sending militants there. “What is foremost in our minds is protection of our civilians who live within range of the border,” she said by telephone when asked about the new study. “If your choice is to operate terror, you have to bear the consequences.”

The Times article thus affords equal weight to the Israeli assertion that its activities in and policies towards the Gaza Strip are necessary measures of self-defense against Palestinian aggression and terrorism.

Where the U.N. report discusses the role of Palestinian militants, however, it offers a noticeably different characterization from the one presented by Bronner (emphasis added):

The [Israeli unilaterally declared] restricted areas [in Gaza] are regularly used by Palestinian armed factions for carrying out various military activities against Israeli targets, including against Israeli military vehicles patrolling the fence or carrying out leveling operations [i.e. destruction of Palestinian property] inside Gaza; the planting of explosives on the routes used by the army during incursions; and the firing of mortars and rockets towards Israel and the border.

In other words, indiscriminate rocket attacks excepted, militant operations in the “restricted areas” are primarily defensive and directed at military targets. On the Israeli side, all casualties have been soldiers, while on the Palestinian side, of the 170 or so casualties, 34 percent of those killed and 82 percent of those injured have been civilians (22 civilian deaths and 146 civilian injuries).

These casualties have resulted from Israeli attacks across the Green Line (the 1949 armistice line), with soldiers firing indiscriminately at Gazans who are frequently guilty of nothing more than attempting to reach their own land.

“The civilian population affected by access restrictions imposed by the Israeli military suffers from a systematic lack of respect for their basic rights, as enshrined in international humanitarian and human rights law”, the report notes. It also observes that “It is absolutely prohibited to target civilians,” under international law, “regardless of the circumstances”, and that “Israel, as the occupying power,” as well as Hamas, “are obliged to respect the human rights of people living in the Gaza Strip, as defined in the various human rights treaties and in accordance with customary international law.”

Apart from casualties of Israeli violence against Palestinians, “The Israeli military-enforced regime of access restrictions has had a negative effect on the livelihoods of the affected population. Increased rates of poverty and food insecurity, as well as the adoption of negative coping mechanisms…, are some of the ways in which the deterioration to livelihood is reflected.” Israel has destroyed 305 water wells, 197 chicken farms, 377 sheep farms, 3 mosques, 3 schools, and 6 factories. It has “totally destroyed” 996 homes and “partially destroyed” 371 others. Israel prevents farmers from reaching agricultural land, and destroys orchards and greenhouses. The immediate cost of this destruction of property to the already impoverished Palestinians of Gaza is estimated at $275 million. An additional cost from the loss of “potential agricultural output and corresponding income” is estimated at over $50 million annually.

Israel implements a similar policy at sea, restricting fishermen’s access to their own waters and firing upon those who stray too far away from shore in search of a catch.

According to Bronner’s formula, it is not a fact that Israel is prohibited under international law from engaging in attacks on and collective punishment of civilians, but merely an argument – as though this were somehow debatable.

And therein lies the fallacy of this kind of “objective” journalism.