Bourj el-Barajneh: Searching for Meaning in a Refugee Camp 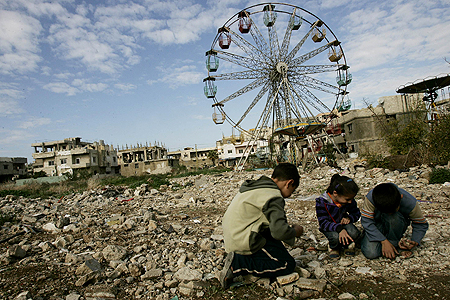 Palestinian children in the area of the Shatila refugee camp in Beirut, Lebanon (AFP)

Beirut, Lebanon — Two young girls stood, as if frozen, staring below them at an ever vibrant Beirut. Their balcony, like the rest of their house and most of their refugee camp was of an indistinct color. It was dirty, as were their clothes. They, on the other hand, looked beautiful and bright, although their future didn’t.

Here in Bourj el-Barajneh, one of a dozen Palestinian refugee camps in Lebanon, time seems to have stood still for years. Generation after generation, children grow up in the same desperate reality, punished for crimes they did not commit, injured by a history not of their making. They stand on dirty balconies, cracked beyond repair, watching Beirut and the world go by. 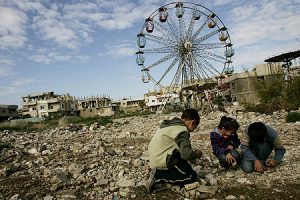 Palestinian children in the area of the Shatila refugee camp in Beirut, Lebanon (AFP)

The city is abuzz with life, politics, rumors, anticipation and intrigue. It remains perpetually divided between many worlds and contradictions, in a way that seems almost impossible to reconcile or bridge.

Bourj el-Barajneh has grown into a ‘municipality’ since its original inception as a ‘temporary’ accommodation for the Palestinian refugees who were expelled from their homes and land in Palestine between 1947 and 1948. The Palestinian physical share of the camp has largely remained the same, although the numbers have significantly grown. Influxes of Shia, Sunni, and more recently Iraqis have moved in and around the vicinity of the camp. Little was put in place to accommodate the natural growth, or to regulate the latter population influxes.

Some self-servingly argued that allowing Palestinian refugees to improve their conditions would disconnect them from their homeland and sense of belonging. Therefore, suffer they must, with little work opportunity, no civil rights, and no cement or building material to repair their pitiful existence.

A state of arrested development has defined this particular refugee camp and Lebanon’s relationship with refugees. Those opposed to the refugee presence fear that incorporating Palestinians into Lebanese society might be the prelude to incorporating them into the country’s political landscape. This might risk further complicating an already messy demography. While Christian sects in Lebanon are the most fearful, others are also anxious.

In 1982, a constant state of siege received a boost when the Israeli army, along with their allies among Christian Phalangists, laid a brutal and deadly siege around Bourj el-Barajneh. Palestinians and Lebanese resisted, but lightly armed refugees could only go so far in withstanding the might of regional superpowers armed by a world superpower. The camp eventually collapsed, as many of its buildings fell. Whatever remained standing was dotted with holes and painful memories.

Another siege followed, and lasted for almost exactly three years, between 1984 and 1987. The perpetrator this time was the Amal militia. This incident also left its own evidence of ailing walls and cracked windows. With rebuilding made illegal by law, and very little by way of funds, the dust of war was the only fresh coat of paint the camp could possible hope for.

But they are many in Lebanon who still want to see improvement – whether slight or significant to the lives of Palestinian refugees, whether in Bourj el-Barajneh or elsewhere. Hezbollah has, till now, guarded various refugee camps against many threats. Palestinians here gratefully acknowledge that without Hezbollah serving as a bulwark against the many looming dangers, the plight of the refugees would have been much worse.

But Hezbollah, a Shia group, can also be hostage to Lebanon’s abhorrent sectarian divisions, demography and political forces. Palestinians here are counting on Hezbollah to step up its support. They need the group to challenge the rejectionist forces in the Lebanese parliament, and demand civil rights for Palestinian refugees. Much is being debated at this time, and there are many backdoor discussions over details, semantics, and more.

Meanwhile, the two Palestinian girls continue to stand on the discolored balcony. They are sisters of about eight and ten years old. They were born after the two terrible sieges and much of the war that tormented their family for generations. But they were here to witness the 2006 war. Their refugee camp is a short distance from the Dahiya, the predominantly Shia neighborhood where Hezbollah is headquartered.

Tough men and women withstood the unimaginable firepower directed at that tiny stretch of land, as in many other parts of Lebanon. Now, most of Dahiya has been rebuilt, with final touches being laid to edifices of concrete that will soon – if another war doesn’t erupt – become hospitals, schools, offices and subsidized residential areas for the poor.

But the same is not true for Bourj el-Barajneh. The camp continues to carry the physical and philological scars of past wars, each generation passing them on to the next. A paradigm shift here is only possible when the balance of power significantly shifts in favor of one party or another.

Aside from admiring its stiff resistance against Israel, Palestinians in Lebanon place so much hope in Hezbollah, believing it will be the party that finally tips the balance of power in favor of justice for the refugees.

Bourj el-Barajneh roughly translates into ‘Tower of Towers’. And in many ways it is. It has stood the test of time and bombs. Its people have surpassed the limits of human endurance and determination in a way that should be scientifically recorded. In some areas it towers over Beirut, from the Haret Hreik direction. Illegal construction and limited space for horizontal expansion forced the refugees to build in some parts in a vertical fashion, creating a Kafkaesque reality, true but surreal.

And the refugees too are teetering between the lines of an almost pseudo-reality. They find themselves held hostage in time and space, in a growing city, a hectically changing world, frozen in time and increasingly lowered expectations.

The two girls continued to stare, clearly without a specific target in mind, while people below them walked on, unhindered by their confusion. I too walked away. For a minute I hoped for a sign, anything that could assure me that there was some meaning behind all this strangeness, all this injustice. I am sure there is, but today, I could find none.