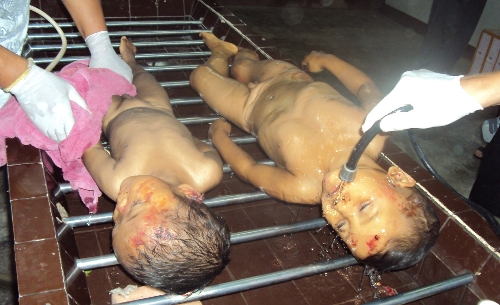 Out of the Frying Pan, But Still Next to the Fire

Burma’s citizens stow away in the trunks of cars or hide their children on overloaded fishing boats, giving all of their worldly possessions to pirates and human traffickers in the often vain hope of reaching a foreign country that would give them refuge until they could be permanently resettled in a land of safety: the US, Canada, Australia, or western Europe.

For many, the desperate flight ends in death. For others, their brief moment of hope and first act of self-determination ends in forced slavery, prostitution, or detention. 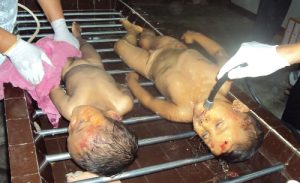 For nearly all of them, it is a one way trip. They will never see their homes or their loved ones again.

Between 40,000 and 50,000 Chin are currently taking refuge in Malaysia. The hardworking volunteers of the Chin Refugee Center, Malaysia (CRC), operating out of a small office with almost no funding, do what they can help them.

The Chin people are one of the larger ethnic minorities in Burma. They come from Chin State, one of seven ethnic states. Chin State borders on India and Bangladesh. The population of Chin State is estimated at less than half a million. 80-90% of the Chin are Christian.

The Burmese junta subjected the Chin people to the same type of torture and abuse that they perpetrated against the Shan, Karen, Arakan, and other minority peoples. Refugees fleeing Burma tell of forced labor, rape, mutilation, execution and arbitrary detainment at the hands of the Burmese Army.

While many Chin chose to flee their home, others formed the Chin National Army to fight back against the Burmese government troops. The CNA based themselves out of Nagaland, in neighboring India, as a way of avoiding the Burmese army.

This bilateral agreement, between the governments of Burma and India was essentially the nail in the coffin of the Chin National Army.

The Chin representative went on to explain that the fight was hopeless anyway. “They cannot fight [the] Myanmar army because it is one of the largest armies in the world.’

Including the Shan, Karen, Wa, and remnants of the Karenni and Chin and other ethnic armies, the total number of insurgents fighting against the Burmese junta would come to less than 100,000. The Burmese army, the tatmadaw, has nearly half a million troops.

“The Chin National Army is almost finished now. They also have their own families and had to go home to take care of their farms,” explained the Chin representative.

In Malaysia, the UNHCR is often the only hope that refugees have. If they can get official recognition as refugees, signified by the issuance of a UNHCR card, there is a chance that they can be resettled in a third country.

On a recent visit to the office, Victor Sang, the coordinator of the Chin Refugee Center, Malaysia told me that about 20% of the Chin refugees had been issued UNHCR cards. But recent attempts to get cards for their families had failed.

Victor showed me a photo of women and children horribly mangled in an auto accident.

“These are the families of refugees,” he said. “They were coming here to join their father. They were chased by Thai police who shot out the tires, and 29 people were injured, 13 of them killed.”

Among the images of twisted metal and shattered lives, the one that stood out the most was that of two babies, Chin infants who never had a chance at life. Their tiny lives were ripped apart before they had even begun.

Cultures and languages differ from place to place, but a mother’s instincts are the same everywhere. No mother would ever risk the lives of her fragile children by taking such a dangerous flight unless the alternative was unspeakable horror.

These two bloody babies encapsulated in a single image the reality of life in Burma under the junta. Things in Burma are so bad that you would risk your children’s lives to keep them out of the hands of the generals.

Apparently, the father was a Chin refugee in Malaysia who, seeing a mere glimmer of hope, had summoned his wife and children to join him. He had already lost everything when he left Burma, and now the junta had robbed him of his last happiness, his family.

“The father had to identify the babies,” said Victor solemnly. He was quiet for a moment, and then the grieving was shattered by the reality of the tens of thousands of people he was responsible for. “The survivors are all in detention in Thailand ….”

As desperate as life is for refugees in Malaysia, a large percentage of them never even get that far.

Chin State borders on India. So, to get to Malaysia, they must first cross Burma, then cross Thailand and walk all the way to Malaysia.

Some Chin flee to neighboring India. The first stop for Chin in India is Miseram, where Victor estimates there are 70,000 refugees.

“In India they have to go all of the way to Deli for their UNHCR card. It is very far and the process is very slow.”

The number of refugees is shocking. In India alone, Victor said, “There are 90,000 refugees waiting to get to Malaysia.”

Getting to Malaysia is a death defying feat.

“In December, 45 Chin died on the sea. The boat was struck by a fishing boat; possibly there was a dispute between smugglers so they rammed the boatload of refugees.”

For those lucky enough to make it to Malaysia, more woes await them.

“Life is very difficult for us here,” explained Victor Sang “Although we are recognized by UNHCR, we are not recognized by the Malaysian government.”

Another CRC administrator told me, “The Malaysian government doesn’t recognize the refugees as refugees. They recognize them as economic migrants.”

Victor said, “We live in fear of arrest. Almost continuously there are raids. The last three weeks on Sundays, especially in the area around the office there have been raids.”

Immigration enforcement raids in Malaysia are often carried out by RELA a sort of volunteer police force which acts more or less with impunity. There have been widespread reports of abuses by RELA, resulting in a wide range of organizations, from the UN down to the Malaysian Bar Association, who have asked the Malaysian government to disband what many see as a deputized band of thugs. Rather than disbanding, the group has now grown to a size rivaling that of the standing Malaysian military.

“We can get raided by RELA or stopped by police, and get arrested or asked for a bribe,” said Victor.

For refugees without a UNCHR card, which is the overwhelming majority, there is the threat of immigration enforcement. For all refugees, even those with the cards, danger comes from illegal employment.

“The UN doesn’t give any money for refugees, only if they are sick in hospital, and the assistance is 300 -500 Ringits per month.”

So the refugees are forced to work illegally in order to eat and pay rent.

“In terms of job, it is difficult, because the government doesn’t allow us to work even if we have the UNHCR card.”

Any refugee who is working is by definition breaking the law. But, with no support from other sources, work is the only means refugees have of feeding themselves and their families.

Apparently, there are some employers who accept refugees to work if they have a UNHCR card. But the salary is low and sometimes they get cheated.

The CRC doesn’t have a dormitory for the refugees, so most are living communally, renting a flat.

“We pay 1,580Ringits per month for a flat and have 40 people living in there. They live according to the village they came from in Burma or according to the dialect they speak. They share food. The one with no job have to eat too, so they share.”

Under current law in Malaysia, refugee children are not allowed to attend public school. So the refugees have organized their own schools. “We have around 40 community run schools for Chin children.”

The picture becomes bleaker and bleaker. There are between 40,000 and 50,000 Chin in Malaysia, who are not permitted to work; neither are their children permitted to go to school. About 8,000 to 10,000 of them have UNHCR cards, which, theoretically means that they are awaiting resettlement to a third country.

“The resettlement process depends on the resettlement countries. If they agree to accept more refugees, UNHCR sends more. But now, most host countries have decreased the number they accept. The total resettled is about 8,000 per year.”

“The US accepts the most, 7,000. Australia 500, Norway and New Zealand will take about 100. So, the resettlement rate is very low. The office is controlled by headquarters in Bangkok. Australia also has an office for refugees in their embassy.”

The rest of the Chin wait, and wait. “How long have they been waiting?” I asked.

“CRC was founded in 2001, but even before that there were refugees… As far as we know no refugee has been given Malay citizenship or residency card.”

So, resettlement is their only option.