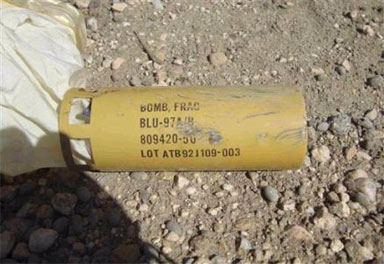 Cluster bombs are in the news again, thanks to a recent report from Amnesty International.

The human rights agency has confirmed that 35 women and children were killed following the latest US attacks on an alleged al-Qaeda hideout in Yemen. Initially, there were attempts to bury the story, and Yemen officially denied that civilians were killed as a result of the December 17 attack on al-Majala in southern Yemen. However, it has been simply impossible to conceal what is now considered the largest loss of life in one single US attack in the country.

If the civilian casualties were indeed a miscalculation on the part of the US military, there should no longer be any doubt about the fact that cluster munitions are far too dangerous a weapon to be utilized in war. And they certainly have no place whatsoever in civilian areas. The human casualties are too large to justify.

Yemen is not alone. Gaza, Lebanon and Afghanistan are also stark examples of the untold loss and suffering caused by cluster bombs. Meanwhile, the unrepentant Israeli army will not consider dropping the use of cluster bombs in civilian areas altogether. Instead it is pondering ways to make them ‘safer’. The Jerusalem Post reported on July 2 that the army “has recently carried out a series of tests with a bomblet that has a specially designed self-destruct mechanism which dramatically reduces the amount of unexploded ordnance.” During the Israeli onslaught in Lebanon in the summer of 2006, Israel fired millions of bomblets, mostly into South Lebanon. Aside from the immediate devastation and causalities, unexploded ordnance continues to victimize Lebanon’s civilians, most of whom are children. Dozens of lives have been lost since the end of this war.

In Gaza, the same terrible scenario was repeated between 2008 and 2009. Unlike Lebanon, however, trapped Palestinians in Gaza had nowhere to go.

Now Israel is anticipating another war with the Lebanese resistance. In preparation for this, an Israeli PR campaign is already underway. It seeks to convince public opinion that Israel is doing its utmost to avoid civilian casualties. “As a result of the collateral damage and international condemnation, and ahead of a potential new conflict with Hizbullah, the IDF has decided to evaluate the M85 bomblet manufactured by the government-owned Israeli Military Industries (IMI),” the Jerusalem Post reported.

Of course, Israel’s friends, especially those who are yet to ratify the Convention on Cluster Munitions, will be pleased by the initial successes of the Israeli army testing. Under pressure to ratify the agreement, these countries are only too eager to offer a ‘safer’ version of current cluster bomb models. This would help not only to maintain the huge profits generated from this morally abhorrent business, it would also hopefully quell growing criticism by civil society and other world governments.

In December 2008, the United States, Russia and China, among others, sent a terrible message to the rest of the world. They refused to take part in the historic signing of the treaty that banned the production and use of cluster bombs. In a world that is plagued by war, military occupation and terrorism, the involvement of the great military powers in signing and ratifying the agreement would have signaled – if only symbolically – the willingness of these countries to spare civilians’ unjustifiable deaths and the lasting scars of war.

Fortunately, the refusal didn’t completely impede an international agreement. The incessant activism of many conscientious individuals and organizations came to fruition on December 3 and 4 in Oslo, Norway, when ninety-three countries signed a treaty banning the weapon.

Unfortunately, albeit unsurprisingly, the US, Russia, China, Israel, India and Pakistan – a group that includes the biggest makers and users of the weapon – neither attended the Ireland negotiations of May 2008, nor showed any interest in signing the agreement in Oslo.

Most countries that have signed the accords are not involved in any active military conflict. They are also not in any way benefiting from the lucrative cluster munition industry.

The treaty was the outcome of intensive campaigning by the Cluster Munition Coalition (CMC), a group of non-governmental organizations. CMC is determined to carry on with its campaigning to bring more signatories to the fold.

But without the involvement of the major producers and active users of the weapon, the Oslo ceremony remained largely symbolic. However, there is nothing symbolic about the pain and bitter losses experienced by the many victims of cluster bombs. According to the group Handicap International, a third of cluster-bomb victims are children. Equally alarming, 98 percent of the weapon’s overall victims are civilians. The group estimates that about 100,000 people have been maimed or killed by cluster bombs around the world since 1965. Unlike conventional weapons, cluster bomblets survive for many years, luring little children with their attractive appearance. Children often mistake the bomblets for candy or toys.

Recently, some encouraging news emerged from the Netherlands. Maxime Verhagen, Minister of Foreign Affairs, urged his country’s House of Representative to ratify the Convention, which bans the production, possessions and use of such munitions. The ban leaves no room for any misguided interpretations and does not care for the Israeli army’s experimentations.

In his speech, Verhagen claimed, “Cluster munitions are unreliable and imprecise, and their use poses a grave danger to the civilian population…Years after a conflict has ended, people – especially children – can fall victim to unexploded submunition from cluster bombs.”

To date, the agreement has been signed by 106 countries and ratified by 36 – and will enter into force on August 1, despite the fact that the big players refuse to take part.

The Netherlands’ push is certainly a step in the right direction. But much more remains to be done. The onus is also on civil societies in countries that are yet to ratify the agreement or sign it in the first place. “All that is necessary for evil to triumph is for good men (and women) to do nothing.” This holds as true in the issue of cluster bombs, as in any other where human rights are violated and ignored.