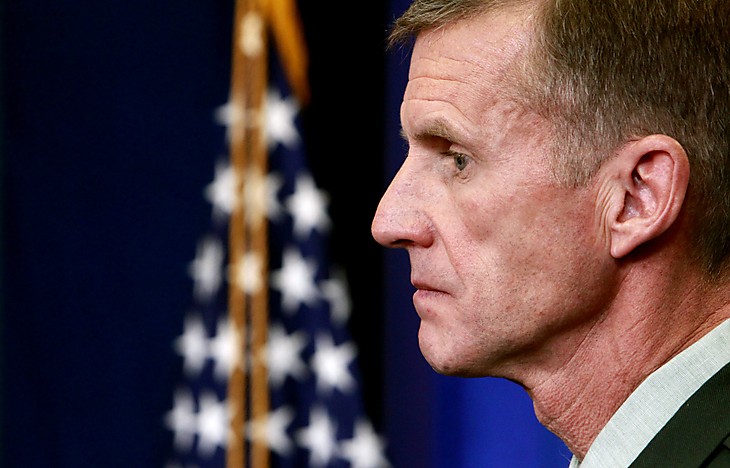 Reasserting civilian authority, the US president sacks General McChrystal - the rising Star of the Pentagon

But soon thereafter, tension grew between the military and the political leadership over the conduct of Afghan war and its control, which intensified as the situation deteriorated. When Obama conceded to the surge his military commanders had asked for, he made it conditional to timelines for troop withdrawal, with an eye on the 2012 elections. The military high command never really accepted these time lines. It argued that counterinsurgency operations could not be realistically limited to a given length of time. The political leadership accused Pentagon of indirect insubordination and the Pentagon responded by saying the administration was focused more on withdrawal than on winning the war. The White House has made it clear again that it remains committed to the July 2011 timetable to start drawing down troops, subject to an in-depth review late this year, meaning that the doors were open for an extension.

Robert Gates must accept responsibility for not being able to prevent this infighting. He has failed to keep the military leadership on the leash and focused on the war under civilian control, instead of engaging in public bickering. It is because of this friction that the American strategy in Afghanistan remains in a flux and the war is heading to a failure.

With General McChrystal episode now behind him, Obama might decide to crack the whip to pull his civil and military teams together and straighten out the chain of command. This may require shuffling some players around. General David Petraeus is undoubtedly the most professional and qualified commander to replace McChrystal, but even the best of generals fail when the civil-military leadership does not work in unison, particularly when the country is at war. And Gen. Petraeus will also have to undertake an in-depth review of the “Iraq strategy” that he gave to McChrystal for a cut and paste application in Afghanistan, which has not worked.

In relieving McChrystal, President Obama ignored President Karzai’s plea to spare him, expressing fears that the war would otherwise be derailed. He also set aside NATO’s request to let McChrystal return to his post.

The fallout of the McChrystal scandal will affect Pakistan too, but the civilian and military leadership chose to remain tightlipped while the drama unfolded. McChrystal visited Pakistan often in an effort to win support for the U.S. strategy in Afghanistan and developed close ties with military commanders, starting with Gen. Ashfaq Kayani, Pakistan’s army chief, with whom he held frequent meetings. Effective cooperation and intelligence-sharing exists between the two sides. He understood that an Afghan solution cannot be achieved without Pakistan’s involvement.

There remains an uncertainty, however, about the extent to which this cordial relationship would be maintained by the new ISAF commander – General Petraeus. Although he is no stranger to the region, has overseen General McChrystal and the war, is fully familiar with the realities on the ground and has remained in close contact with Pakistan’s military commanders, yet Gen. Petraeus remains an unknown entity as a person physically running the operations in the field. Pakistan would also be watching closely the nature of his relationships with groups in Afghanistan that work to destabilize Pakistan and the region, which remains Pakistan’s major concern.

A strong working relationship with Islamabad is and should decisively remain a central part of the U.S. war strategy not only because of the sensitive common borders and the fact that Pashtuns straddle both sides of the border, but also because the events in Afghanistan directly impact Pakistan. That Pakistan is in a position to play an important role in promoting peace goes without saying.