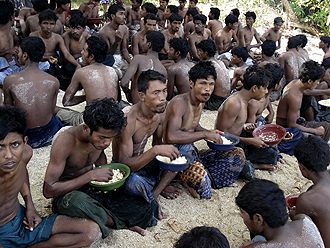 “Many Rohingya die trying to get here,” they explained. And where was here? A country where there was a slight possibility of getting a UNHCR card and living peacefully. But the cards were not easy to get.

“There are Nepali guards at UN now, and they chase away Rohingyas when we go there for help.”

Nearly all of the people we spoke to were undocumented aliens, living at the mercy of the gods.

“Last month, the police raided the community and arrested 100 people,” said Osama, a 22 year old Rohingya man who had been in Malaysia for four years. He proudly showed me his UNHCR card (United Nations High Commission for Refugees). It made him an official refugee and gave him residence and work privileges in Malaysia. He was still unemployed, but at least he couldn’t be arrested.

RELA is the Malay word for “volunteer”. Unfortunately, the Rela corps is a volunteer police force, of more than half a million people, in a country with less than 30 million population. The main focus of Rela corps is to check the documents of foreigners. They are paid a bounty for each undocumented alien they catch. Rela has been the bane of Burmese refugees, particularly non-Muslim refugees who find it more difficult to get a residency permit of any kind. The Rela volunteers act more or less with impunity and have been accused of numerous abuses. Many international bodies have asked the Malaysian government to disband Rela.

The men continued their accounts of atrocities in Burma.

“They burned the mosques,” said one man. Another used the word “broken.”

“If they saw we had long beards, they would catch us and cut them.”

“On Fridays the police blockaded the way. If they saw us trying to go to prayers they would beat us or put us in jail.”

Saya and I had been sitting alone drinking coffee in this market, which everyone knew was home to a lot of dodgy and downright illegal activities, such as weapons and drug smuggling, and murder. Eventually, he asked the waiter if he could speak Malay enough to give me an interview. Surprisingly, the waiter tried, but finally had to give up. He left the restaurant. The Rohingyas are famous for being sea pirates, and I assumed he was on his way to gather a bully-squad of swashbuckling scallywags who would make us walk the plank for asking too many questions. Instead, he returned with a neatly dressed, well-mannered, young man, named Osama, who spoke Malay passably well.

At first, he was slow about answering our questions, not sure what we wanted. The vast majority of the Rohingyas are unemployed, so the two funny journalist men, one of them a white man, became a diversion for the whole neighborhood. A crowd slowly formed around us. At first, it was all men, and I was getting a bit nervous, but Saya, always the professional, continued with his questions.

“Things in my country are so bad,” said Osama, answering Saya’s question. “If the police catch you, they simply kill you. There was a curfew. Muslims weren’t allowed on the streets past 9:00 PM. In my country we were so poor we worked a whole week and had enough food for one day. I only went to school for two years because we didn’t have money.”

Even with the money Osama sends back to Burma now, it is not enough, and his little sister can’t go to school.

By this point, the restaurant was nearly full of people who had come to look at us. When I saw groups of women and children in the back, I breathed a sigh of relief. They probably weren’t going to kill us in front of their families.

I added a bunch of stools to our table and signaled the waiter to get drinks for everyone. The mood began to turn festive, as one by one, the people voiced their feelings about Burma and why they had left. Those that could speak Malay just blurted their stories out.

“If we go back they will arrest us,” said one man.

“A one way trip. We can never go back,” agreed another.

Those who couldn’t speak Malay asked friends to interpret for them.

“I walked thirty days across Thailand and twenty through Malaysia to get here.”

Another man said he used to like to call home once per week, but now his phone was out of credit and he had no work.

I asked the men how they sent money home to Burma. They told me there was a Rohingya bank in the grocery store upstairs. They would pay money to the clerk and twenty minutes later, a bicycle messenger would hand deliver the cash to the family in Burma.

Life had been hard for the Rohingyas in Burma. But it wasn’t easy for them in Malaysia, either. I asked them what they liked best about living in Malaysia and to a man they all agreed, “attending mosque.” They all said they went five times per day, happy now because they could.

They blamed a lot of their suffering in Burma on the Buddhists.

They made comments like, the Buddhists did this to us, the Buddhists did that to us. But I know from my own experience, the Burmese government hates all of the ethnic minorities. They do horrible things to them equally. They persecute Christians and other Buddhists alike. It’s not because of religion, but because of race. In Arakan State, the area where these men come from, there are basically only two types of people, Rohingyas and the government/military people. And the government/military people just happen to be Buddhists. So the only experience these people ever had with Buddhists was of being mistreated and repressed by the Burmese government.

These men are truly victims. Their whole way of life was taken from them. They will never see their families again. At best they will live as second humans in Malaysia forever. They will most likely never become actual Malaysian citizens. None of them had a passport from any country, and most had never had a Burmese ID card.  The only ID they had was their UNHCR card, which only a few of them had.

The Rohingyas are not the only refugees from Burma, who have sought asylum in Malaysia. The Rohingyas told me that Buddhists could get resettled in third countries but Muslims couldn’t. This was a half truth. The Muslims have the distinct advantage that they can remain in Malaysia, legally, and eventually obtain the right to work. And a lucky few will be given citizenship. That option is not open to other ethnic groups from Burma.

When the men said Buddhists got resettled, most of the ethnic minorities in Burma are Buddhist or Christian. Several of these groups are on a UN list which qualifies the attacks against them as genocide, which makes the path to refugee status and then resettlement a lot easier. For example, the Karen, who are mostly Christian, can be re-settled in the US and Canada. Now, there are Karen communities in both of these countries. The Shan, the group I worked with, are Buddhist, but for some reason, they can’t even get recognized by the UN as being an ethnic minority. Which means genocide can’t be proven. Consequently, it is nearly impossible for them to get refugee status and resettlement.

Another issue that plagues the Rohingyas is that they are not cuddly or cute. The Straits of Malacca are the second highest piracy area in the world, and most of the piracy is done by Rohingyas. In southern Thailand, armed Rohingya groups have been encountered who were working as mercenaries in the conflict there. And of course, right now, a lot of countries are not as welcoming to young Muslim men, of foreign origin, between the ages of 16 and 29. In general, refugee status and resettlement is easier for Buddhists or Christians.

The mood had been very somber, so I told Saya to ask the men what they thought of Aung San Suu Kyi.

“Who is that?” asked Saya. He knew a lot about Malaysia, but decidedly little about Burma.

The minute he mentioned her name, the room lit up. The men couldn’t speak quickly enough, singing the praises of “The Lady.”

“They told me she is in jail,” said Saya, confused.

“That’s right. She has been for the last ten years,” I said.

Malaysia, like many countries, had its good and bad points, but it was a relatively free country, where a significant percent of the population was middle class. And of course, it was a country where Muslims could worship in peace.

Yeah, it was terrible. The situation of the Rohingya, and any other ethnic minority from Burma is terrible. Of the men in the room, only a few had a UNHCR cards. None of them had a Malay passport. None had a Burmese passport. And only one or two had a Burmese identity card. There was a small chance that a few of them might go on to be Malay citizens and find some kind of peace in their new life in Malaysia.

The others just sit and wait in limbo.

Catholics believe Limbo is a place between Heaven and Hell. Burma is definitely Hell. Hopefully some of the Rohingyas will find Heaven.