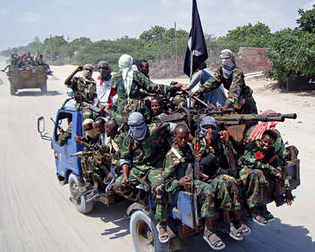 A group of Al-Shabab militants mobilising in Moghadishu, Somalia.

A group of Al-Shabab militants mobilising in Mogadishu.

Who? Al-Qaeda backed Al-Shabab militia is mounting a new offensive.

What? The extreme Islamist movement clashed with the government and its allied forces including African Union peacekeepers and Ahul-Sunnat Wal Jamaat group in a bid to capture the Somali capital. More than 30 people were killed in the violence including six women while at least 70 injured were admitted to already packed hospitals.

Where? The intense clashes took place in the north of Mogadishu near the presidential palace.

When? The fresh bout of bloodshed started on Thursday when government troops attacked Al-Shabab positions in Kaaran district of the war-torn Somali capital but Thursday proved to be the bloodiest when 30 people lost their lives.

Why? Al-Shabab says it is fighting to impose Shariah in the war-torn country in a bid to bring peace and stability. Groups opposed to Al-Shabab’s motives accuse it of making lives miserable of the Somali people by imposing their strict form of Islam. Somali President Sheikh Sharif Ahmad, former leader of the Union of Islamic Courts, was overthrown by a US-backed Ethiopian invasion in December 2006 but was brought back to power last year by the same forces who overthrew him in the first place.

How? Al-Shabab militia is entangled in a fierce power struggle with Hizb-ul-Islam, another Islamist militia as well as Ahlu-Sunnat Wal Jamaat, a moderate Islamist militia that also supports Sufism. Al-Shabab is inspired by al-Qaeda and uses tactics like suicide bombing and road side detonations to overpower its local as well as foreign rivals.