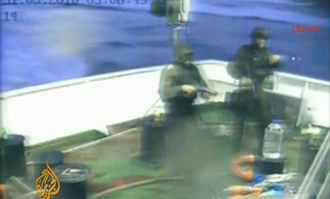 Who? Pro-Palestinian activists traveling on Freedom Flotilla to occupied Gaza assaulted by Israelis.

What? Israeli commandos attacked people on board Mavi Marmama, part of the Gaza Freedom Flotilla, killing 19 civilians and wounding 80 others.

Where? The terror raid took place in international waters, some 65 kilometers off Gaza coast.

When? The aid flotilla came under Israeli commando attack just before dawn on Monday, 31 May.

Why? Israel accused the organizers of Freedom to Gaza Flotilla, an umbrella of international humanitarian aid groups, of having ties with terrorist organizations and delivering bombs and weapons to Hamas in Gaza. The 700 aid workers and activists on board Freedom Flotilla denied the claim. Some 10,000 tons of humanitarian aid was carried on 6 boats with passengers from 50 different countries including Israeli nationals.

How? Israeli special forces first raided the biggest ship ‘Mavi Marmara’ of the Flotilla. They opened fire on hundreds of civilians on board, killing and injuring dozens of people. The ships were then seized and taken to Ashdod port in Israel. The identities of killed and injured people are still unknown.