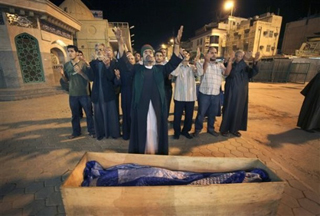 Who? Iraqi civilians killed in a deadly attack.

What? A car bomb claimed lives of at least 22 civilians while wounding more than 50 others.

Where? The attack took place near a crowded cafe just steps from the headquarters of a police rapid-response unit in the town of Khalis, about 80 km north of Baghdad.

When? The deadly incident happened on Friday, 21 May.

Why? No one has claimed responsibility for the attack so far but authorities blame groups affiliated with al-Qaeda for the atrocious attacks on Iraqi civilians. Thousands of civilians have been targeted by insurgent groups and criminal gangs that see them as soft targets.

How? Iraqi civilians have suffered worst terrorism in shape of suicide attacks, car bombs, kidnappings, targeted killings and sectarian riots since U.S. troops invaded the country in 2003. More than a hundred thousand civilians have lost their lives in American military operations as well as insurgent attacks related to al-Qaeda and other rebel groups.