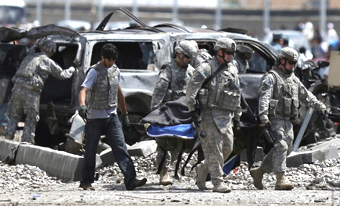 Who? A suspected Taliban suicide bomber rammed his vehicle into an ISAF convoy.

What? The kamikaze-style attacker was driving a van laden with 750kg of explosives killing at least 12 Afghan civilians, 6 U.S. troops and a NATO soldier.

Where? The deadly suicide attack took place in Kabul near the destroyed Dar-ul-Aman, former Afghan royal family palace. The spot is also close to the Afghan parliament and other government and military buildings.

When? The bloody incident happened during the morning rush hour on Tuesday.

Why? Taliban, the Afghan militia resisting US-led occupation forces in the country, has vowed to attack military convoys and installations across the country, especially in Kabul. The guerrilla movement wants all foreign troops out from Afghanistan and a return to Islamic government.

How? The Islamic militia uses a combination of deadly guerrilla tactics, including the use of suicide bombers, road-side bombings, ambushes, kidnappings, and infiltrations to beat the military muscle of US-led foreign occupation forces and their Afghan allies.