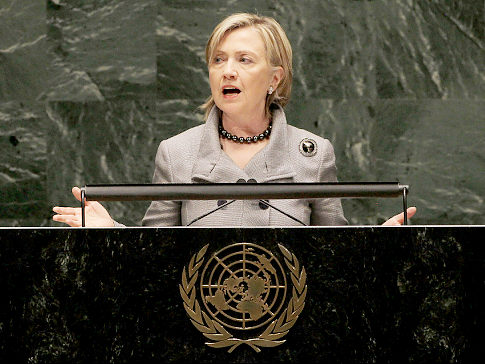 Anti-communism continues to have a detrimental effect upon the intelligence and honesty of Americans.  In April, U.S. Secretary of State Hillary Clinton stated that the Castro brothers “do not want to see an end to the embargo and do not want to see normalization with the United States because they would then lose all the excuses for what hasn’t happened in Cuba in the last 50 years.”[1]

She doesn’t believe that herself. But she thinks the rest of us are stupid enough to swallow it. If she did believe it, she’d advocate normalization of US-Cuban relations just to stick it to the Castros and show them up for the frauds she says they are. In effect the American Secretary of State declared that the central element of U.S. Cuba policy for 50 years has done exactly the opposite of what it was intended to accomplish.  Washington, for all practical purposes, has been a loyal — if unwitting — ally of the Havana regime.

As to “what hasn’t happened in Cuba in the last 50 years” — to add to the mountain of other evidence of the benevolence of Cuban society we now have Save the Children’s “State of the World’s Mothers Report 2010″.  Save the Children, an internationally acclaimed children’s advocate organization, annually ranks the best and worst places to be a mother.  Amongst the 81 “Less Developed Countries” analyzed, Cuba is ranked number one; i.e., the best place to be a mother.  (Amongst the 43 “More Developed Countries” analyzed, the United States is ranked number 28.)[2]

Cuban National Assembly president Ricardo Alarcon responded to Clinton’s statement by saying: “If she really thinks that the blockade benefits the Cuban government — which she wants to undermine — the solution is very simple: that they lift it even for a year to see whether it is in our interest or theirs.”[3]