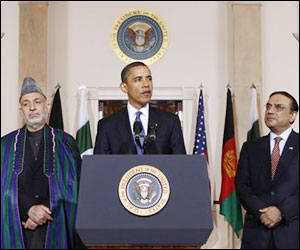 The meeting in Washington DC on nuclear security indicates the concern with the fallout of Bush’s Global War on Terror. It can reasonably have been expected that such a threat should have receded. Instead, the threat exists. This article discusses how the perceived threat can be made to recede further through ending sensibly what Bush began.

Any such consideration should begin by taking into account outcomes unacceptable to those involved. For Americans, leaving Af-Pak to triumphalist Islamists is unthinkable. For NATO countries with populations sceptical of the future in Af-Pak, an increase in the terror threat in Europe due to further degeneration of the situation is avoidable. Pakistan would prefer that the ‘blow back’ it has been suffering from over the past year, due in part to its actions against terror groups in NWFP and FATA, dissipate. India would not like an unreformed Taliban regime taking over power in Kabul. The Taliban for its part would not like to be eliminated. The Al Qaeda would like to outlive the war.

A look at aims remains. American aims as spelt out by Obama are to ‘disrupt, dismantle, and defeat’ al Qaeda. With respect to the Taliban, the aim is to reverse the Taliban’s momentum. The aim of the other NATO states is to exit to avoid increased radicalism. Pakistan aims to create space for the Taliban so as to have a stake in Kabul. India seeks to constrict Pakistan space so as to influence its attitude to terror directed at India. The Taliban aims to return to Kabul. Al Qaeda aims at self-preservation in first place.

In the present discourse, the blame for the disturbed situation is being offloaded on corruption in the Karzai government. The regime is engaged in preventing the Taliban from exposing its current vulnerability through high profile terror attacks. It has sent out feelers that it is open to negotiation with the Taliban. A jirga is impending on this score. It has already evoked interest, with the Haqqani group biting. The ANA is under training for progressive employment in operations.

What are the criteria for evaluating the conundrum? Firstly, is measuring the prospects of success of each of the players against their own yardstick. Second, is on the manner the options impact the Afghan people.

By the first yardstick, all players fall short of their own aims, obviously since none is strong enough to prevail. US-NATO combine is unlikely to be allowed to prevail. The Taliban will not be permitted access to Kabul until it promises to verifiably reinvent itself. Elimination of the al Qaeda is difficult since its course is dependent on what happens in the Middle East rather than in South Asia. Care must be taken to preserve South Asia from expanding instability in any vain attempt to preserve stability in the Middle East. By the second yardstick, all players in their pursuing self-interest are oblivious to the continuing impact of the war on those they are purportedly out to help, the Afghan people.

Clearly, the war needs to end. But not on a note that brings an unreformed Taliban back to power. How can this be done? The answer is to privilege the political prong of strategy.

Keeping the war on in this region, so that America can remain safe is not reasonable eight years since the war began. It would be premature to ask for US vacation of the region. This implies that even while McChrystal goes about his irreversible pursuit of a gaining militarily a position of strength, Americans need to progress the political prong of their strategy with greater rigour. They need to engage the ‘hard core’ Taliban. American military power can remain in location but held in abeyance. NATO needs to depart. However, the EU is welcome to contribute to reconstruction.

Preserving Pakistan from instability and further radicalisation amounts to being an immutable ‘terms of reference’: Pakistan being a nuclear weapons state. Therefore, in exchange for permitting some space, Pakistan requires bringing the Taliban around, but at a price. In return for gaining Taliban access to power, it needs to extract a promise of moderation from the Taliban. This is necessary to preserve the gains from the Bonn process made thus far.

The ‘surge’ was to impress on the Taliban that winning is not possible. The Obama timetable assures them of US exit.  The promise of reconstruction and reintegration is a sweetener. The question is whether the Taliban are strategic beings. Even if the Taliban do not bite, not to attempt engaging them is inexcusable and the risk is worth taking. Al Qaeda has been whittled considerably. The US could now rethink strategy. It has little to do with South Asia. Therefore, South Asia should cease to be the locale of US action.

India needs to keep engaged in Afghanistan in its developmental effort. This soft power is more than adequate to balance any gains Pakistan may seek to make. The Taliban’s feelers towards India need to be capitalised on by India. In return for assistance with reconstruction, the Taliban need to assure India on anti-India activity.

Pursuit of self-interest has not taken any of these players far in any case. It’s time a criteria other than self-interest is used to assess action. How much does each self-confessed supporter do to help preserve the Afghan people from further violence is the criterion. By this yardstick all players fall short.