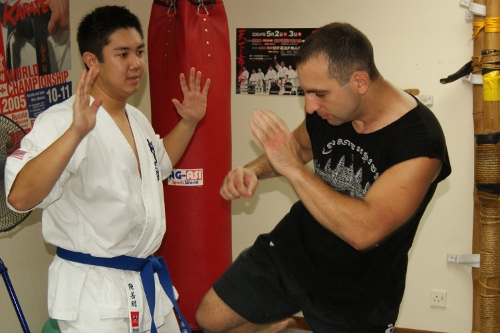 The first time I trained in Malaysia was in August of 2009. At that time my Chinese-Malaysian friend, Sheung Di, arrange for me to train and film at several locations and in several arts in Selangor and Kuala Lumpur. On that first trip, we hit: Boxx Warrior, Kru Jak Othman Muay Thai, Silat Guru Azlan Ghani, and Silat Kalam with Guru Mazlan Man. On my return trip, in March 2010 I revisited each of them and added several new ones.

We began our Malaysian martial arts odyssey at Boxx Warrior, Ampang, which is a pro Muay Thai gym. The owner, Kirsty, a bright and educated Malay woman is a huge fan of Thai boxing. She brought four trainers from Thailand and runs her gym exactly like gyms in Thailand. The Gym opened at 5:00 PM. I went in, warmed up and worked the heavy bags. Next, the trainers, who were all happy to talk to me in Thai, took me on the pads for three rounds of Muay Thai and two of boxing. What I really appreciated about the training was that the trainers made corrections. They watched my form and explained to me where I was off and what I need to improve on. 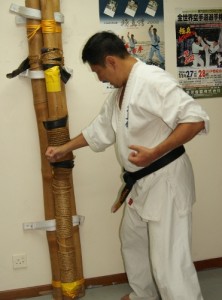 Kirsty told me, “My instructors know if they aren’t good, I will send them back where they came from.”

After pad work, we sparred. Once again, the trainers were excellent sparring partners, making you work for your supper, but they didn’t injure me or any of the other students. Of course, out of frustration, I often took cheap shots.

In addition to taking their fighters to Thailand for competitions, Boxx Warrior, Ampang is involved in promoting professional Muay Thai tournaments in Malaysia. Their leading boxer is Ediey Selendang Kunning (born Moho Zandi Bin Mohd Zawawi) from Kelantan, where all of the great Malay boxers come from. He weighs 63 kg of solid muscle and zero fat and has had 55 fights with only 4 loses. He fights often in Lumpini stadium in Bangkok, and during my second visit to Malaysia Ediey fought and defeated Zidov Dominik, the Croation Muay Thai fighter who was featured on the TV show “The Contender Asia”.

Next, we trained with Kru Jak Othman who owns a chain of Muay Thai schools. Kru Jak is also a recognized, high level Guru of many Silat styles. So, we shot multiple shows with him. Kru Jak and I hit it off extremely well, because he had trained in Kelantan, which is the fighting region of Malaysia. Kelantan, in north Malaysia, borders on Thailand and Muay Thai or Tomoi as the Malays call it, is extremely popular. He grew up training Muay Thai and could also speak Thai. So, when we met, we were able to connect on the basis of both having been fighters and on understanding Thai culture.

Because of my first book, “The Monk from Brooklyn,” my nickname on the internet and in the press is often, Brooklyn Monk. Kru Jak is funny because he insists on calling me Monk. He also tells his students, “When the Monk is around, show him some respect.” Kru Jak also gets a kick out of the fact that I always call him Kru, which is the title for a Muay Thai teacher, and never Guru which is the title for a Silat teacher.

The Muay Thai program at Kru Jak’s place was really interesting. His students were primarily college students or working young people with executive jobs who needed to release stress. “They come to my club and punch it out.” Said Kru Jak. Jak knows that it is an interest in hard-core professional Muay Thai that brings people into the gym, but in his words, “If you put them through a real Muay Thai workout on Monday, you’d be all alone on Tuesday.” He recognizes that Muay Thai training is hard and injuries and pain are inevitable. The only reason Thais, Khmers, and Kelatanese do it is because they need to go fight in a ring to earn money. But middle-class Malaysians aren’t motivated by a need to earn $60 USD in a fight. They want to have fun and get in shape. If the program was as injurious as pro Muay Thai training, students would quit right and left. And Chinese parents would never allow their kids to practice a sport where they might get kicked in the head.

In response to the needs of the students, rather than to the stated needs of the students, Kru Jak developed an innovative training program to suit the modern educated, city dwellers. The program starts with Phase One, where students learn cardio kickboxing. I say cardio kickboxing, but this isn’t Thai Bo. They actually learn real kicks and punches and use the pads and gloves, but the intent at this level is to teach very basic techniques and fitness. At Phase Two, students put on belly protectors and body guards, and they practice hitting each other with set combinations. Eventually, at Phase Four they start sparring and can also fight in professional or amateur Muay Thai competitions.

In addition to Muay Thai, Kru Jak has special evening seminars where he teaches Muay Boran or ancient Tomoi techniques to his students. He also teaches Silat Tomoi. Many of the Silat styles taught in Malaysia involve one or more blades. Kru Jak’s hands move at the speed of light, and with a knife in each hand he absolutely shreds anything he attacks. In Silat Tomoi, the same techniques are added to Muay Thai. So even in unarmed combat, Kru Jak moves in close and shreds his opponent with his hands, elbows and knees.

In the old days, in Kelanatan, this is how professional fights were done. There were no gloves. Fighters wrapped their hands with cords and then they fought, using kicks, punches, knees, elbows, grappling, and Silat style, ripping and tearing.

One of my projects on this second trip to Malaysia is that Kru Jak and I are producing a professional quality DVD on Silat Tomoi which should enjoy a US and Australian release in June of 2010.

Another Silat teacher I trained with on my first trip was Guru Azlan Ghanie who teaches Silat. Melayu, an internal style of Silat which is good for health and could almost be considered a Silat version of Tae Chi. In addition to his special style, he was knowledgeable about a number of Silat styles and weapons. In fact, his office looked like a cutlery factory, with swords, knives and bladed weapons of every description. 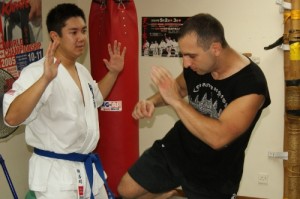 When I trained with him, Guru Azlan asked me to get him various wrestling holds, and in spite of being much smaller than me, he was able to break free. It was a very interesting style and reminded me so much of Chinese styles where old men and women are able to preserve their health but also break free of the grip of much younger assailants.

On that first trip, I also trained with Guru Mazlan Man, who teaches Silat Kalam, a highly practical fighting form of Silat. Silat Kalam included a lot of grappling and locking, as in Hop Kido and practical, no energy throws, like Aikido, but the locks and finishing holds were very unique, different from any other martial art or MMA style I had been exposed to. Guru Mazlan was very religious, a devout Muslim, and only agreed to let me train with him after a lengthy interview process. During that interview, he told me that everything we do in life, all good things, are because of God. “We breathe because of God. We walk because of God. And we can use Silat, because of God.” I liked that phrase and it became the title of our video, “Martial Arts Odyssey Because of God.”

Guru Mazlan Man invited me to return to Malaysia and become his full time student and work as his assistant. And that is what I am doing at the time of this writing. Each day, I train with the Guru in the afternoon, then I train with Kru Jak Othman, learning Muay Thai and Silat Tomoi. Guru Mazlan’s style includes a limited number of movements and only takes a few months to learn, but of course, to truly use the techniques you need to practice intensely and over time. The Guru wants me to be ready to help him teach courses to the Malaysian national police force, beginning in two months time.

One of the very special aspects of my relationship with Guru Mazlan is that he has never agreed to teach his style to a non-Muslim before. I feel very honored. And we both agree that his teaching me sends a signal of inclusion to the different races and religions of Malaysia and to the world. Right now, the government of Malaysia is pushing a slogan of “Satu Malaysia”, or “One Malaysia.” Malaysia is an amazingly unified and stable country, considering that it is home to some many completely different languages, races, and religions. My association with the Guru embodies this spirit of unity.