Coconuts, Coffee and Close Calls on the Mekong Delta 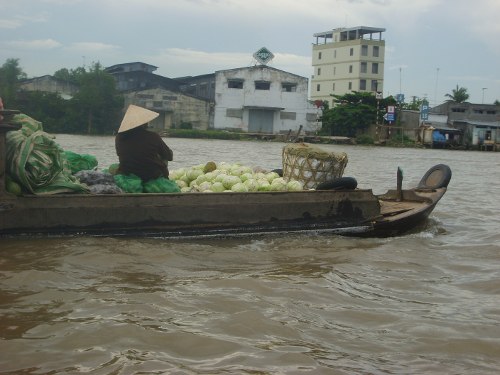 “Hurry up, David. It’s nearly 7 o’clock. Long day today. Very wet outside. Wear your elephant condom!” Before I could open my eyes, Dinh had thrown a transparent pink poncho into my face.

Who needs an alarm clock when your travelling companion is an ex-soldier?

With robotic movements, I rose from my bed and headed straight for the shower, only to find the door locked. By the time Dinh was finished, I had time for a street wash; a pan full of cold water poured quickly over my body. The humidity turned dripping water into sweat beads.

Today would be my last view of downtown Mŷ Tho. Dinh promised me that I would get a taste of the real Vietnam; one that he said too many visitors and tour guides overlooked en route to the floating market in Can Tho, a place where shoppers haggle with boats stocked with numerous fruits and vegetables. 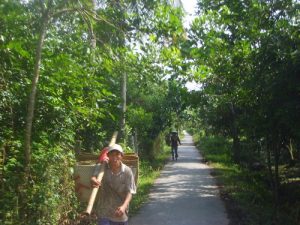 Along the way, we would be greeted by lush, green trees, an appropriate picturesque backdrop. I was excited at the prospect of seeing the hustle and bustle of the boat markets in Can Tho, but failing the presence of a midweek crowd, I am sure that Dinh could have gathered one together out of nowhere.

My motorcycle guide had a unique personality. Having finished school at 17, Dinh enlisted with the South Vietnamese Army (Army of the Republic of Vietnam) to fight in the country’s civil war against the communist supporting North Vietnamese Army (N.V.A.), and their allies, the Viet Cong. He served in the regular military and elite forces for a number of years.

However, when the communists overran Saigon in April 1975, he was taken prisoner and entered a concentration camp, where he was ordered to farm and toil for long hours throughout the day and attend socialist re-education meetings at night. Although he readily admits to being tortured while in detention, he refuses to talk in greater detail, because according to him, it is no longer relevant.

Along with thousands of other motorcyclists, bicyclists and traders, we waited at the docks to board our ferry. Authority figures waiting for the signal to open doors ignored the impatient looks of patrons. I briefly stepped off the motorbike to get some blood circulation into my legs and surveyed the crowd.

Street vendors circulated between customers, selling newspapers, chewing gum and cigarettes. People with physical disabilities such as stunted legs asked commuters for money, but they were ushered away by uniformed officers. Motorcyclists and motorists on their way to the markets stacked as much farm produce such as pigs, chickens and geese in cages and baskets as possible. One lone hen stuck out her neck between the wires in what appeared to be a last gasp hope for freedom. Like her cage mates, she looked dehydrated, and resembled a feather-coated xylophone rather than a bird awaiting a dinner date.

When the gates eventually opened and an orchestra of car and motorcycle horns began tooting, I hopped on the back of Dinh’s motorcycle and headed up the ramp for the first of three 20 minute ferry crossings. We talked about the number of foreigners that he has met and why Vietnam was a popular holiday spot. He spoke good-naturedly about some of the individuals from so many countries he had come across, and referred me to the testimonies that he had received from travellers all over the world.

One group of people he was did not praise, however, were the local traffic police, or as he referred to them, “Number 1”. Dinh would point out every uniformed officer or vehicle in sight, tell me to “watch this” and then as if turning on his indicators, aim his middle finger at them. He did not care if he was spotted or not.  Their idea of community service, Dinh says, is “to collect money from people on the streets to pay for their own lunch.”

When I asked him whether he was frightened at the prospect of being caught, he responded with “No, you are my insurance. They won’t touch me when I am with a foreigner.” 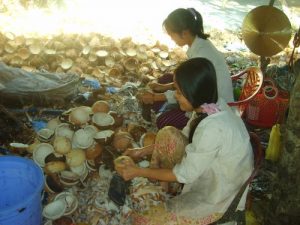 Our first stop was a small coconut produce factory in a shed where twenty-six people peeled, grinded, shelled and chopped coconuts for a living. No part of the coconut, be it either solid or liquid, going to waste. These products, Dinh told me, would be sent to shops throughout the Mekong region. This small operation was also hoping to expand into Saigon. A number of makeshift distillers, knives, chopping boards, and coconut shells were laid out across the floor amongst employees in groups of three or four.

“Everybody who works here gets $USD12 a day for 12-13 hours work. They choose to work these hours,” he added. When somebody offered me a chance to taste a baby coconut, I wolfed it down, momentarily forgetting that the employees here were probably forbidden to eat the same product during working hours. Although both Dinh and the factory owner, who showed me around the premises, provided an assurance that no employee would be reprimanded if they wish to eat a piece of coconut, I was subsequently more conscientious of my surroundings and declined any further offers for free samples.

One employee identifying himself as Trang approached me to demonstrate his diligence. “I am fastest worker in factory,” he said proudly, and in backing up his claim, worked at a frantic pace, shaving the hair off mature coconut shells. His job was to gather enough hair and glue them onto pieces of wood, making household items such as scrubbers and brooms bristles.

He was one of the few employees who took a break from his task to practise his English language skills with me. Other workers greeted me and quickly went back to their tasks. Even though I was able to enter a workplace like this and see how locals made a living here, due to my lack of Vietnamese language skills, I cursed the fact that I could not speak with them.

Taking the time to enter a place like this meant as much to me as viewing the fruit trees lining a 20 kilometre strip along riverbanks afterwards. Everything was sprouting in time for the rainy season.  Dinh pointed out a number of pineapple, orange, mango, papaya, guava and mandarin trees that hung everywhere like decorations. The sight of women in wide-rimmed straw hats wearing traditional brightly coloured silk clothing made everything much more charming. It provided the perfect leeway as we entered the famous the Mekong River’s floating market in Can Tho and hired a boat.

Since trading commences at sunrise, it is possible to hire a boat and partake in the trading frenzy. The floating market is famous for boat ladies inviting patrons to purchase fruit, vegetables, earthenware, and ceramics; yet three decades ago, when civil conflicts engulfed both Vietnam and neighbouring Cambodia, the surrounding area was a guerrilla stronghold. As the river takes you closer to Cambodia, ethnic Khmers make up the majority of the population.

Unfortunately, the trading frenzy that I had anticipated did not materialise because I arrived too late. Traffic flow was restricted to a few boats drifting along the river. Nevertheless, the stream of boats did make for fascinating viewing.

“How do I know who is selling what?” I asked Dinh.

He pointed to the mast. “They show the fruit or vegetable above the flag.” We passed a handful of boats that had completed their day’s trading. A few curious children yelled out “Hello, what’s your name?”, but the further upstream Dinh and I travelled, the quieter our environment became. Soon, it seemed as if we had the whole Mekong Delta to ourselves. 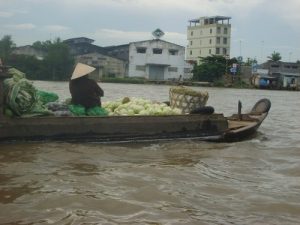 Cruising along the river at a leisurely pace, Dinh indicated that we would stop for some ca phe sua nong (hot filtered Vietnamese coffee with condensed milk) at a café by the riverbank. It happened to be owned by one of his friends. Little did I know that he was planning to play a practical joke upon me.

As we climbed up the rickety ladder, I tried not to think about the possibility of slipping on or breaking the wooden planks and planting a wet kiss on the Mekong River’s banks. The place was run by a middle-aged couple, and also doubled as their residence. Their three daughters, two of whom were married and had children of their own, lived in an outhouse adjoining the entrance.

In the background, several young men were chain smoking, playing cards and brooding over their motorcycles, watching over them like guard dogs. With their gelled, blond-tipped hair, they could have been extras from a Jackie Chan film. One of the guys who looked like the group’s ringleader gave me an ominous glance, a sign that I was invading their turf, so I immediately looked away and focussed on my present company.