The Creed of Objectivity and the New York Times 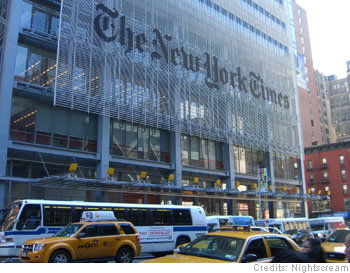 Many have recently questioned just how objective the New York Times’ correspondent in Israel and Palestine, Ethan Bronner, can be when he has a son serving in the Israel Defense Forces, the Israeli army. In an article published March 28, Bronner showed readers there was cause for concern.

Bronner refers to illegal settlement expansion in East Jerusalem simply as “Jerusalem housing.” He quotes Americans and Israelis, many speaking about Palestinians, but not one Palestinian. He includes a quote from Moshe Yaalon, a senior Israeli politician, stating that “the belief of land for peace has failed. We got land in return for terror.” Bronner could have asked a senior Palestinian government minister what he thinks the Palestinians got after over forty years of occupation, in return for recognizing Israel’s right to exist, and after nearly twenty years of negotiations. But he did not. 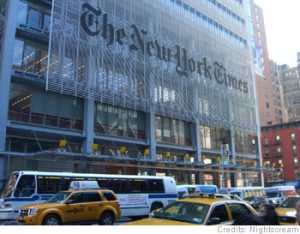 The New York Times sees nothing wrong with its coverage of the Israel-Palestine conflict being shaped by journalists such as Bronner and their stridently pro-Israel columnist, Thomas L. Friedman. Nor do they see a conflict of interest in Bronner having a son in the Israeli army. They believe this will not affect his coverage of its actions in the occupied territories.

“Record the fury of a Palestinian whose land has been taken from him by Israeli settlers—but always refer to Israel’s ‘security needs’ and its ‘war on terror,’” wrote veteran Middle East war correspondent Robert Fisk, author of Pity the Nation: The Abduction of Lebanon and The Great War for Civilization: The Conquest of the Middle East. Fisk was referring to the creed of objectivity in journalism which, he and others like him believe, only dilutes the truth by making journalists timid voyeurs bound by the interests of the corporate media and incapable of writing directly, frankly and fearlessly. This veneer of objectivity only serves to thinly veil the biases always present in the media anyway.

“If Americans are accused of ‘torture’, call it ‘abuse,’” Fisk continues. “If Israel assassinates a Palestinian, call it a ‘targeted killing’. If Armenians lament their Holocaust of 1,500,000 souls in 1915, remind readers that Turkey denies this all too real and fully documented genocide. If Iraq has become a hell on earth for its people, recall how awful Saddam was. If a dictator is on our side, call him a ‘strongman’. If he’s our enemy, call him a tyrant, or part of the ‘axis of evil’. And above all else, use the word ‘terrorist.’ Terror, terror, terror, terror, terror, terror, terror. Seven days a week.”

On Monday, news outlets across the United States reported the arrests of several members of a right-wing militia which planned to kill an unidentified law enforcement officer and then bomb the funeral procession. Though, according to the Department of Homeland Security, right-wing extremist ideology is now the most dangerous domestic terrorism threat in the United States, the mainstream press did not refer to those who were planning the attacks as terrorists.

The New York Times called them “apocalyptic Christian militants,” though they had planned to use improvised explosive devices “based on designs used against American troops by insurgents in Iraq.” When the same newspaper reported on the so-called “underwear bomber”—when Umar Farouk Abdulmutallab attempted to blow up Northwest Airlines Flight 253 on Christmas Day, 2009—they wrote of the “terror suspect,” the “terrorist plot,” “terrorist connections,” the “terrorism incident,” terror, terror, terror, as Fisk would say.

Adam Nossiter wrote in the New York Times that “behind Mr. Abdulmutallab’s journey from gifted student to terrorism suspect”, there “is a struggle within Islam itself, not just in the Middle East or in centers of jihadist ideology like London, but also here in Kaduna, the northern Nigerian city where Mr. Abdulmutallab grew up….” But when it came to Christian terror suspects the word “terror” in the New York Times was conspicuously missing. There was no talk of “terrorist connections” or of a struggle within Christianity itself. Perhaps the paper shares Ann Coulter’s view that “not all Muslims may be terrorists, but all terrorists are Muslims.”

On Monday, I was at the New York Times office in Manhattan and asked someone in a senior position about the editorial board’s stance on Iran. While most of the important editorial pages in the U.S. call for measures of varying severity to be taken against Iran for stubbornly forging ahead with its nuclear program, few dare examine the possible motives behind Iran’s determination; Iran may want nuclear weapons as a deterrent to foreign aggressors.

Iran may want nuclear weapons because it sees the United States occupying countries on its eastern and western boarders; because there was talk in the previous U.S. administration of Iran being next after Iraq in 2003 when things seemed to be going well for Washington; or because Israel, a non-signatory to the Nuclear Non-Proliferation Treaty, introduced nuclear weapons to the region in the first place. The actual use of such a weapon by Iran would be an act of national suicide.

The senior Times employee told me the editorial board’s position was non-proliferation, meaning no weapons. This is a good principle on face value, but why, then, had the paper not written editorials urging Israel to ratify the NPT, to stop producing nuclear weapons, and to open its massive arsenal to international inspections? The person rather bizarrely retorted that Israel’s arsenal was not massive, when, in fact, Israel may have hundreds of nuclear warheads (it is hard to know how many exactly since Israel keeps this a secret). Compared to Iran’s possible development of a few warheads and considering the damage that just one such weapon can do, Israel’s arsenal is, indeed, massive.

Objectivity has become a creed without credence. It is time for newspapers to drop the illusion or to restore the faith of readers in it. This requires honest journalists who operate independently from the power elite instead of seeing themselves as belonging to it, and editorial boards that truly search for new and unconventional perspectives. This will only be achieved when the press begins to apply the same standards—and the same terminology—without discrimination to all those it covers. The New York Times, as one of the world’s preeminent papers and with gifted and honest writers such as Roger Cohen, should do more to set the example.