Activism is Change, Not academic Squabbles and Bickering 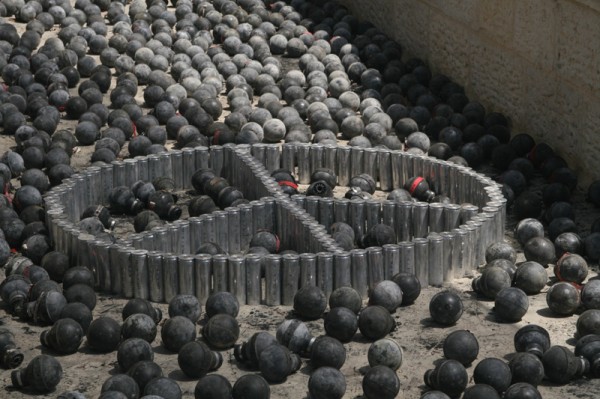 An exhibition of spent tear gas grenades and projectiles in the West Bank village of Bil'in. The exhibition's led to its creator, Abu Rahmah, being indicted by an Israeli military court for 'arms possession'. (Photo: Oren ZivActiveStills)

An activist is a person who feels strongly about a cause and who is also willing to dedicate time and energy towards advancing and realizing this cause.

This might be my own limited interpretation of what activism means. I was born and raised in a Gaza refugee camp where the daily struggles of the community included challenging military occupation while attempting to survive under the harshest of circumstances. Activism then involved civil disobedience, general strikes, confronting armed Israeli soldiers with stones and slingshots. But it also involved much more than that. 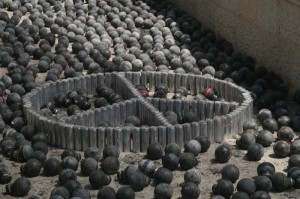 An exhibition of spent tear gas grenades and projectiles in the West Bank village of Bil'in. The exhibition's led to its creator, Abu Rahmah, being indicted by an Israeli military court for 'arms possession'. (Photo: Oren ZivActiveStills)

Activists in my refugee camp, whether they’re identified as Islamist, secularist, socialist or any other name, ensured the community remained unified in the face of adversity. They did not always succeed, but efforts were abound. Activists provided sustainable community support to families with sons and daughters that were killed in clashes or incarcerated in Israeli prisons. They rebuilt people’s homes after they were demolished by Israeli dynamites or bulldozers. Some activists even offered free haircuts to those who couldn’t afford them.

Activism, as I understood it, was largely a unifying, pro-active force that kept the struggle and resistance alive. It was the ingredient that allowed the Palestinian people to maintain their relevance to the conflict, despite the brutality of their enemy and the self-serving nature of their elites.

The elitism in Palestinian society led to a breakdown in unity, culminating in the bloody consequences of the Fatah-Hamas clash. Still, despite all the attempts to undermine it, Gaza remains standing. This cannot be attributed to any factional decision or political diktat, but only to the spirit of its people, a spirit predicated on internal cohesion and a clearly defined purpose.

When I left the refugee camp, my true culture shock was in witnessing the lack of a real sense of community in the places where I lived. These were mostly in Western societies, bustling cities full of nameless people trying to advance their own lot in life, or, in the case of working-class people, to survive. Due to the nature of my work, I also travelled to numerous countries in Middle East, Southeast Asia and parts of Africa. I found it interesting and uplifting to see how societies ravaged by poverty, military occupations, civil war, sanctions, and natural disasters tended to somehow also be the most communal, forward-thinking and effective at problem-solving.

In poorer societies, entire communities can in fact be classified as “activists”. They don’t necessarily have websites or hold regular meetings. Some draw their strength from holy books, ancient philosophies or traditions. Their dialectics are often straightforward rather than academic. A child from Gaza who lost her family in its most recent war on the Strip said through gushing tears that her loss would not weaken her resolve to free her country. Today she is being raised by neighbors and hopes to be a journalist.

While organizing in support of the Palestinian struggle is not an easy task in most Western societies, it is still an essential one. Israel is armed and financed by US and other Western governments. It is they who hold the political key to reining in the Israeli military menace that has tormented Palestinians for generations. The activists in the West who organize in support of the Palestinians also unwittingly contribute to their suffering. Their taxes are used to arm Israel, their votes in elections validate the very parties who shield and defend Israel’s crimes, and their media consumption feeds the very corporations that taint the victim as aggressor. Activism, at least in the Palestine-Israel context, is not a matter of choice in Western societies; it is a moral responsibility.

Over the course of the last 15 years, I have come across some of the world’s most passionate, compassionate and sincere individuals. I can only express good things about that. But I have also become disheartened and disappointed. “Leftist” groups insist on placing Palestine into its anti-imperialist campaign merely as a rally cry, as opposed to a substantively unique issue that needs a substantively unique strategy. Disenchanted “leftists” endlessly quarrel. Some cannot even stand the sight of one another. There are the anti-Zionist Jewish groups, and the anti anti-Zionists Jewish groups. There are those who believe that the pro-Israel Zionist lobby almost exclusively dictates Washington’s policies on the Middle East, and those who believe that the lobby is getting its way simply because their agenda is consistent with Washington’s existing agenda. Different groups have their own meetings, petitions, rallies and merchandise, often competing with or rejecting each other. Take any issue pertinent to pro-Palestinian activism and you will find vastly differing factions that won’t converge or meet.

Of course, there is nothing wrong with diversity of opinion. But when diversity becomes polarizing to this extent, the entire project loses its original value. The public disagreements may stimulate academic discussion, but they can be demoralizing and alienating when it comes to actually bringing change.

I myself strongly believe that the pro-Israel lobby has the upper hand in Washington foreign policy regarding the Middle East, and that only a one state solution can resolve the ongoing crisis and provide a semblance of justice for Palestinians. I also believe an effective boycott and divestment campaign is a must for reining in the belligerent Israeli government. While these are my own views, I still believe it is important to listen to those who disagree with them, partly or fundamentally. After all, our strong beliefs of today are only the outcome of intense discussions and dialogues in the past.

Activism should not be bound by mere personal affiliation, and nor should it unreservedly embrace or accept ideological dogmas. An activist is an ambassador to his cause; yes, he or she must be morally focused, but there should also be a willingness to serve as a unifying force, and to strategize and organize accordingly.

The day our publications, newsletters, websites, conferences and rallies include all sorts of opposing views, without slander and intimidation, will be the day that we can be sure a cohesive community of activists is in the making, a community able to achieve good things. Without this, no campaign will be effective enough to make major policy shifts, in Washington or anywhere else.