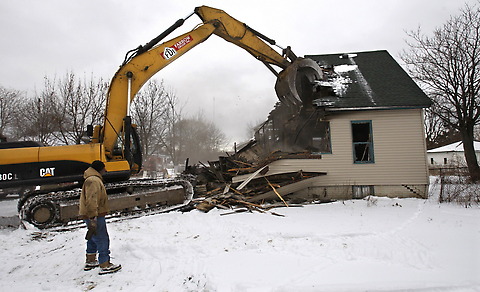 A house in Detroit is demolished (Carlos Osorio/AP)

In the 20th century, Detroit, Michigan, symbolized American industrial might. Today it symbolizes the offshored economy.

Detroit’s population has declined by half. A quarter of the city–35 square miles–is desolate with only a few houses still standing on largely abandoned streets. If the local government can get the money from Washington, urban planners are going to shrink the city and establish rural areas or green zones where neighborhoods used to be. 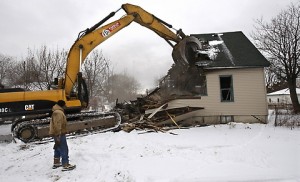 A house in Detroit is demolished (Carlos Osorio/AP)

President Obama and economists provide platitudes about recovery. But how does an economy recover when its economic leaders have spent more than a decade moving high productivity, high value-added middle class jobs offshore along with the Gross Domestic Product associated with them?

The average work week is falling and currently stands at 33.1 hours for non-supervisory workers.

Charles McMillion has pointed out that unit labor costs actually fell during 2009, but that non-labor costs have been rising throughout the decade. The rise in non-labor costs perhaps reflects the decline in the dollar’s foreign exchange value and the increased dependence on imported factors of production.

Economists and policymakers tend to blame auto management and unions for Detroit’s fall. However, American manufacturing has declined across the board. Evergreen Solar recently announced that it is shifting its production of solar fabrication and assembly from Massachusetts to China.

The financial economy which was to replace the industrial economy is nowhere in sight. The U.S. has only 5 banks in the world’s top 50 by size of assets. The largest U.S. bank, J.P. Morgan Chase ranks seventh. Germany has 7 banks in the top 50, and the United Kingdom and France each have 6. Japan and China each have 5 banks in the top 50, and together the small countries of Switzerland and the Netherlands have six with combined assets $1.185 trillion more than the 5 largest U.S. banks.

Moreover, after the derivative fraud perpetrated on the world’s banks by the U.S. investment banks, there is no prospect of any country trusting American financial leadership.

The American economic and political leadership has used its power to serve its own interests at the expense of the American people and their economic prospects. By enriching themselves in the short-run, they have driven the U.S. economy into the ground. The U.S. is on a path to becoming a Third World economy.