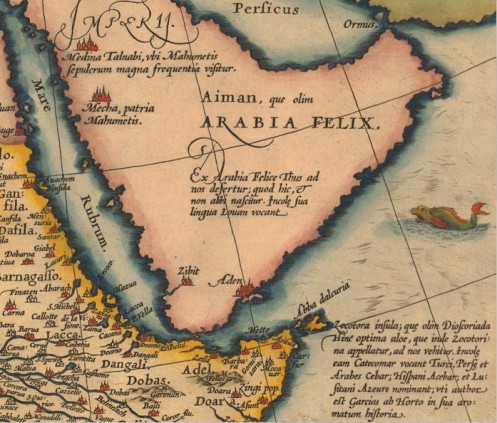 Great Greek geographer Ptolemy described Yemen as Arabia Felix meaning fortunate or happy Arabia due to its fertility, wealth and importance in the known world. The region enjoyed abundant rainfall and was known for its green fields and gardens.

Recent events in Yemen have brought the country into limelight again. While Houthi rebels in the north and northeast of the country have an on-off political agreement with the government in Sanaa, al-Qaeda affiliated groups are flexing their muscles by attacking the authorities across the country. Political forces in southern Yemen are also unhappy with the economic development the region has seen since its union with the north two decades ago and talk of secession is ripe.

Though strategically located at the junction of the world’s most important waterways, the Red Sea and Gulf of Aden, the channel that connects world’s western shipping lines to the east, Yemen has failed to capitalise on its potential and emerge as a regional powerhouse. Instead, the country is at the brink of political mayhem and stands at #18 in the Failed States Index 2009.

This photo story sheds light on Yemen’s ancient as well as recent history and discovers the factors that have hampered the country’s economic and socio-political development and brought it to the brink of disintegration.

Great Greek geographer Ptolemy described Yemen as Arabia Felix meaning fortunate or happy Arabia due to its fertility, wealth and importance in the known world. The region enjoyed abundant rainfall and was known for its green fields and gardens. 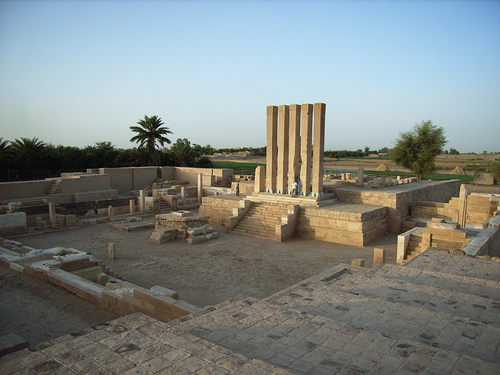 The region gained new heights of wealth and prosperity during the rule of the Sabaens from 8th century BC to circa 270 AD. The kingdom was based in Marib, located near the modern Yemeni capital of Sanaa. The remains of a large temple, considered as the ‘Throne of Queen Sheba’, (pictured) built in 8th century BC survives the test and trials of centuries and is a major tourist attraction. (Photo: woolamai76) 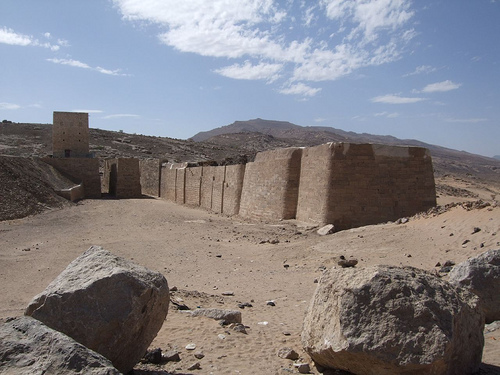 Great Dam of Marib is one of the most ancient engineering wonders of the world. It was built in circa 750 BC and took several hundred years to complete. The Sabaens gathered monsoon rains  and irrigated large stretch of land in the region. (Photo: Execestides)

Dubbed as the “oldest skyscraper city in the world” and “Manhattan of the desert”, Shibam is one of the ancient and sophisticated example of urban planning based on vertical construction. The city was founded in circa 3rd century AD and is now a UNESCO World Heritage Site. (Photo: AFP) 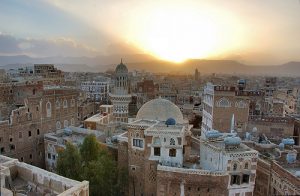 Islam was introduced in Yemen in 630AD. Then Sassanid governor of the region Badhan embraced the religion when a prophesy told by Prophet Muhammad came true. The masses also converted and the region soon became the centre of Islamic learning, architecture and textile industry.  (Photo: Cappellaio Matto) 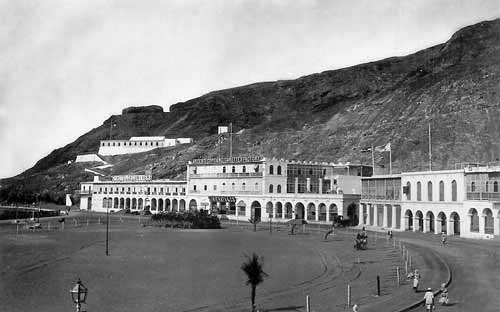 After changing hands with local Yemeni kings as well as Ottomans and Portuguese, the British arrived here in 1838 to take control of the port city of Aden. The British East India Company moved in to take control of the Gulf of Aden waterway and clamp pirate activity in the area. Aden remained under British control until 1967. (Photo:  essamarshed) 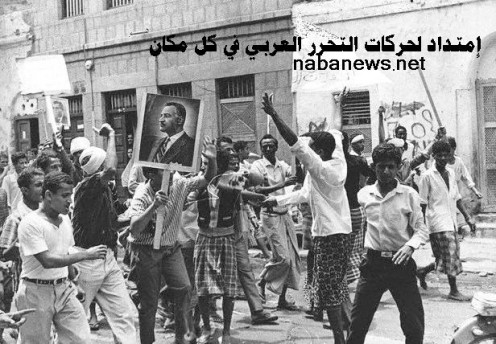 Arab nationalism reached unprecedented heights as a result of Western interference in the Middle Eastern affairs, especially after the Suez Canal debacle in 1956. Rebels in Yemen supported by then Egyptian President Gamal Abdul Nasser (pictured in placard) began guerrilla attacks on British forces stationed in Aden to force their withdrawal from the region. (Photo: MR-Gamal) 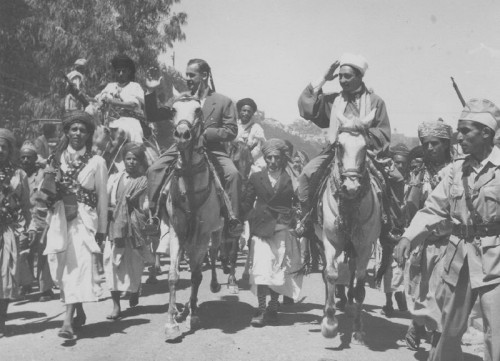 Saudi Arabia and imperial power Britain aided the royalists who gathered under the command of Imam al-Badr (pictured right), a leader of the Zaidi sect of Shia Muslims, to counter the growing influence of republican forces that enjoyed wide-ranging support from the Egyptians. The Northern Yemen civil war raged from 1962-1970 and ended when royalist forces were defeated and Riyadh accepted the republican government in Sanaa. British forces also withdrew from the region in 1967. Thousands of lives were lost in the war and Yemeni economy was completely devastated as a result. (Photo: iAmWatiAm) 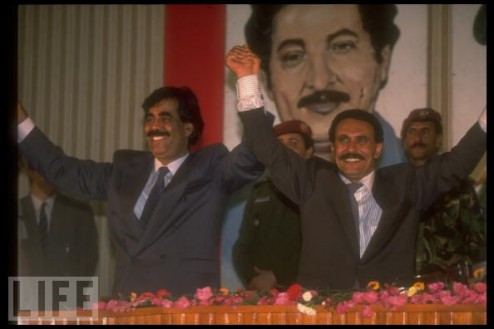 After years of negotiations for unification, the leaders of both South and North Yemen, Ali Salim al-Baidh (left) and Ali Abdullah Salih (right) signed the unification agreement on 22 May, 1990. The country was declared as Republic of Yemen and new elections were held to form a new democratic government. (Photo: Life.com) 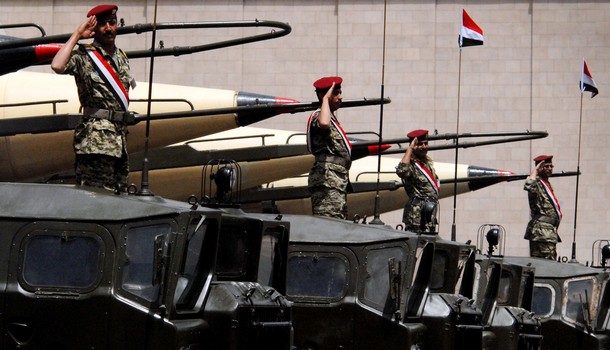 Despite adopting a new constitution and holding free and fair elections in 1993, the political parties could not agree on power sharing which resulted into a full blown civil war in April 1994. Yemeni leaders from the South tried to wrestle but were quickly overpowered by the powerful North Yemeni army. Most of the southern leadership went into exile following the defeat. (Photo: Getty Images) 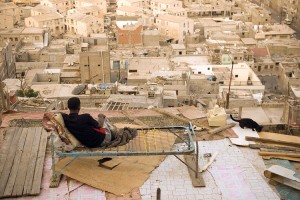 View of a slum in second largest city of Aden. Yemen is one of the poorest countries in Arab world and stands at 151 position out of 177 on the Human Development Index (HDI). More than 60% of the population earns less than $2 a day. Despite receiving billions of dollars of foreign aid, Yemen has shown little signs of progress to bring substantial change in the lives of millions of people across the country. The situation seems to worsen more as half of the population is under the age of 15, according to a survey carried out by the Food and Agriculture Organisation (FAO).  (Photo: Swiatoslaw Wojtkowiak) 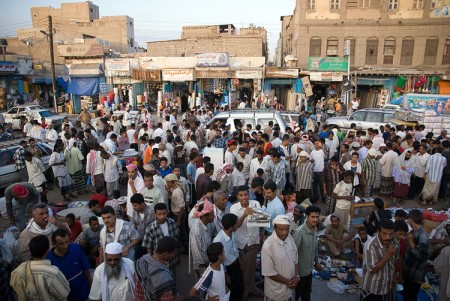 View of a busy marketplace in Aden. Staggering unemployment rate of around 35% hampers serious socio-economic development of the nation. People finishing high school and possessing university degrees are affected the most and according to a government survey published in 2008, 54% of graduates are unemployed/under employed. (Photo: Swiatoslaw Wojtkowiak) 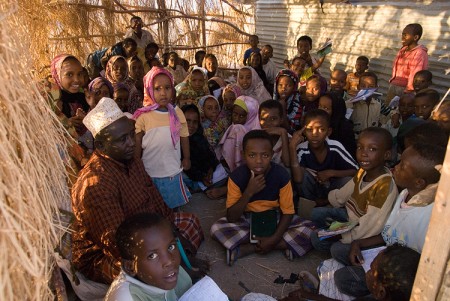 According to a Yemeni government estimate, more than 750,000 African refugees live in Yemen, mostly from neighbouring Somalia. Unlike Gulf states, Yemen accepts refugees from war torn countries with open arms and has ratified the 1951 UN Convention on Refugees. Despite their legal status, the refugees fail to make a decent livelihood due to the poor economic conditions in the country and an already strained labour market. (Photo: Swiatoslaw Wojtkowiak) 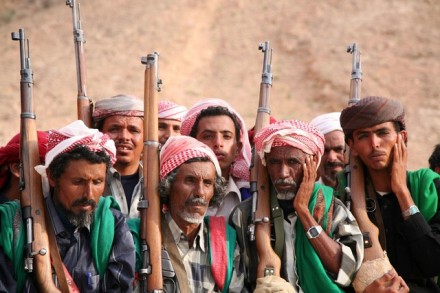 Failed economic policies, incessant foreign interventions and lack of a dynamic civil society has pushed thousands of people into the mouth of violence and strengthened the cause of militancy. Ranks of al-Qaeda have swelled over the years as people seek alternative ways to overthrow the corrupt establishment that runs the nation. Hundreds of people have lost their lives in the past few years in al-Qaeda related uprisings across the country. US-led drone attacks that frequently result in massive civilian casualties have made the situation worse on the ground. (Photo: Reuters) 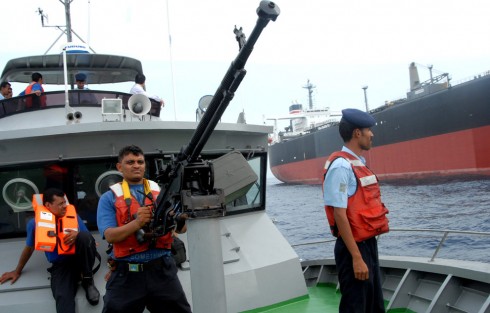 Yemeni coast guards standby next to a damaged Japanese oil tanker in their territorial waters on 22 April 2008. There are reports of Yemenis involved in piracy often assisting their Somali counterparts and providing vital information and know how of the Yemeni waterways.  (Photo: Khaled Fazaa/AFP/Getty Images) 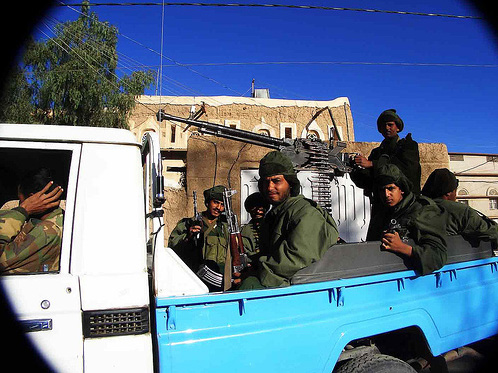 Years of economic deprivation and religious persecution has alienated Yemen’s Zaidis, a sect of Shia Muslims. They form around 40% of the population and are concentrated in the northern and northwestern regions of the country. Yemeni government alleges that Houthis, the militant Zaidi group, receive arms and political support from Iran, a charge denied by both Tehran and the rebels. Hundreds of people have lost their lives since the conflict began in the Sa`dah region in northern Yemen in 2004. A fragile ceasefire that came into effect last month has halted bloodshed but trust deficit between the sides dogs long lasting peace. (Photo: enthogenesis) 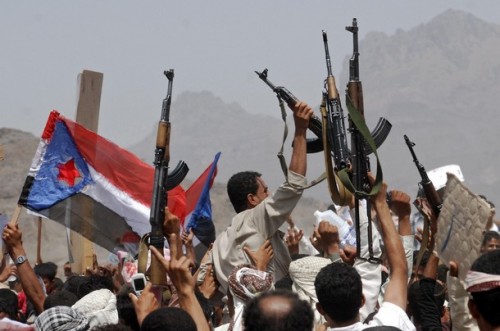 Pro-secession activists hold a rally in southern Yemeni city of Radfan on 8 June, 2008. Little has changed in south Yemen since the unification of both the units in 1990. While Sanaa benefits from an oil money boom, the streets of former South Yemeni capital of Aden are in shambles and southerners complain of inflation and systematic deprivation of their resources. Majority of Yemen’s oil is produced in the south of the country and is a cause of resentment due to unequal sharing of oil wealth. (Photo: Getty Images) 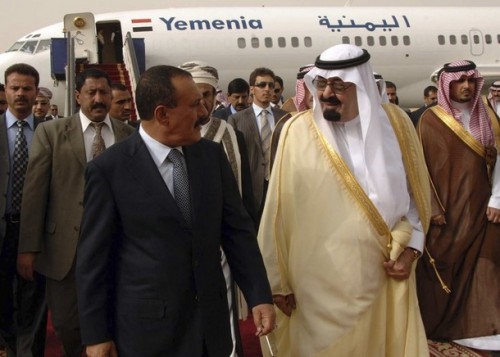 Yemeni President Ali Abdullah Saleh enjoys complete control of the state and has been in power since the last 32 years. Seizing power in a 1978 coup in then North Yemen, he has clung to power thanks to principal backing by Saudi Arabia and the United States of America. He was elected for another seven year term in 2006 in what his critics labelled as a one-sided election. (Photo: Reuters)

Though the only republic in a monarchist Arabian peninsula, Yemen has never seen proper functioning of democratic institutions and has always faced foreign interference that lead to civil strife and collapse of a viable economy. Future outlook for the poorest Middle Eastern democracy remains bleak and fears that the country will become a hotbed of violence pose a serious threat to the vision of a peaceful and progressive Middle East.