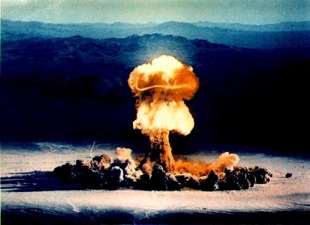 Indian explosion of its nuclear device in 1974 drew only a customary “show of concern” from the Western powers. But Pakistan’s nuclear program, initiated in response to the Indian acquisition of nuclear weapons, evoked immediate and “serious concern” from the same quarters. Ever since, Pakistan has been under immense pressure to scrap its program while the Indians remain uncensored.

That Western attitude was discriminatory can also be seen by the religious color it gave to Pakistan’s bomb by calling it an ‘Islamic bomb’. One has never heard of the Israeli bomb being called a ‘Jewish Bomb’, or the Indian bomb a ‘Hindu Bomb’, or the American and British bomb a ‘Christian Bomb’ or the Soviet bomb a ‘Communist’ (or an ‘Atheist) Bomb’. The West simply used Pakistan’s bomb to make Islam synonymous with aggression and make its nuclear program a legitimate target, knowing full well that it merely served a defensive purpose and was not even remotely associated with Islam. 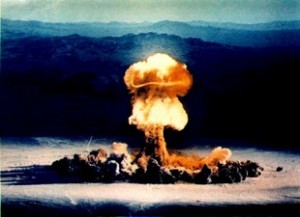 With India going nuclear soon after playing a crucial role in dismembering Pakistan in 1971 and enjoying an overwhelming conventional military superiority over Pakistan in the ratio of 4:1, a resource strapped Pakistan was pushed to the wall. Left with no other choice but to develop a nuclear deterrent to ward off future Indian threats, Prime Minister Zulfiqar Ali Bhutto declared: “Pakistanis will eat grass but make a nuclear bomb”. And sure enough, they did it. Soon, however, both he and the nuclear program were to become non-grata. Amid intense pressure, sanctions and vilification campaign, Henry Kissinger personally delivered to a defiant Bhutto the American threat: “give up your nuclear program or else we will make a horrible example of you’.

And a horrible example was made of Bhutto for his defiance. But he had enabled Pakistan to become the 7th nuclear power in the world. This served Pakistan well. India was kept at bay despite temptations for military adventurism. Although there has never been real peace in South Asia, at least there has been no war since 1971.

Ignoring its security perspective, Pakistan’s Western ‘friends’ refused to admit it to their exclusive nuclear club, though expediency made them ignore its ‘crime’ when it suited their purpose. But driven by identical geo-strategic interests in their respective regions and seeing Pakistan as an obstacle to their designs, Israel and India missed no opportunity to malign or subvert Pakistan’s program.

Due to its defiance of Indian diktat, Pakistan is for India an obstruction in its quest for domination of South Asia and the Indian Ocean region. Israel’s apprehension of Pakistan’s military prowess is rooted in the strength Pakistan indirectly provides to Arab states with whom Israel has remained in a state of conflict. Conscious that several Arab states look up to Pakistan for military support in the event of threat to their security from Israel, it is unsettling for Israel to see a nuclear armed Pakistan.

Israel can also not overlook the fact that Pakistan’s military is a match to its own. The PAF pilots surprised Israeli Air Force, when flying mostly Russian aircraft they shot down several relatively superior Israeli aircraft in air combat in the 1973 Arab Israel war, shattering the invincibility myth of Israeli pilots who believed themselves to be too superior in skill and technology. The Pakistanis happened to be assigned to Jordanian, Syrian and Iraqi air forces on training missions when the war broke out and, unknown to the Israelis then, they incognito undertook combat missions.

After successfully destroying Iraqi nuclear reactor in 1981, Israelis planned a similar attack on Pakistan’s nuclear facilities at Kahuta in collusion with India in the 1980s. Using satellite pictures and intelligence information, Israel reportedly built a full-scale mock-up of Kahuta facility in the Negev Desert where pilots of F-16 and F-15 squadrons practiced mock attacks.

According to ‘The Asian Age’, London, journalists Adrian Levy and Catherine Scott-Clark stated in their book ‘Deception: Pakistan, the US and the Global Weapons Conspiracy’, that Israeli Air Force was to launch air attack on Kahuta in mid 1980s from Jamnagar airfield in Gujarat (India). The book claims that “in March 1984, Prime Minister Indira Gandhi signed off (on) the Israeli-led operation bringing India, Pakistan and Israel to within a hairs breadth of a nuclear conflagration”.

Another report claims that Israel also planned an air strike directly out of Israel. After midway and midair refueling, Israeli warplanes planned to shoot down a commercial airline’s flight over Indian Ocean that flew into Islamabad early morning, fly in a tight formation to appear as one large aircraft on radar screens preventing detection, use the drowned airliner’s call sign to enter Islamabad’s air space, knock out Kahuta and fly out to Jammu to refuel and exit.

According to reliable reports in mid 1980s this mission was actually launched one night. But the Israelis were in for a big surprise. They discovered that Pakistan Air Force had already sounded an alert and had taken to the skies in anticipation of this attack. The mission had to be hurriedly aborted.

Pakistan reminded the Israelis that Pakistan was no Iraq and that PAF was no Iraqi Air Force. Pakistan is reported to have conveyed that an attack on Kahuta would force Pakistan to lay waste to Dimona, Israel’s nuclear reactor in the Negev Desert. India was also warned that Islamabad would attack Trombay if Kahuta facilities were hit.

The above quoted book claims that “Prime Minister Indira Gandhi eventually aborted the operation despite protests from military planners in New Delhi and Jerusalem.”

McNair’s paper #41 published by USAF Air University (India Thwarts Israeli Destruction of Pakistan’s “Islamic Bomb”) also confirmed this plan. It said, “Israeli interest in destroying Pakistan’s Kahuta reactor to scuttle the “Islamic bomb” was blocked by India’s refusal to grant landing and refueling rights to Israeli warplanes in 1982.” Clearly India wanted to see Kahuta gone but did not want to face retaliation at the hands of the PAF. Israel, on its part wanted this to be a joint Indo-Israeli strike to avoid being solely held responsible.

The Reagan administration also hesitated to support the plan because Pakistan’s distraction at that juncture would have hurt American interests in Afghanistan, when Pakistan was steering the Afghan resistance against the Soviets.

Although plans to hit Kahuta were shelved, the diatribe against Pakistan’s nuclear program continued unabated. Israel used its control over the American political establishment and western media to create hysteria. India worked extensively to promote paranoia, branding Pakistan’s program as unsafe, insecure and a threat to peace. The fact is otherwise. It is technically sounder, safer and more secure than that of India and has ensured absence of war in the region.

The US invasion of Afghanistan provided another opening for Indo-Israeli nexus to target Pakistan’s strategic assets. This time the strategy was to present Pakistan as an unstable state, incapable of defending itself against religious extremist insurgents, creating the specter of Islamabad and its nuclear assets falling in their hands. Suggestions are being floated that Pakistan being at risk of succumbing to extremists, its nuclear assets should be disabled, seized or forcibly taken out by the US. Alternatively, an international agency should take them over for safe keeping.

Pakistan has determinedly thwarted the terrorist threat and foiled this grand conspiracy. The terrorists have either been eliminated or are on the run. Pakistan has made it clear that it would act decisively against any attempt by any quarter to harm its nuclear assets. But if the game is taken to the next level, the consequences would be disastrous for the region.

The Indo-Israeli nexus is losing initiative. But as long as the American umbrella is available Afghanistan will remain a playground for mischief mongers. It is now up to the US to walk its talk and prove its claim that it wants to see a secure and stable Pakistan. It must pull the plug on conspiracies to destabilize Pakistan.