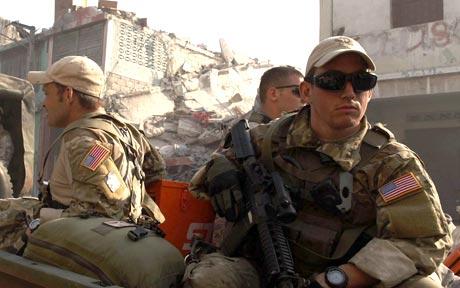 Members from the 84th US Air Force Division on the streets of Port-au-Prince (Photo: EPA)

It’s a good thing the Haitian government did virtually nothing to help its people following the earthquake; otherwise it would have been condemned as “socialist” by Fox News, Sarah Palin, the teabaggers, and other right-thinking Americans.

The last/only Haitian leader strongly committed to putting the welfare of the Haitian people before that of the domestic and international financial mafia was President Jean-Bertrand Aristide.

Being of a socialist persuasion, Aristide was, naturally, kept from power by the United States — twice; first by Bill Clinton, then by George W. Bush, the two men appointed by President Obama to head the earthquake relief effort. Naturally. 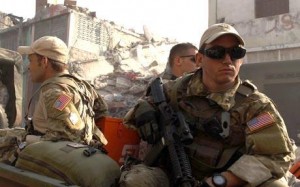 Members from the 84th US Air Force Division on the streets of Port-au-Prince (Photo: EPA)

Aristide, a reformist priest, was elected to the presidency, then ousted in a military coup eight months later in 1991 by men on the CIA payroll.Ironically, the ousted president wound up in exile in the United States.

In 1994 the Clinton White House found itself in the awkward position of having to pretend — because of all their rhetoric about “democracy” — that they supported the democratically-elected Aristide’s return to power. After delaying his return for more than two years, Washington finally had its military restore Aristide to office, but only after obliging the priest to guarantee that after his term ended he would not remain in office to make up the time lost because of the coup; that he would not seek to help the poor at the expense of the rich, literally; and that he would stick closely to free-market economics.

This meant that Haiti would continue to be the assembly plant of the Western Hemisphere, with its workers receiving starvation wages, literally. If Aristide had thoughts about breaking the agreement forced upon him, he had only to look out his window — US troops were stationed in Haiti for the remainder of his term. [1]

On February 28, 2004, during the Bush administration, American military and diplomatic personnel arrived at the home of Aristide, who had been elected to the presidency once again in 2002, to inform him that his private American security agents must either leave immediately to return to the United States or fight and die; that the remaining 25 of the American security agents hired by the Haitian government, who were to arrive the next day, had been blocked by the United States from coming; that foreign and Haitian rebels were nearby, heavily armed, determined and ready to kill thousands of people in a bloodbath.

Aristide was then pressured into signing a “letter of resignation” before being kidnaped and flown to exile in Africa by the United States.[2]

The leaders and politicians of the world who pontificate endlessly about “democracy” and “self-determination” had virtually nothing to say about this breathtaking act of international thuggery. Indeed, France and Canada were active allies of the United States in pressing Aristide to leave.[3]

And then US Secretary of State Colin Powell, in the sincerest voice he could muster, told the world that Aristide “was not kidnapped. We did not force him onto the airplane. He went onto the airplane willingly. And that’s the truth.” [4] Powell sounded as sincere as he had sounded a year earlier when he gave the UN his now-famous detailed inventory of the chemical, biological and nuclear weapons that Saddam Hussein was preparing to use.

Howard Zinn said, “The chief problem in historical honesty is not outright lying. It is omission or de-emphasis of important data.” However, that doesn’t mean the American mainstream media don’t create or perpetuate myths.

Here’s the New York Times two months ago: “Mr. Aristide, who was overthrown during a 2004 rebellion …”[5]

Now what image does the word “rebellion” conjure up in your mind? The Haitian people rising up to throw off the shackles put on them by a dictatorship? Or something staged by the United States?

Aristide has stated that he was able to determine at that crucial moment that the “rebels” were white and foreign. [6] But even if they had been natives, why did Colin Powell not explain why the United States disbanded Aristide’s personal security forces? Why did he not explain why the United States was not protecting Aristide from the rebels, which the US could have done with the greatest of ease, without so much as firing a single shot? Nor did he explain why Aristide would “willingly” give up his presidency.

The massive US military deployment to Haiti in the wake of the earthquake has been criticized in various quarters as more of an occupation than a relief mission, with the airport in the capital city now an American military base, and with American forces blocking various aid missions from entering the country in order, apparently, to serve Washington’s own logistical agenda.

But the large military presence can also serve to facilitate two items on Washington’s political agenda — preventing Haitians from trying to emigrate by sea to the United States and keeping a lid on the numerous supporters of Aristide lest they threaten to take power once again.