Burma: An Interview with Zoya Phan 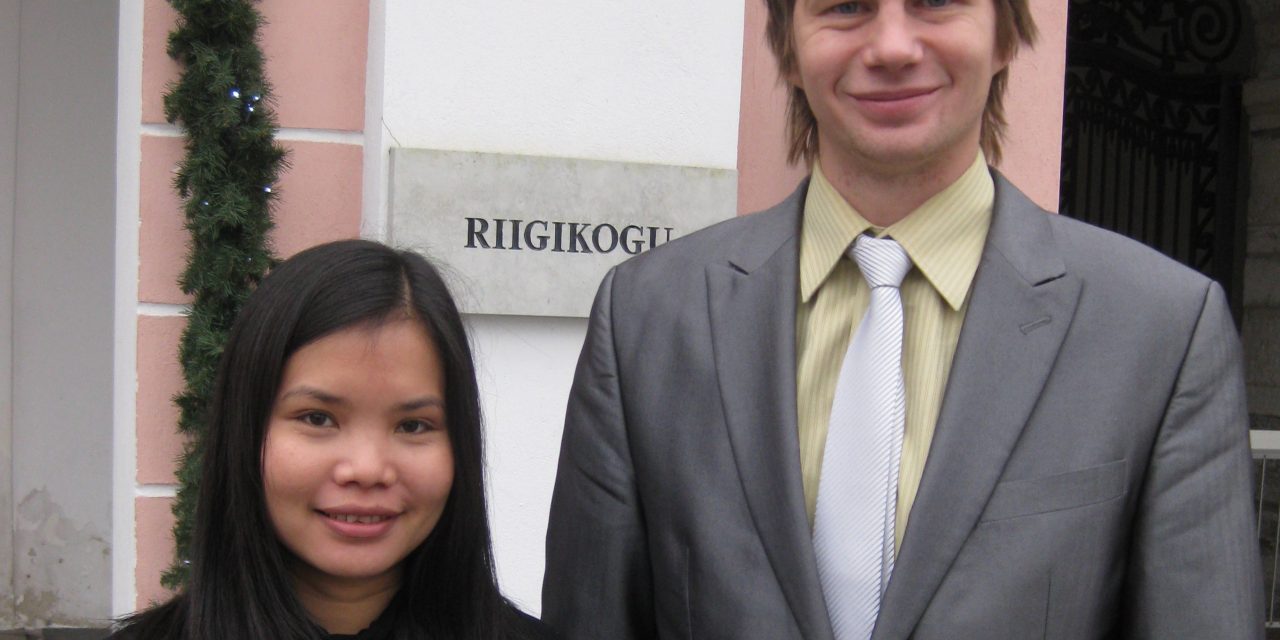 Zoya Phan (left) with Silver Meikar of the Reform Party, Parliamentary Assembly of the Council of Europe (PACE)

Zoya Phan is the International Coordinator for Burma Campaign UK. Her autobiography, “Little Daughter: Memoir of Survival in Burma and the West”, tells of how she and her family were forced to flee their village following the Burmese Army’s ongoing war against the ethnic Karen people. After seeking asylum in the United Kingdom, Ms. Phan has defied threats against her by representatives of the Burmese regime both in her home country and abroad. Zoya Phan conducts regular speaking tours to inform people worldwide about the plight of the Karen and other minorities in Burma.

D.C: As a person who has survived living in the remote jungles of Burma, constantly on the move and spending time in and out of refugee camps, how difficult was it for you to leave your past behind and then recount the details in writing your book, informing of the world what is going on beyond the borders?

Z.P: This is an emotional topic for me. I have never left my past behind because it’s quite difficult. I always think about my life in Burma’s Karen State, living in the refugee camps. Sometimes it comes back in my dreams at night. For many years, I have been thinking a lot about my people and the situation in my homeland because I want to see change in my country. I want to be a part of that movement.

D.C: What aspects of life in the camps and living in the jungles have left the biggest impact on you? 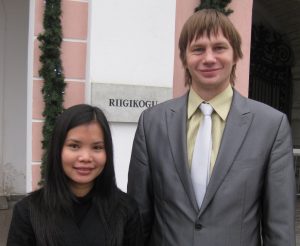 Zoya Phan (left) with Estonian MP Silver Meikar of the Reform Party, Parliamentary Assembly of the Council of Europe (PACE)

Z.P: I grew up in a small community in a Karen village surrounded by beautiful mountains. As children, we would swim in the river and hike into the jungle. We would pick mushrooms, flowers, and fruits. We would play with butterflies. Life was so peaceful. But when I was just 14 years old, the Burmese Army attacked our village. We had to leave everything behind and run for our lives to become refugees in Thailand. Many people were put together in a small camp and we were not allowed to go out.

For young people, our future seemed uncertain. Our educational prospects were limited and we were entitled to only basic health care. We had no ID cards and no passport. Most of us could not go to a Thai University, school, hospital and work, or travel in Thailand. It was more like a prison.

D.C: When you were recalling these experiences, did you have doubts as to whether you should share these with your readers?

Z.P: It’s very important to tell the world what’s going on in Burma and ask for support from the international community in order to see positive change in my homeland. I have come to understand more about how personal stories can touch people’s hearts and help them take action to help the people in Burma. But the dictatorship does not want the world to know about their brutal actions against civilians. I am lucky to be able to have this opportunity to speak out, even though it has put me in danger. I have survived attacks, including three attempts on my life. But sadly, my father Padoh Mahn Sha Lah Phan was assassinated by an agent acting for the Burmese regime on February 14, 2008.

D.C: You spoke at the British Conservative Party Conference in 2007 where ,during a speech, you held up a pair of leg shackles. What issues did you want to put directly to the delegates with this gesture? What was going through your mind?

Z.P: These shackles were smuggled out from a prison in Burma. I showed this to the audience to describe the systematic torture used by the regime against political activists including arrested Buddhist monks. The more I explained it, the angrier I felt towards not only the regime, but also against the international community for not speaking up loudly enough. They knew how little they have done for the people of Burma. I am still unhappy by the response (from the international community towards the situation in Burma). There is no global arms embargo against Burma’s dictatorship. There is no United Nations (UN) commission of inquiries into war crimes and crimes against humanity committed by the regime, although the U.N. itself has accused the regime of breaking the Geneva Conventions by deliberately targeting civilians in Eastern Burma.

D.C: What are the stances of countries in Europe towards the Burmese regime? Is there unanimous support for tougher sanctions?

Z.P: A handful of countries like the United Kingdom, Czech Republic, Ireland and Estonia support tougher sanctions in Burma. Other EU countries are sitting on the fence. But France has Total (Oil company), the biggest foreign investor in Burma. Its joint venture with Burma’s dictatorship earns the military regime hundreds of millions of dollars every year, which is spent on arms to attack civilians. France does not prioritize human rights at the core of their foreign policy. Germany generally opposes economic sanctions. They even argue sanctions should be relaxed. They put business interests in Burma and other Asian countries ahead of human rights in my country.

Z.P: We do welcome the U.S delegation led by Kurt Campbell as part of the U.S. government’s high level engagement policy with Burma. This is as important as maintaining sanctions, and its approach and critical dialogue and this approach should lead to a tangible outcome. We can’t have endless discussions like the U.N., where there hasn’t been any democratic reform in Burma. At the same time, the U.S. and the international community should also engage with genuine representatives from ethnic nationalities groups such as the Karen National Union, Karenni National Progressive Party, the Restoration Council of Shan State and others.

D.C: How confident are you that the recently adopted ASEAN Intergovernmental Commission on Human Rights (AICHR) will achieve success in bringing members of the junta to justice for crimes of genocide?

Z.P: The ASEAN Intergovernmental Commission on Human Rights (AICHR) does not have relevance in Burma. It is controlled by ASEAN governments, but it doesn’t even call for the release of Aung San Suu Kyi or all political prisoners, let alone taking legal action against the generals in Burma. Their leaders are not interested in the wellbeing of the people. More than 3,300 villages have been destroyed in the past 15 years in Eastern part of Burma alone, forcing hundreds of thousands of people from their homes. Thousands more are used as slaves. Around half a million of people are displaced in the jungle with no access to health care and education. The regime uses the policy of ethnic cleansing and rape as weapons of war. Soldiers rape girls as young as five years old.

ASEAN should join the EU, U.S., Canada and Australia in supporting a global arms embargo and put more pressure on the junta to force them into reform.

D.C: Is this offensive by the Burmese Army part of their “one blood” vision you described in your speech in Prague on “Religious, Cultural and Indigenous Rights”?

Z.P: The regime in Burma doesn’t encourage and tolerate ethnic diversity. We have different ethnic groups in Burma and the junta is mainly made up from the Burman ethnic group. Their goal is to pursue a ‘Burmisation policy’ where ethnic peoples are forcibly assimilated and not permitted to have their own traditions, rights and cultures practised or respected. In Karen State, ethnic people in cities controlled by the regime are not allowed to learn our language and history freely. With every passing generation, we are losing more of our identity.

D.C: Let’s turn to Aung San Suu Kyi, leader of the National League for Democracy Party. What words from Daw Aung San Suu Kyi provide you with inspiration to continue your fight for justice on behalf of not only the Karen but for all the people of Burma who have endured pain and isolation for so long?

Z.P: Aung San Suu Kyi is a leader that people from different ethnic backgrounds can trust, a leader who can bring unity in Burma as she has always been standing by the people’s side. Her actions are stronger then her words. Her support for the establishment of a federal Burma means so much to me personally. I dream that my country’s future is one where everyone can live in peace and security, and be treated equally under the rule of law and justice regardless of our ethnicity, religion, race and gender.

It is because of these reasons the regime is so afraid and scared of her.

D.C: What effect do you think films such as Burma VJ and Rambo 4 starring Sylvester Stallone have in raising the conscience of people worldwide regarding the situation in Burma? What extra details, if any, could have they added?

Z.P: These films are fantastic in raising awareness about what is going on in Burma. When the media finished reporting on the 2007 Saffron Revolution, Burma VJ still raises awareness about Burma’s situation. Those video journalists risked their lives making sure that information got out to the world. If caught or arrested, these VJs could end up in prison for 20 years.

Burma VJ continues to alert people around the world about the current situation. In late November, the documentary screened in Vilnius, Lithuania, where I joined a three-person panel in a post-film discussion. We met with Vygaudas Ušackas, Lithuania’s Minister for Foreign Affairs. He promised to speak up in EU meetings, defend sanctions and not relax pressure on Burma’s generals.

With Rambo 4, the movie scenes reflect the real situation in Eastern Burma where the regime engages in ethnic cleansing. People know about Aung San Suu Kyi, political prisoners, Buddhist monks and student movements. But they don’t know about what is happening in eastern Burma, where ethnic people have been attacked by the Burmese Army for decades. Rambo 4 raises awareness about this.

The people in Burma will continue until we have human rights, democracy and freedom in the country. If we don’t resist, our whole race could be destroyed.  People in Burma want to make sure that this generation is the last generation who suffers under a military dictatorship.

You can visit Burma Campaign UK’s homepage by going to http://www.burmacampaign.org.uk/.