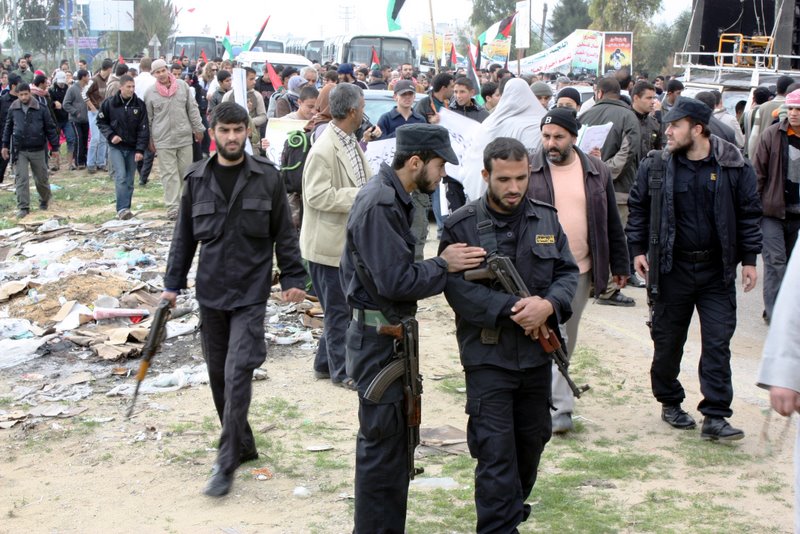 “One week ago they came and said they will take the lead,” he said on the day of the march.

When the government announced it wanted to give a speech at the march, Shaath said civil society took this as a sign that the event had been hijacked.

“They just want to embarrass us,” said Ahmed A. Alnajjar, director of international relations at the Ministry of Education, who gave a speech at the march.

Civil society had done a poor job of coordinating with the government, said Alnajjar, and Hamas’ main concern was for security.

“I’m not sure whether you know, a few months ago, some people were killed in Rafah, some people who claimed they were part of Al Qaeda,” Alnajjar told me. “So that’s why we were a little bit worried about the safety of foreign people.”

Hamas was fighting the War on Terror.

Tighe Barry, the American coordinator with Code Pink who went to Gaza, believed civil society had done little to actually prepare for the march and the arrival of potentially over a thousand foreigners, and that this prompted the government to take control.

Yousri Alghoul, who served as liaison between Hamas and the activists, said Hamas was concerned because elements bent on destabilizing the government could kidnap or hurt foreign visitors to make Hamas look bad. But he opined that the gruff security forces could probably have benefited from courses on how to deal with foreigners more amicably.

Retired U.S. Army colonel and former diplomat Ann Wright met with Egyptian officials and diplomats early on to inform them of the plan to have over a thousand activists shuttled through Egyptian territory and into Gaza. Since Egypt is the only country to share a border with Gaza aside from Israel, having the support of the authorities was crucial.

“We put together the database of all the people who have signed up and we contacted the Egyptian embassy in person,” she said in October in New York City. “We meet with the ambassador or the deputy ambassador and the political officer which is our point of contact.”

Organizers gave the authorities the names of all participants, which were then sent to the foreign ministry in Cairo. Wright believed past Code Pink delegations to Gaza had been successful precisely because of this diplomatic and cooperative approach.

But in December, when the Egyptian foreign ministry, citing escalating tensions along the border, announced the activists would not be allowed into Gaza days before the bulk of them were due to arrive in Cairo, the list of names became a weapon. The authorities were able to use their database of names to profile foreigners traveling to the Sinai and detain them.

“We feel devastated that this government thinks that for some crazy reason we shouldn’t be allowed to go there,” said Medea Benjamin in Cairo, an organizer and co-founder of Code Pink, days before the march was due to take place. “I think that Israel has put its foot down and said ‘you better not let this march happen to the Israeli border.’”

Code Pink offered to reimburse half of the fees participants had paid; either $250 or $400 depending on the type of accommodation in Gaza and to cover transportation from Cairo to Gaza and back. Everyone had paid for their airfares separately. Many of the marchers now needed the money to afford their extended stays in Cairo. 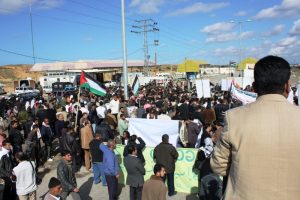 Participants speculated on Egypt’s true motives for derailing the march. Some pointed to the congressionally appropriated military financing grants Egypt receives each year from the United States, and to the influence Israeli lobby groups have in the U.S. Congress. Others pointed to the fact that Hamas is an offshoot of Egypt’s Muslim Brotherhood, the main political opposition, and that Egyptian President Hosni Mubarak wanted to limit its influence in his country. Others thought the President of the Palestinian Authority, Mahmoud Abbas of Fatah who presides from the West Bank, had put pressure on Egypt to keep Hamas isolated. Possibly all these assertions had some truth to them, but the Egyptians were not forthcoming with explanations.

When the Egyptians announced that a hundred marchers would be allowed to enter Gaza, many saw this as affirmation that Egypt’s claim that security concerns were behind its decision was bogus. After all, if it were true, why were the authorities so determined to limit or prohibit any shows of solidarity with the people of Gaza on the streets of Cairo? When activists had wanted to set candles afloat in the Nile’s murky waters on the night of Dec. 27, police threatened to revoke the operating licenses of boats that took foreigners on board. When activists tied commemorative ribbons and flowers to the 6th October Bridge, police ripped them off.

But on Jan. 6, as if to redeem Egypt’s security claim, Hamas loyalists rallied on the Gaza side of the border to protest Egypt’s construction of an underground steel wall that will block the hundreds of smuggling tunnels that make life in Gaza possible, and its restrictions on the Viva Palestina convoy. Stone’s were thrown, shots were fired, and an Egyptian soldier was killed.

Historically, peaceful movements have been successful inside countries where the protests disrupt or disable the functioning of government.

“If a non-violent protest has the ability to stop things, to make it difficult for the established powers to function, then it’s exercising what a lot of sociologists call leverage,” said American sociologist Michael Schwartz, professor of sociology at the State University of New York. “That’s the lens I think needs to be applied: does this protest generate leverage of some sort?”

Many amongst the crowd that gathered on Ramses Street in Cairo at 7 a.m. on Dec. 30, felt their leverage was in numbers, and that the Egyptian proposal to allow a hundred people out of over 1,300 to travel to Gaza was divisive and unacceptable. Many were there to convince the activists heading to Gaza not to board the buses.