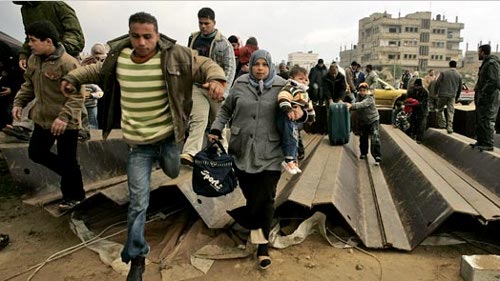 Those pesky taxi drivers of Gaza are always circulating rumours. One story that made the rounds during the first Palestinian uprising in 1987 claimed that an Arab army crossed the Sinai desert to save Palestinians from the daily killings and protracted state of siege which caused untold suffering for civilians.

The army in question would change from time to time, but the focus inevitably returned to Egypt. The rumour of an Egyptian military intervention persevered through the years, and it registered deeply in Palestinian psyche, especially among those living in Gaza. 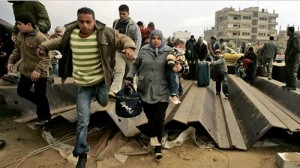 My father, as many in his generation, fought in the Egyptian army and the Palestinian Liberation Army. Following defeat in the war of 1967, he was hauled along wounded and dead Egyptian soldiers across Sinai, as well as on a floating army bridge over the Suez Canal under intense Israeli aerial bombardment. As a child, I once accompanied him on a journey to an impoverished neighborhood in Cairo to look for an Egyptian war buddy of his. When we found out that he was long dead, my father wept. Confused and scared among the ailing buildings, I too cried.  Indeed, the bond between Egyptians and Palestinians is historical, everlasting, cemented in blood, sweat and tears.

Yes, everlasting, despite the responses of the Egyptian government to the more recent suffering of Palestinians in Gaza.

When the Palestinian people democratically elected Hamas to lead the Palestinian legislature in 2006, they were aware of the possible repercussions. They have become accustomed to the ‘collective punishment’ employed every time actions fail to meet Israeli expectations. They also understand well the influence of the pro-Israel lobby on American foreign policy, and know of Cairo’s commitment to political ‘moderation’ and unabashed tiptoeing to the US. But never, in their wildest imagination did Palestinians foresee the measures that Egypt would take to stifle their democratic decision, suppress their resistance and cut off the very lifelines that keep Gaza breathing.

Israel has employed every possible trick in its book to weaken Gaza’s resolve; yet time after time, it has failed miserably. Even after turning the already starving Gaza Strip into a large and inescapable killing field on December 27, 2008, Gaza is yet to surrender. Three weeks of ceaseless bombardment killed over 1,400 Palestinians and wounded over 5,500 more, but it was no match to Gaza’s resolve.

Indeed, Gazans have always devised ways to survive against the odds. With difficulty, they dug tunnels to Egypt, and through these tunnels, basic necessities, such as food, medicine, toys, and some livestock were able to trickle into Gaza. On February 4, 2009, shortly after Israel declared an end to its one-sided military operations, military experts from various, mostly Western countries gathered in a two-day conference hosted by Denmark.

The goal was to halt arms smuggling into Gaza, and not, as should have been the case, to investigate Israel’s illegal use of lethal weapons against an unarmed population. Nor was it to call on various countries to halt their weapon exports to Israel.

The response was a moral travesty, to say the least. However, the news regarding this subject ceased for a while, interrupted by an occasional Israeli strike at alleged tunnels, or an Egyptian measure to ensure the closure of all tunnels at its side of the border. Meanwhile, the siege continued unabated, and Egypt held tight to its ‘commitment’ to ensure its success.

More recently, news of an enormous metal wall that Egypt erected at its border with Gaza has come to the fore. The Egyptian decision is both politically and financially loaded. Considering that the US – spurred on by Israel – has strived to develop ways to completely choke Gaza, one can safely conclude that the decision has not come solely from Egypt, though as a sovereign country the latter must still be held fully accountable. According to Press TV, Karen Abu Zaid, United Nations Relief and Works Agency Commissioner-General described the wall as more dangerous than the Bar Lev Line, which was built by Israel along the eastern coast of the Suez Canal following the capturing of the Sinai Peninsula from Egypt in 1967. The Egyptian wall is arguably more dangerous because it will increase the suffering of an already tormented civilian population.

But more than dangerous, it is also disheartening. Palestinians, including some in the Hamas government never cease to refer to Egypt and Egyptians as “Sister Egypt” and “Egyptian brethren”. Why then are Sister Egypt and the Egyptian brethren taking part in this injustice and allowing Israeli violence to perpetuate? Money? Political validation? Attempts at regional relevance and fear of dismissal if they dare defy Washington’s will?

None of these reasons are convincing. The ties between Egypt and Palestine are too rooted in history; the rapport is too personal, too familial to allow for material or temporary political interests to stand in the way between two ancient peoples with awe-inspiring histories. Now I fully appreciate why my father wept at the death of his Egyptian friend. And I believe that no steel wall is large or thick enough to undermine that moment; no government policies or self-seeking officials are wicked enough to dent the bond that link the peoples of Palestine and Egypt. I also believe that there should be no amount of money large enough to justify the imprisonment of a whole nation, especially one’s own “brethren.”

I wonder what is the latest rumour circulated these days by Gaza’s taxi drivers. A million Egyptians storm the border with Gaza, carrying food, medicine and toys? Strangely enough, I would still believe it. Those pesky drivers of Gaza!