The Initial Assessment Report of the Situation in Afghanistan by General Stanley McChrystal has caused the Afghanistan issue to again come under spotlight.

The strategy review was received by Pentagon in August but was withheld by Robert Gates and leaked to the media late September. McChrystal’s resource request was separated from the review and its release delayed in order to gauge the public and Congressional response to the review itself and allow America’s compliant corporate media to prepare domestic audiences for the possibility of the largest escalation of foreign armed forces in Afghanistan’s history by leaking guesstimates. 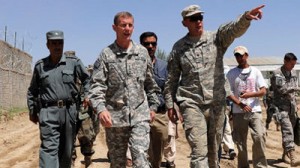 The review was not authored by General McChrystal himself. A group of about a dozen civilian security experts, mostly from Washington think tanks wrote the review. Spencer Ackerman writing in the Washington Independent says very few of these experts are primarily Afghanistan experts and “no one out of these … primarily studies Afghanistan”.

In view of this it is difficult to say how accurately the review presents the military commanders’ professional perspective, but the debate that ensued, raised three fundamental questions: America’s mission, strategy and resources for Afghanistan.

President Obama has still not been able to convince his people, or the world, as to the mission of the Afghan campaign. Other than repeating the Bush rhetoric about Al Qaeda being a threat to American security, Obama administration had nothing concrete to add, although Western sources say only about 100 Al Qaeda members remain in Afghanistan.

No one has explained why over the last eight years the American and NATO forces have been unable to locate and eliminate top Al Qaeda leadership, when in the 90’s the Americans easily hunted down Aimal Kasi in Balochistan, a much lesser fugitive, for having killed some CIA employees at Langley. Obama’s case against Osama does not stand to reason in the backdrop of Bush and senior members of his administration having said that locating Osama bin Laden and his close associates was never their priority. The fact is that Osama died long ago. President Musharraf is on record for having said that. But Osama is being kept alive by the American administration to retain justification for continuing the Afghan war.

Consequently, nine months into his administration and Obama’s own party strongly questions the objectives of this war, which the chief of British armed forces estimates will last decades. Is it any wonder then that the American people are increasingly opposing the loss of American lives and dollars in a war without purpose and without end?

The review highlights very difficult and complex conditions on the ground that make the prospects of defeating the Taliban bleak. It recommends a new strategy that changes the very fundamentals of the war.

Its main focus is concentrated and intensified counterinsurgency war. General McChrystal calls it the ‘population security strategy’ that was tried by General Patraeus in Iraq with some success and both generals now want to replicate it in Afghanistan. It aims at ‘providing security to the Afghan population against fear and intimidation that drives them to support the Taliban’ and simultaneously engage in massive nation building.

McChrystal slams NATO’s International Security Assistance Force (ISAF) for lacking clear objectives, unity of command and coordination and for waging a directionless war. He blames ISAF for making the foreign forces look like enemies of the Afghan people instead of friends.

According to him “ISAF requires a new strategy that should be executed through an integrated civilian-military counterinsurgency operation…. in an environment that is uniquely complex….”

The review states that the war will not only escalate within Afghanistan but will also be stepped up inside Pakistan and may even target Iran. It claims: “Afghanistan’s insurgency is clearly supported from Pakistan. Senior leaders of the major Afghan insurgent groups are based in Pakistan, are linked with al Qaeda and other violent extremist groups, and are reportedly aided by some elements of Pakistan’s ISI.” The review also accuses Iranian Quds Force of training fighters for certain Taliban groups. These appear to be provocational fabrications.

Since the new strategy involves a full blown counterinsurgency campaign, it is resource intensive. The number of troops, resources and the time needed to take this campaign to conclusion would be very difficult for Obama to agree to.

McChrystal wants a total of 500,000 troops and enough resources to sustain the campaign over a five year period. This would include 68,000 U.S. troops that will be in position by this year’s end, 35,000 NATO troops currently available, 240,000 Afghan soldiers and 160,000 Afghan policemen that are planned to join foreign troops after training. Despite efforts, the non-availability of Afghan soldiers and policemen in required numbers and in time remains a major bottleneck due to poor training results and shortage of new recruits willing to serve. Meanwhile, this shortfall will have to be met by additional 40,000 US troops that McChrystal will likely ask, raising their strength from 68,000 to over 100,000.

In his stark assessment McChrystal makes the key point:  Although more troops will not guarantee victory in Afghanistan, the lack of them could lead to defeat because the Taliban insurgency has grown stronger than U.S. commanders anticipated.

In President Obama’s own team the civil-military divide is visible. Pentagon’s civil leadership and the Congressional Democrats are uncomfortable with such high demand for resources and a massive nation building initiative, while the military high command is united behind this proposal.

The civilian advisers are keen to explore less costly options such as persuading Taliban to give up fighting, particularly peeling low- and mid-level Afghan fighters away from the insurgency and reintegrating them in the Afghan society, thereby weakening the Taliban and isolating Al Qaeda. They also advocate escalating targeted attacks on Al Qaeda inside Pakistan.

Obama has delayed his decision about additional resources pending in-depth review of the proposed strategy. “I don’t want to put the resource question before the strategy question,” Obama said on CNN. He said he understands “the public’s weariness of this war” and wants “to make sure that I get the best answers possible, particularly before I make decisions about sending additional troops into the theater.”