War Criminals Are Becoming The Arbiters Of Law 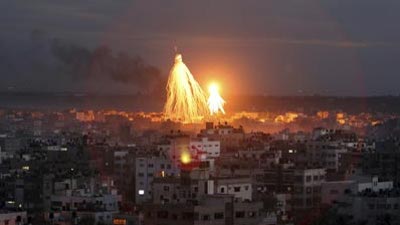 The double standard under which the Israeli government operates is too much for everyone except the brainwashed Americans.  Even the very Israeli Jerusalem Post can see the double standard displayed by “all of Israel now speaking in one voice against the Goldstone report”:

And there are no limits on our right to self-defense. There is no such thing as ‘disproportionate.’

We can deliberately destroy thousands of Gazan homes, the Gazan parliament, the Ministry of Justice, the Ministry of Interior, courthouses, the only Gazan flour plant, the main poultry farm, a sewage treatment plant, water wells and God knows what else.

The Goldstones of the world call this hypocrisy, a double standard. How dare they!  Around here, we call it moral clarity.

A person would never read such as this in the New York Times or Washington Post or hear it from any US news source.  Unlike Israeli newspapers, the US media is a complete mouthpiece for the Israel Lobby.  Never a critical word is heard.

This will be even more the case now that the Israel Lobby, after years of effort, has succeeded in repealing the First Amendment by having the Hate Crime Bill attached to the recently passed military appropriations bill.  This is the way the syllogism works:

As the Jerusalem Post notes, this syllogism has “moral clarity.”

Britain’s ambassador to the United Nations, John Sawers, stepped into the hate crime arena when he told Israel Army radio that the Goldstone report on Israel’s military assault on Gaza contains “some very serious details which need to be investigated.”

A year from now when the Anti-Defamation League has its phalanx of US Department of Justice (sic) prosecutors in place, Sawers would be seized and placed on trial.  Diplomatic immunity means nothing to the US, which routinely invades other countries, executes their leaders or sends them to the Hague for trial as war criminals.

In the meantime, however, the Israeli government put Sawers and the UK government on notice that British support for the Goldstone Report would result in the destruction of the double standard that protects the West and Israel and create a precedent that would place the British in the dock for war crimes in Iraq and Afghanistan.

“London,” declared the Israeli government, “could find itself in handcuffs if it supports the document [the Goldstone report].”

Once the DOJ’s hate crime unit us up and running, “self-hating Jews,” such as leaders of the Israeli peace movement and Haaretz and Jerusalem Post journalists, can expect to be indicted for anti-semitic hate crimes in US courts.