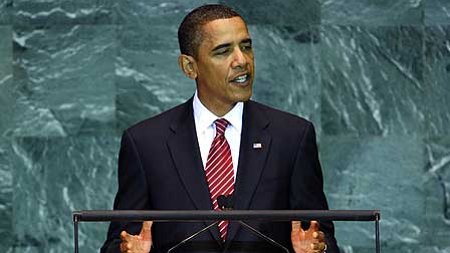 It took 25 years longer than George Orwell thought for the slogans of 1984 to become reality. “War is Peace,” “Freedom is Slavery,” “Ignorance is Strength.” I would add, “Lie is Truth.” The Nobel Committee has awarded the 2009 Peace Prize to President Obama, the person who started a new war in Pakistan, upped the war in Afghanistan, and continues to threaten Iran with attack unless Iran does what the US government demands and relinquishes its rights as a signatory to the non-proliferation treaty. 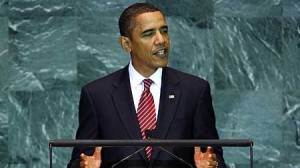 The Nobel committee chairman, Thorbjoern Jagland said, “Only very rarely has a person to the same extent as Obama captured the world’s attention and given its people hope for a better future.” Obama, the committee gushed, has created “a new climate in international politics.” Tell that to the 2 million displaced Pakistanis and the unknown numbers of dead ones that Obama has racked up in his few months in office. Tell that to the Afghans where civilian deaths continue to mount as Obama’s “war of necessity” drones on indeterminably.

No Bush policy has changed. Iraq is still occupied. The Guantanamo torture prison is still functioning. Rendition and assassinations are still occurring. Spying on Americans without warrants is still the order of the day. Civil liberties are continuing to be violated in the name of Oceania’s “war on terror.”

Apparently, the Nobel committee is suffering from the delusion that, being a minority, Obama is going to put a stop to Western hegemony over darker-skinned peoples. The non-cynical can say that the Nobel committee is seizing on Obama’s rhetoric to lock him into the pursuit of peace instead of war. We can all hope that it works. But the more likely result is that the award has made “War is Peace” the reality.

Obama has done nothing to hold the criminal Bush regime to account, and the Obama administration has bribed and threatened the Palestinian Authority to go along with the US/Israeli plan to deep-six the UN’s Goldstone Report on Israeli war crimes committed during Israel’s inhuman military attack on the defenseless civilian population in the Gaza Ghetto.

The US Ministry of Truth is delivering the Obama administration’s propaganda that Iran only notified the IAEA of its “secret” new nuclear facility because Iran discovered that US intelligence had discovered the “secret” facility. This propaganda is designed to undercut the fact of Iran’s compliance with the Safeguards Agreement and to continue the momentum for a military attack on Iran.

The Nobel committee has placed all its hopes on a bit of skin color. “War is Peace” is now the position of the formerly antiwar organization, Code Pink. Code Pink has decided that women’s rights are worth a war in Afghanistan. When justifications for war become almost endless–oil, hegemony, women’s rights, democracy, revenge for 9/11, denying bases to al Qaeda and protecting against terrorists–war becomes the path to peace. The Nobel committee has bestowed the prestige of its Peace Prize on Newspeak and Doublethink.