U.S. Interests vs. The Jewish State 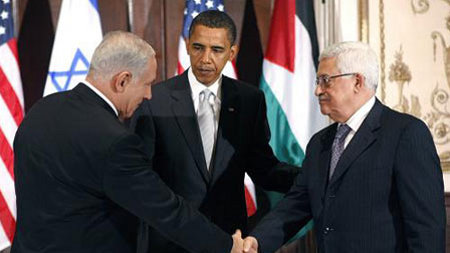 Barack Obama’s recent conduct at the U.N. removed all remaining doubt as to Israeli influence inside this latest U.S. presidency. When he uttered the phrase “the Jewish state of Israel,” he provided precisely the provocation required to ensure that peace in the Middle East will continue to be deferred. 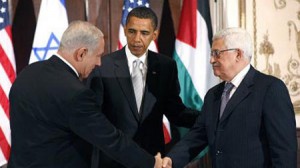 When, in May 1948, Christian-Zionist Harry Truman agreed to recognize an enclave of Jewish-Zionist extremists as a nation state, he struck out “Jewish state” and wrote the “state of Israel.” Despite assurances from Zionist lobbyist Chaim Weizmann that Israel would be a democracy, Truman feared the Zionist state might become what it became: a racist theocracy committed to an expansionist agenda that endangers U.S. interests in the region.

Barack Obama is a political product of Chicago’s West Side Jewish community and the nation’s “first Jewish president” according to former Clinton White House counsel Abner Mikva. Though branded an agent of change, when the zeitgeist of his campaign suggested that change might encompass a shift in the U.S.-Israeli relationship, those Ashkenazim who produced this presidential phenomenon let their displeasure be known.

The candidate of change quickly made the requisite rounds of pro-Israeli venues where he promised his benefactors there would be no change in an entangled alliance that, in retrospect, is the primary reason the U.S. finds itself at war in the Middle East. His U.N. performance thrilled those colonial Zionists whose duplicity troubled Truman. Meanwhile his “Jewish state” comment was guaranteed to inflame tensions in the region.

In the lead-up to this speech, Israelis told Obama what they intended to do—and then did it. Prime Minister Benjamin Netanyahu announced that he would use agreed-to terms of the Road Map to trade for stronger action against Iran. When Obama blinked and failed to insist that Israel comply with the agreed-to freeze on settlements, Netanyahu got what he sought—an emphasis on war with Iran rather than peace with the Palestinians.

Rather than announcing progress in negotiations, Obama announced only his hope that negotiations could soon resume—maybe. When Tel Aviv saw how easily they outwitted this novice negotiator, their agenda became more audacious. Obama’s mention of the code phrase “Jewish state” confirmed the ongoing role of the same stage managers who flew him directly from his speech in Cairo to a photo-op at Germany’s Buchenwald death camp.

Confirming the Zionists’ insider influence, Rahm Emanuel, widely described as the most powerful Chief of Staff in decades, assumed a prominent position in the U.N. chamber alongside the Secretary of State, the U.N. Ambassador and the National Security Adviser.

As with Cairo, Obama not only missed another opportunity to build goodwill, he missed a chance to restore the tattered credibility of the U.S after eight years of a Christian-Zionist president. Instead of progress toward peace, he offered yet another photo-op featuring Israeli and Palestinian leaders in yet another handshake signifying … nothing.

At what point will Americans realize they’ve been played for the fool by a purported ally? At what point does presidential conduct become culpable complicity?  Why would The New York Times report a decline in Barack Obama’s approval ratings in Israel?

Pundits put a positive spin on this foreign policy disaster by suggesting that Obama boxed Netanyahu in by finessing the settlements issue and forcing the Israeli leader to mention final status negotiations. That analysis misses the point. For Tel Aviv, there is no final status. The point of this six-decade process is more process—to avoid resolution.

Should Washington maneuver Israel into a box, Tel Aviv will collapse yet another coalition government. Or announce a resignation. That was Ben-Gurion’s ruse in June 1963 when John F. Kennedy insisted on inspections to stop Israel’s nuclear arms program. Ehud Olmert used the same negotiating tactic when it appeared that the Road Map could lead to a final status agreement. His well-timed resignation brought back Netanyahu.

The only party in a box is the U.S. The way out is to end this entangled alliance and the perils to U.S. interests that this “special relationship” was certain to create. In practical effect, in order to keep an Israeli government intact with which to negotiate, the U.S. must satisfy the most right-wing elements of the most right-wing political party of an infamously right-wing foreign government. How can that be in America’s interest?

Harry Truman’s recognition of this enclave as a legitimate state was an overwrought reaction to a unique combination of domestic and international circumstances that were manipulated to the advantage of violent religious extremists. Their ethnic cleansing of Palestine has yet to be either acknowledged or addressed.

After six decades of occupation and oppression, the best a U.S. president could offer Palestinians was an assurance that a U.S. ally—should negotiations resume—would come to the table with “clear terms of reference.” What greater insult could a U.S. president inflict on the Arab world than such an empty promise?

Obama’s performance was pathetic. Also, in effect, he gave the green light for another mass murder in the U.S. or in the European Union. As part of the pre-staging of another plausible rationale for the invasion of yet another Middle Eastern nation, mainstream U.S. media misrepresented remarks to the U.N. by Iranian President Mahmoud Ahmadinejad, giving credence to Iran as a nuclear threat. That Evil Doer portrayal is consistent with the pre-staging of other operations by which the U.S. was induced to war on false pretenses.

The next incident could be nuclear. While Obama was conceding to Israeli demands, Defense Minister Ehud Barack was meeting with U.S. Defense Secretary Robert Gates to assure him that Tel Aviv may yet attack Iran. In yet another signal to a worldwide audience about just who shapes U.S. foreign policy, the Pentagon chief was accompanied by Dennis Ross who joined Obama’s Iran advisory team from a think tank affiliate of the American Israel Public Affairs Committee.

For the first time in history, a U.S. president chaired a meeting of the U.N. Security Council. Presented with an occasion to caution an ally not to aggravate the nuclear arms race that Kennedy sought to halt in its infancy, Obama focused instead on Iran, forgoing a warning to the one nation in the Middle East known to have a nuclear arsenal. And the only nation able to deliver on the threat of deployment.

As an additional insult to Arab nations, the U.S. negotiating team urged—despite no sign of good faith by Tel Aviv—that those nations offer diplomatic gestures of goodwill. Or make “substantive concessions” as Netanyahu put it. No reason was offered why, after enduring more than sixty years of nonstop duplicity, they should agree to do so.

For anyone to assume or suggest that Israel is operating in good faith reflects a perilous misreading of history. What we just witnessed at the U.N. is how warfare is waged in the Information Age. This was neither the behavior of a U.S. ally nor a nation deserving U.S. support, friendship, arms or even recognition. Any further appeasement of this extremist enclave and Obama can rightly be charged with breach of his oath of office to defend the U.S. from all enemies, both domestic and foreign.