Is the Zionomedia Kingdom Invincible? 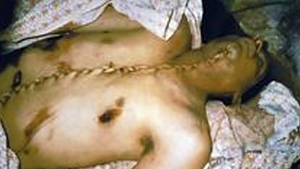 The suggestion that Israelis might be involved in illegal organ harvesting has sparked considerable controversy.

An August 17th article by Swedish photojournalist Donald Bostrom on longstanding suspicions amongst Palestinians that Israeli soldiers might have been involved in an illegal organ harvest conspiracy predictably sparked controversy and acrimony between the governments of Israel and Sweden.

The suggestion that Israelis might be involved in illegal organ harvesting has sparked considerable controversy.

With their exasperated and precipitate reactions, Israel officials once again underscored the accuracy and precision of an analogy made by the late founder of Iran’s Islamic Revolution, Ayatollah Ruhollah Khomeini, who likened the Israel’s stability to a “Spy Nest” some 30 years ago. A government whose very security and stability is threatened by the publication of a critical article should drastically review its policies to see what’s wrong with its trembling foundations. The same rule could be justly applied to Iranian authorities whose severe crackdown on the dissident media highlights major political shortages which the country suffers from; however, the Israeli lobby is so formidable and influential as to convince the “international community” to take its side in the face of such a “legitimacy crisis” while Iran has not ever nurtured such a network of lobbies worldwide.

It was not surprising that Israeli officials found their reputation tarnished by a simple article in a not- world-renowned press outlet. But with countless newspapers, TV channels, and websites around the globe that serve as a mouthpiece for Israel , the blatant exercise double standards shocks me incessantly.

The multilateral attacks on the freelance journalist rang the alarm to inform us about the profound influence of demagogic and obsolete instrument of the “anti-Semitism” accusation, and the blindfolded assumption that every piece of criticism against the government of Israel should be condemned as “defamatory, anti-Judaic and racist”.

Although I’ve long severed my hopes from Iranian officials and politicians, I should confess that they’ve prudently pinpointed the roots of what they refer to as “global Zionism”: the notion that Israel is a superlative country and everyone who dares to challenge its crimes should be assaulted by the media.

Look at the bitter reality of how a powerful lobby can simply attribute any criticism to the label of “anti-Semitism” and in so doing, deviating public attention from the context of what’s actually being said and implying that an “oppressed”, “subjugated” and “browbeaten” country such as Israel, which has historically undergone “unjust judgments” and “blood libels”, should be immune to any criticism in order to avoid provoking anti-Semitic sentiments. Per Ahlmark, the former Deputy Prime Minister of Sweden and member of the Swedish Committee Against Anti-Semitism, says in his 2004 book “Det är demokratin, dumbom” that “Aftonbladet is of course worst among the big newspapers when it comes to both playing on anti-Semitic strings and then denying that they have done so”.

The very fact that there should exist a committee against “anti-Semitism” in European and North American countries demonstrates the egocentric and supercilious nature of this regime. Why isn’t there a single committee to fight the growing anti-Islamic sentiments which the European states deliberately encourage and propagate?

What is the extraordinary force which can pressure the Ambassador of the same country to denounce and attack her fellow citizen in the face of an egotistic resentment that an apartheid regime may like to complain about? I still can’t digest Ambassador Elisabeh Borsiin Bonnier’s remarks, who “clearly” distanced herself from the article by Donald Bostrom. This should call our attention to the deep roots of global Zionism.

In a Wall Street Journal opinion article on September 2, Mr. Roland Poirier Martinsson, who rushed to the aid of Sweden’s supposedly blemished reputation, writing “Such is the climate that allows Scandinavia’s largest daily to function as an anti-Israeli publication”. The Globe and Mail ran an editorial the same day that said, “It is not the government’s role to denounce the nonsensical ramblings of a free society. By acting as if it is, Israel gives succor to those who oppose free speech … as when a Danish newspaper cartoon that depicted the Prophet Mohammed led to demagogic protests in the Muslim world. As a democracy, Israel should not descend to that level.”

The exertion of double standards is crying out from such statements. How deplorable is the comparison of offensive cartoons against an Abrahamic Prophet who some 1.5 billion people follow with the critical article that simply questions a possible violation of international law in one country out of the U.N.’s 193 member states?

What power could lead the Italian Foreign Minister to call on his European counterparts to denounce the article collectively, and what unseen force could drive the Swedish Ambassador in Israel to apologize for something she had no responsibility for? Has any German official ever apologized for the heartrending murder of Marwa El-Sherbini before the eyes of an official court in Dresden on July 1, 2009? Did Mr. Franco Frattini call his counterparts throughout the European Union to send a simple message of condolence or warn against the growing Islamophobia in Europe?

Countless articles full of derogatory statements and accusations against the Iranian people and authorities get published in the European and American media outlets each week; they unambiguously call the Iranian nation “terrorist” and their president a liar, a fraud and a hypocrite. The allegations of Iranian prisoners being raped in jail has been widely circulated all over the world, without anyone brining forth a single document as evidence; however, neither The Globe and Mail nor the Wall Street Journal nor New York Times nor the Washington Post has ever felt guilty of falsely spreading something which they don’t have any evidence for; they didn’t give any thought or consideration for the possibility of provoking anti-Iranian or anti-Islamic sentiment.

In how many articles has the Iranian nation been unequivocally called “terrorist”? Doesn’t it move anyone to collectively call 70 million people “terrorist”? What power does this invincible, authoritative, and egotistical global Zionism wield that makes it so impervious and so influential as to dominate headlines of world newspapers and elicit apology from the Swedish Ambassador?