Afghanistan: “Give me a rocket launcher…” 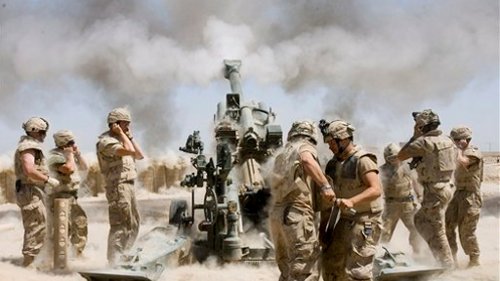 This article was first published in the Palestine Chronicle on September 14, 2009.

A Canadian polling company, the Angus Reid Global Monitor, [1] indicates that the majority of the world’s citizens express concerns about their countries’ role in the war, and the majority wish the troops to be removed. This includes the majority of the big hitters in NATO, and many other countries around the world. There are exceptions, with mixed results from U.S. polls indicating support for Obama but not necessarily for the war, and with India, a country with different political aspirations vis a vis Pakistan, still strongly supporting the Afghanistan occupation.

The contrast is obvious, wherein the elites and corporate and political powers of the (mainly) western world wish to remain in Afghanistan for the putative democratic values that they call for, yet ignore that very same democracy in their own homelands. The typical argument would be that this is a ‘difficult situation’ with ‘complex issues’, the standard line that serves as the apologetics for continuing their war making. The simplistic argument is for ‘democracy,’ without understanding that democracy required hundreds of years of peasant and labour revolts and protests before it even came close to its current status in the western countries. If we are a democracy, if the other countries are democratic, the people are calling for the troops to be removed from Afghanistan.

Democracy cannot be imposed at the barrel of a gun, especially in the situation of an occupying army with completely different cultural beliefs and systems trying to impose its will on another country that has been continually invaded and harassed by foreign powers over several centuries. It is no surprise that there is resistance, hatred, violence of all kinds in a land trammelled by various invaders, the majority not looking for anything but geopolitical control of the area for resources, transportation routes, and containment of ‘enemies.’

After each Canadian death, there is a flurry of angst and bad reporting about the situation in Afghanistan, generally showing that the media, the government and various other players buy into the ‘establishing democracy’ lie that remains the fundamental rationale for Canada to stay in Afghanistan. After the most recent deaths, caused by a buried IED, the old familiar battle cries were heard from the government, media and military.

Canada’s foreign minister, Lawrence Cannon, called “for calm in the face of such a cowardly and despicable act….It is clear that insurgent forces have no regard for the lives of Afghan men, women and children. We encourage all Afghans not to be deterred from exercising their hard-won right to determine the future of their country by participating in the upcoming presidential election.” [2] Good sound bites but truly irrational. Cowardly and despicable are simply opinions, based on the emotions that arise from two of “our” troops being killed by the enemy. There is nothing cowardly or despicable about it…I would rather use tragic, painful, and well, yes, despicable, but not in reference to the enemy’s actions but in relation to the propaganda necessity of having our troops occupying a foreign country. Despicable that Canada advocates democracy, but does little to support it, does not recognize the context of its role within the U.S. empire’s attempted hegemony in the region, does not understand that most Afghanis want all foreign troops to get out, does not understand the double standards and contradictions that are involved with an invader protesting for democracy.

Almost a breath of fresh air

A recent opinion in one of Canada’s weekly newsmagazines argues to the right conclusion about Canada’s role in Afghanistan, mainly for the wrong reasons. The main argument of the article is that we should not be there because we are supporting a “guy who seems likeliest to hang on to power in Afghanistan…a fraud backed by thugs in the service of values we like to claim we could never support.” At least they are finally recognizing that Karzai is not their man for democracy, “the logical conclusion is that Afghanistan has ceased to be worth the effort [to make democracy] because the effort does not make immeasurably better on any axis that matters to its citizens or our own.” [3] Yes, Karzai may be a thug, but at this point in time there are not many power players in Afghanistan who are not thugs or drug lords, or simply really want the invaders to go home, the result of those many years of invasion and covert activities that manipulated and attacked the people of the country without regard for the lives of the citizens.

The real reason of course is that the war has been a fraud all along, that it is not about democracy or Canadian values, but about supporting the U.S. in its efforts to control the region. That soldiers and other people may believe differently demonstrates the effectiveness of the simple lie of the democracy propaganda and the lack of information on Afghanistan’s history and its importance solely as a buffer between empires – except of course as its importance as a homeland for war weary population.

All the way to the top

The tears wept by Canada’s Governor-General Michaelle Jean are genuine, as anyone’s should be for anybody killed in a senseless war (as all wars generally are, except those used to push back an aggressor and/or occupier, but even they are senseless for other reasons) whether a soldier, an insurgent, a mother, a child, or any other civilian caught in the crossfire generated by elite corporate and political interests. Beyond the tears, however, the words are the same old platitudes about democracy and values, the same democracy and values that cannot be demonstrated by an occupying army (consider that an army is probably the least democratic institution ever created). Very much in line with other government propaganda, Michaelle Jean says, “Know that your fellow Canadians are very proud of what you accomplish here and are very much aware of the sacrifices you make…You have come to this troubled area of the world to defend the democratic ideals to which all peoples should be able to aspire. You, who risk everything to create a safe environment . . . (for) the women, children and men of Afghanistan.” [4]

Well, no, I am not “proud” of Canadian forces in Afghanistan. That they are volunteers and wish to be there is fine, but when will the pretence for democracy be dropped in recognition of our real role there? It would be nice if our real role was reconstruction and establishing democracy, but that is not a possibility now or in the near future, and will not be as long as the country remains occupied. Sacrifices…suicide bombers…is there really a difference, other than the sacrifices are coming from the occupying force and the ‘suicides’ are from the indigenous people?

Michaelle Jean continues, “As commander-in-chief, I salute the many efforts being made as part of this dangerous mission that seeks to rebuild a country that has been ravaged by so much hardship, misery and inhumanity.” [5] Again, nice rhetoric but out of context. She needs to question herself as to where all this “hardship, misery and inhumanity” came from. Certainly the Taliban were and are not angelic, but the root causes are much deeper than a group of people, supported by Pakistan and their ISI and the U.S. support of them and other covert activities against the Soviets including support for mujahideen including bin Laden and cohorts….it’s a long story, much more complex than democracy replacing the Taliban.