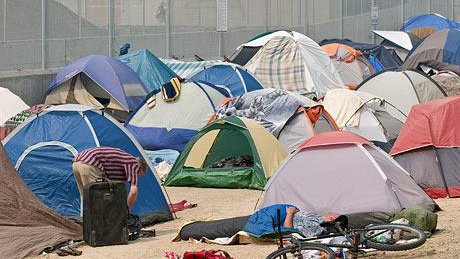 Tent cities springing up all over America are filling with the homeless unemployed from the worst economy since the 1930s. While Americans live in tents, the Obama government has embarked on a $1 billion crash program to build a mega-embassy in Islamabad, Pakistan, to rival the one the Bush government build in Baghdad, Iraq. 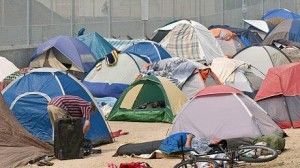 Amidst this worsening economic crisis, the House of Representatives just passed a $636 billion “defense” bill.

Who is the United States defending against? Americans have no enemies except those that the US government goes out of its way to create by bombing and invading countries that comprise no threat whatsoever to the US and by encircling others–Russia for example–with threatening military bases.

America’s wars are contrived affairs to serve the money laundering machine: from the taxpayers and money borrowed from foreign creditors to the armaments industry to the political contributions that ensure $636 billion “defense” bills.

President George W. Bush gave us wars in Iraq and Afghanistan that are entirely based on lies and misrepresentations. But Obama has done Bush one better. Obama has started a war in Pakistan with no explanation whatsoever.

If the armaments industry and the neoconservative brownshirts have their way, the US will also be at war with Iran, Russia, Sudan and North Korea.

Meanwhile, America continues to be overrun, as it has been for decades, not by armed foreign enemies but by illegal immigrants across America’s porous and undefended borders.

It is more proof of the Orwellian time in which we live that $636 billion appropriated for wars of aggression is called a “defense bill.”

Who is going to pay for all of this? When foreign countries have spent their trade surpluses and have no more dollars to recycle into the purchase of Treasury bonds, when US banks have used up their “bailout” money by purchasing Treasury bonds, and when the Federal Reserve cannot print any more money to keep the government going without pushing up inflation and interest rates, the taxpayer will be all that is left. Already Obama’s two top economic advisors, Treasury Secretary Timothy Geithner and director of the National Economic Council Larry Summers, are floating the prospect of a middle class tax increase. Will Obama be maneuvered away from his promise just as Bush Sr. was?

Will Americans see the disconnect between their interests and the interests of “their” government? In the small town of Vassalboro, Maine, a few topless waitress jobs in a coffee house drew 150 applicants. Women in this small town are so desperate for jobs that they are reduced to undressing for their neighbors’ amusement.

Meanwhile, the Obama government is going to straighten out Afghanistan and Pakistan and build marble palaces to awe the locals half way around the world.

The US government keeps hyping “recovery” the way Bush hyped “terrorist threat” and “weapons of mass destruction.” The recovery is no more real than the threats. Indeed, it is possible that the economic collapse has hardly begun. Let’s look at what might await us here at home while the US government pursues hegemony abroad.

The real estate crisis is not over. More home foreclosures await as unemployment rises and unemployment benefits are exhausted. The commercial real estate crisis is yet to hit. More bailouts are coming, and they will have to be financed by more debt or money creation. If there are not sufficient purchasers for the Treasury bonds, the Federal Reserve will have to purchase them by creating checking accounts for the Treasury, that is, by debt monetization or the printing of money.

More debt and money creation will put more pressure on the US dollar’s exchange value. At some point import prices, which include offshored goods and services of US corporations, will rise, adding to the inflation fueled by domestic money creation. The Federal Reserve will be unable to hold down interest rates by buying bonds.

No part of US economic policy addresses the systemic crisis in American incomes. For most Americans real income ceased to grow some years ago. Americans have substituted second jobs and debt accumulation for the missing growth in real wages. With most households maxed out on debt and jobs disappearing, these substitutes for real income growth no longer exist.

The Bush-Obama economic policy actually worsens the systemic crisis that the US dollar faces as reserve currency. The fact that there might be no alternative to the dollar as reserve currency does not guarantee that the dollar will continue in this role. Countries might find it less risky to settle trade transactions in their own currencies.

How does an economy based heavily on consumer spending recover when so many high-value-added jobs, and the GDP and payroll tax revenues associated with them, have been moved offshore and when consumers have no more assets to leverage in order to increase their spending?

How does the US pay for its imports if the dollar is no longer used as reserve currency?

These are the unanswered questions.