Gaza and the Language of Power 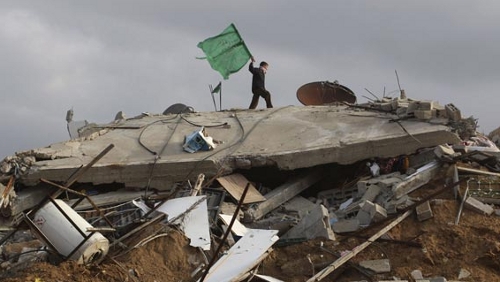 Nearly six months have passed since the Israeli army ceased pounding the tiny stretch of land that is the Gaza Strip. Since then, Gaza continues to appear on the news once in a while, as a recurring subject of human misery.

The tireless efforts of British MP George Galloway, and the courageous endeavors of the Free Gaza movement have managed to push Gaza back into the spotlight, even if momentarily and with political context which is lacking at best.

Aside from that, the three-week Israeli onslaught in Gaza starting on December 27, and the catastrophic conditions endured there, have served as a mere footnote in many news reports. The event is generally cited as such: “Israel moved against Hamas in Gaza to quell the firing of militants’ rockets, resulting in the death of such and such number.” Hamas, according to media conventional wisdom, is the “militant group that ousted Palestinian President Mahmoud Abbas’ forces in a bloody coup in mid 2007.”

Sadly, one’s worst fears have been realized, where the world of the post-Gaza massacre and that which existed before are exactly the same. Israel is trying to prove that political and military might overpower all human rights reports combined, and that public opinion, which turned against Israel as it wantonly killed and wounded thousands, will eventually turn back in Israel’s favor.

One does not need to be an expert in the art of propaganda to predict that the public relations model would allow Israel to deceive millions into believing that the belligerent state is in fact a victim in a sea of hostile Arabs hell-bent on subjugating the Jewish State.

Thus it was hardly a deviation from the script when Israeli Prime Minister Benjamin Netanyahu used a most shrewd term to depict his government’s refusal to respect international law regarding the dismantling of Jewish settlements in the West Bank, all considered illegal under international law; specifically, the Fourth Geneva Convention. He said during his recent trip to Germany that the West Bank will never be “Judenrein” a Nazi term meaning “cleansed of Jews”.

And once again, Israel is resorting to its traditional propaganda (such as equating Palestinians with Nazis), drawing on people’s historical sympathies, guilt and ignorance of false analogies.

Moreover, Israel’s National Security Advisor Uzi Arad is in fact reviving the discredited Israeli rhetoric that Israel has no partner in peace, in comments made to Israeli newspaper Haaretz on Friday, July 10.

He questioned whether there is in fact a Palestinian leadership that is capable of delivering peace with Israel. If such a Palestinian state were to exist, say by 2015, according to Arad it would be a “fragile structure. A house of cards.”

But he chose to omit that Israel purposely besieged and weakened the democratically elected Palestinian leadership in Gaza, while painstakingly propping and legitimizing Abbas.

It has been six months since the unprecedented and savage war against Palestinians in Gaza, and here we are making the same argument, referencing the same deceit and quoting the same outrageous claims.

During those same months, unsubstantiated Israeli accounts were countered with carefully composed reports by highly regarded organizations, such as the Red Cross, among others. Bombarded Gaza neighborhoods “look like the epicenter of a massive earthquake,” said a recent Red Cross report, entitled: “Gaza: 1.5 million trapped in despair.”

UN human rights envoy, Richard Falk summed up Israeli behavior in more direct terms, on Thursday, July 9. “There will be no peace between these two peoples, until Israel shows respect for Palestinian rights under international law,” Professor Falk said.

Israeli leaders, however, pay no heed to international law. In fact there is little evidence that Israel’s history was shaped, in any respect, by international standards, neither those pertaining to war nor peace. Israel only understands the language of politics and power. It is a state that has been constructed, and sustained upon Machiavellian wisdom.

Advisor Arad is perhaps the most visible manifestation of the logic that propels the Israeli state. In his recent interview, he demanded that once a state deal is reached with the Palestinians, Israel should be granted a NATO membership as a “quid pro quo”. To counter nuclear threats by others, he said, Israel must have “tremendously powerful weapons”.

Considering that Israel already has nuclear arms, one has to wonder to what other “tremendously powerful weapons” Arad is referring.  Arad must’ve been encouraged by US Vice President Joe Biden who said in a recent interview with ABC’s “This Week” that “If the Netanyahu government decides to take a course of action different than the one being pursed now (by the US and its allies), that is their sovereign right to do that.”

Once again, it is the brute logic that “might makes right” pursued by those with the bigger guns that continues to menace the Middle East, with Gaza being the most devastating example.

One must remember that Israel never heeds to statements, and is hardly moved by reports and random condemnations. Only pressure, constant and focused, will grab the attention of Israeli policymakers. Only the language of an international campaign of boycott, divestment and sanctions will translate in Tel Aviv to a legible political language.

As for Gaza, civil society must not wait for President Obama or any other to save the slowly starving population, but must take every possible and urgent effort to help an oppressed yet proud community to redeem its basic rights and freedom.