Clinton Outlines Continuation of Bush Policies Under Obama at CFR 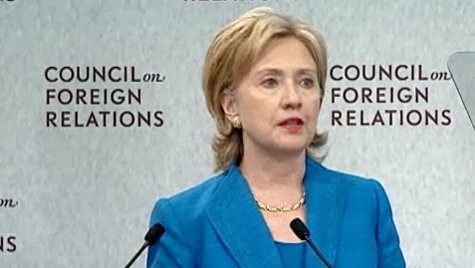 Hillary Clinton gives a speech on the Obama administration's foreign policy at the Council on Foreign Relations on July 15, 2009

Hillary Clinton gives a speech on the Obama administration's foreign policy at the Council on Foreign Relations on July 15, 2009

In a speech at the Council on Foreign Relations (CFR) on Wednesday, Secretary of State Hillary Clinton outlined the Obama administration’s foreign policy, which has been widely touted as a sharp break from that of his predecessor’s. Judging from commentary in the media, Obama has ushered in a new age of diplomacy and international engagement. Clinton herself suggested as much.

But setting aside the platitudes that comprised most of Clinton’s speech and looking closely at her remarks that actually spoke meaningfully towards U.S. policy under the Obama, a different picture emerges, one not of a change of course from Bush but rather of near perfect continuity between the two administrations.

Obama’s foreign policy parallels Bush’s. The train may have switched tracks, but it’s still headed in the same direction.

Take, for starters, the framework Clinton established early on in her speech. “Liberty, democracy, justice and opportunity underlie our priorities”, she said. “Some accuse us of using these ideals to justify actions that contradict their very meaning. Others say we are too often condescending and imperialistic, seeking only to expand our power at the expense of others. And yes, these perceptions have fed anti-Americanism, but they do not reflect who we are.”

See, U.S. foreign policy doesn’t really contradict enlightened rhetoric and declarations of benevolent intent from policy makers. The U.S. isn’t really condescending or imperialistic. It doesn’t really seek only to expand its power at the expense of others. No, these are merely “perceptions”, and false ones. The obvious corollary is that we musn’t change our policies, only work to correct these warped perceptions that cause people to unjustly oppose U.S. actions.

It hardly needs to be said that there’s nothing new about that formula.

The multilateralism touted by Obama is different from Bush’s unilateralism, but only slightly. The difference is that Bush openly declared that if you aren’t with us, you’re against us. Obama’s team is being more nuanced and diplomatic in talking about building the “architecture of global cooperation”.

But in the end, it’s still about  furthering U.S. interests as perceived by Washington and the corporate oligarchy. Cooperation and multilateralism, as it was under Bush, is fine, so long as it serves our “interests” as defined by that minority segment of the population. Obama’s strategy is quite different in terms of rhetoric about diplomacy, but the actual policy goal goals are indistinguishable from previous administrations.

One means by which policy goals are accomplished is through NATO, a matter that  Clinton addressed. She observed that NATO was designed for the Cold War. But rather than becoming obsolete with the end of the Cold War, even now, two decades later, NATO must instead be restructured “to update its strategic concept so that it is as effective in this century as it was in the last.”

This is precisely the same policy as previous administrations.

Or take Clinton’s remarks about the Israeli-Palestinian conflict. She says the Obama administration “wasted no time in starting an intensive effort on day one to realize the rights of Palestinians and Israelis to live in peace and security in two states”.

President Bush said exactly the same thing in not dissimilar language, only to implement an actual policy that fully supported Israel’s crimes against the Palestinians, including it’s 23-day full-scale military assault on Gaza beginning December 27.

U.S. policy under Obama hasn’t altered that framework one iota. The House of Representatives, for example, just approved Obama’s foreign aid budget that rewards Israel for it’s massacre of Palestinians in Gaza and other violations of international law with an additional $2.2 billion, on top of $555 million already allocated earlier this year.

Still, we are supposed to believe that the Obama administration is doing something “to ease the living conditions of Palestinians, and create circumstances that can lead to the establishment of a viable Palestinian state.” Clinton offers no evidence that the U.S. has done anything more than spout rhetoric about this, rendered meaningless by the U.S.’s actual actions.

Bush and Obama alike have paid lip service to the rights and aspirations of the Palestinians, but the actual facts about U.S. foreign policy point to an opposite conclusion from the one Clinton would have the public believe.

Clinton’s remarks on Iran similarly reflect perfect continuity from the Bush administration framework, asserting  “the Iranian march toward a nuclear weapon” as fact, despite the complete lack of evidence to support the claim, and even the conclusion of the U.S.’s own intelligence community to the contrary.

The Obama administration has made it’s position clear. It is willing to engage in “diplomacy” with Iran. The proposed “dialogue” and offer “to engage Iran” would entail “giving its leaders a clear choice: whether to join the international community as a responsible member” by acquiescing to U.S. demands to halt uranium enrichment, “or to continue down a path to further isolation” by refusing to accept the U.S. ultimatum.

This policy doesn’t differ from Bush’s one jot or one tittle, except inasmuch as it is an escalation of the Bush policy. “We remain ready to engage with Iran,” Clinton reminds us, “but the time for action is now. The opportunity will not remain open indefinitely.”

As Clinton has explained earlier, sanctions even more stringent than those imposed under Bush, “crippling sanctions” in her words, will follow. Iran must be punished for refusing to bow to the will of Washington, and if there’s a change, it’s that Obama is even more eager than Bush to inflict it.

The policy formula for Afghanistan and Pakistan is familiar enough: “In Afghanistan and Pakistan, our goal is to disrupt, dismantle, and ultimately defeat al-Qaida and its extremist allies, and to prevent their return to either country.”  This warrants little comment, other than the observation that Obama hasn’t only continued Bush’s policy here, but escalated it by “sending an additional 17,000 troops and 4,000 military trainers to Afghanistan.”

Or take Iraq, where the Obama administration is “developing a long-term economic and political relationship … as outlined by the US-Iraq Strategic Framework Agreement” that was implemented under the Bush administration. No comment is required here.

And what about U.S. policy towards “enemy combatants”? Clinton asserted, “We renewed our own values by prohibiting torture” — but torture has always been prohibited under U.S. law. Obama’s Executive Order didn’t do anything new, it merely reiterated already existing prohibitions.

Clinton said the administration is “beginning to close the Guantanamo Bay detention facility.” What she meant is that they’ve begun the process of beginning the process to close “Gitmo”. It’s a long ways from actually closing, and there’s plenty of opposition and other obstacles to overcome before this can happen, assuming the administration is sincere in its stated desire to shut Gitmo down.

There’s little reason to doubt their sincerity; shutting down Gitmo would be a useful way to do away with what has become a symbol for the unjustness of U.S. detention policy while doing little or nothing to actually alter that policy.

Obama, for instance, has not challenged, but accepted and reinforced the assumption of Executive power employed under the Bush administration under which detainees were captured and imprisoned in Gitmo in the first place.

On policy issue after policy issue, the continual torrrent of media commentary to the contrary aside, the Obama administration represents a continuation of the existing power establishment and goals and means of furthering U.S. strategic interests as defined by that very narrow and entirely self-interested segment of American society.

The CFR itself is among the prominent means by which these narrow interests perpetuate themselves. Clinton, herself a member, made some telling offhand remarks before beginning her scripted speech. Remarking on the CFR’s new headquarters in Washington, D.C., she said, “I am delighted to be here in these new headquarters.  I have been often to I guess the mother ship in New York City, but it’s good to have an outpost of the Council right here down the street from the State Department.  We get a lot of advice from the Council, so this will mean I won’t have as far to go to be told what we should be doing and how we should think about the future.”

And so it goes, business as usual.