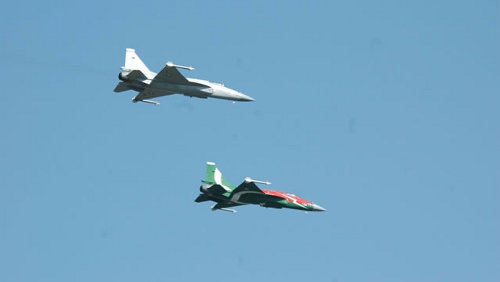 ISLAMABAD, June 30 — Pakistan Tuesday kicked off serial production of the multiple jet fighter JF-17 Thunder in collaboration with the People’s Republic of China.

In his address the Air Chief said, “The first squadron of the JF-17- Thunder will be inducted into the PAF [Pakistan Air Force] by the end of this year.”

The JF-17 is a lightweight, all-weather, multi-role combat jet aircraft. It is jointly developed by Pakistan and China. 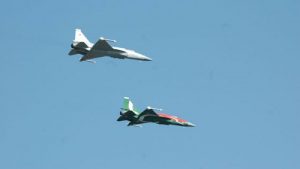 The Pakistan Air Force has so far received eight JF-17 jets that are being used for testing and evaluation.

During the first phase Pakistan will get frames from China and update the aircraft with latest technology from Italy and Sweden.

Pakistan has invested US $600 million in this project to induct a new generation of multiple-role jet fighters in the PAF’s inventory.

So far, the French built Mirage E-3 and E -5 remain the mainstay of the PAF, while General Dynamics/Chrysler F-16s (Flying Falcons) are also used.

Pakistan received the F-16s from the United States during the mid-80s, and the F-16 is now manufactured by the Lockheed Martin Corporation.

Pakistan and China had initially agreed on joint production of the JF-17 Thunder last March. Under the agreement, China will provide credit financing for manufacturing the jets.

During the first phase Pakistan will role out 42 jets. These jets will be equipped with capabilities like forward-looking infrared (FLIR) and radar homing beyond visual range (BVR) capabilities. The JF-17 Thunder is likely to be also equipped with Pakistan-Italian Griffo airborn radar, which Pakistan is manufacturing under franchise from Italy’s FIAR.