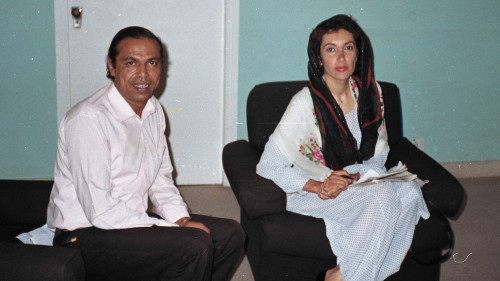 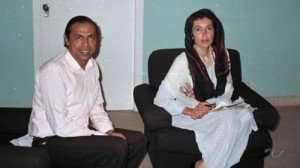 Benazir Bhutto, the daughter of Zulfikar Ali Bhutto and third Chairperson of Pakistan People’s Party (PPP), is almost a forgotten chapter within the government of her widower, Asif Ali Zardari. While her pictures are being used to promote various developmental and social projects, demands for a complete local investigation into her assassination seem only an agitation for Pakistan’s rulers.

A First Investigation Report (FIR) filed by the slain leader before the Sindh High Court after an October 18 bomb attack that caused over 150 deaths in Karachi’s Karsaz locality has been either closed or ignored. Bhutto’s assassination, carried out in a well-planned manner and with evidence being removed from the scene shortly after, has received the same treatment.

It’s known that the administration of U.S. President George W. Bush were keen to have a power sharing deal between Benazir Bhutto and General Pervez Musharraf. The original deal was initiated by the Islamabad-based former High Commissioner of the United Kingdom Mike Lyall Grant, but later on the initiative was grabbed by two top U.S. officials, Richard Boucher and John Negroponte.

Musharraf was apparently in a hurry to get the deal signed and keep Benazir Bhutto out of Pakistan during the election that had been announced for January 18, 2008. He held a meeting with Bhutto in Dubai but nothing has been spoken about what transpired there.

Finally during the summer of 2007, General Musharraf sent his Chief of Staff Retired Lt. Gen. Hamid Javaid to London to conclude the deal, which he did. But upon arrival in Islamabad, he was absent from public meetings. He reappeared on the day Negroponte was in Rawalpindi and tendered his resignation.

Everybody in Pakistan had expected Benazir Bhutto’s electoral success. She pulled crowds but sought to broaden her political base by forging greater alliances with regional parties, but refused any political arrangement with extreme Islamic parties and prevailed upon her arch rival Mian Nawaz Sharif to participate in the general election.

Sharif was still in Jeddah, Saudi Arabia, and while he was awaiting permission to travel back to Pakistan, Bhutto insisting that under the National Reconciliation Ordinance Sharif should be allowed to return.

Bhutto faced an initial assassination attempt on her life on October 18, 2007, when she was leading a massive caravan through Karachi after ending her exile. The suicide bombing killed more than 120, but Bhutto was unhurt.

General Musharraf openly stated that Bhutto’s participation in the election was not part of the power sharing deal. In his pursuit to perpetuate his autocratic rule, Musharraf on November 3, 2007, once again sacked the Chief Justice, claimed emergency powers, and appointed a judge of his own choice who would not contest his reelection to the presidency by the outgoing National Assembly while still in uniform.

At the same time Musharraf claimed a state of emergency, Bhutto was in Dubai. She made an air dash to Pakistan, started agitation against emergency rule, lent her party’s support for the deposed Chief Justice, and geared her party for the upcoming general elections.

All that time, Sharif remained in Jeddah and weighed lending the support of his Pakistan Muslim League-N (PML-N) to Benazir Bhutto for her struggle for a fair election. He wrote a letter to Bhutto seeking clarifications on a united agenda, in which he said, “It is my resolute conviction that after Pervez Musharraf’s abrogation of the Constitution on November 3, 2007, and the sacking of Chief Justice Iftikhar Muhammad Chaudhry together with other Supreme and High Court judges through a Provisional Constitutional Order, the necessity of the opposition parties taking a united stand against the brutal actions of Pervez Musharraf has become inevitable.”

Sharif was finally allowed to return to Pakistan. Bhutto was asked repeatedly by Musharraf and his close associates not to hold public rallies, while Musharraf’s main allies in the Pakistan Muslim League (Q) (PML-Q) had adopted a very aggressive tone towards Bhutto in their public rallies. And PML-N’s candidate Chaudhry Pervez Elahi went on to say that the “Queen of Corruption” was back.

When Zardari was in Musharraf’s custody in 2004, his Director General of Military Intelligence Nadeem Taj and PPP leader Qasim Zia tried to convince Benazir Bhutto to let her husband be in the driving seat. Zardari was freed and went to Dubai before returning to Lahore to test the waters and gauge his popularity. But the stalwarts of the PPP still favored Benazir Bhutto and blamed charges of corruption against her on Zardari. Upon  her  return  Benazir  Bhutto  had  complete  control  over  her  party.

Bhutto was assassinated on December 27, 2007. The Director General of the Interior Ministry Javed Iqbal Cheema has repeatedly said her death was caused by her head striking a blunt lever in the vehicle Bhutto was travelling in following a bomb blast that has been blamed on the leader of the Tehrik-i-Taliban Pakistan (TTP), Baitullah Mehsud.

But Bhutto’s former Interior Minister Naseerrullah Babar not only publically denied Mehsud’s involvement but said that after the first failed assassination attempt on Bhutto, Mehsud had twice conveyed the message to the PPP through emissaries that she was not his enemy and he had nothing to do with the attack.

Former President General Musharraf has also stated that Baitullah Mehsud was responsible for Benazir Bhutto’s muder. But where were top officials of the Rawalpindi police, including the District Coordination Officer and the Deputy Inspector General, who were supposed to be present on duty as protocol for the security of a former Prime Minister?